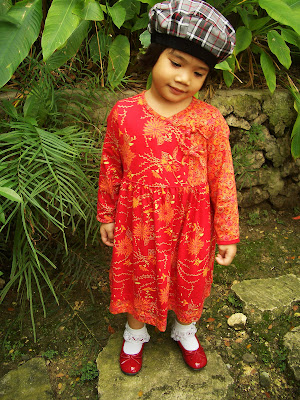 Here’s a little Christmas angel for you: Ana Louisa Mateo, three and a half years old. She and her family are Philipino and live in the Philippines so that they will grow up culturally Philipino rather than “American” (whatever that is) but her father, Louis, sometimes lived just two doors away from my mother and brother on 15th Avenue in Portland, OR. Louis and Paul were bicycling buddies as well as both being art professors, though Louis was actually teaching at Mt. Hood Community College and Paul had not worked since he hit his head so hard. But Louis was also attached to my mother, who was very fond of him. She had a real affection for all things Asian and had lost an uncle in the war over the Philippines, an early version of Vietnam. In fact, the uncle returned physically, but was so hollowed out by trauma and probably disease that he disappeared. Beyond that Louis and Lucy were really “into” plants and conferred over them often. And Mowgli, the cat, sort of lived in both households.

Louis Mateo is a fine artist in his own right. Portfolio at www.louismatero.com -- some abstract and some representational. Quite a range of styles, really. Paul posed for him sometimes. I remember one show of figure studies drawn with sepia ink and a twig or twigs, whittled to a point. Flexible thick ‘n thin lines, delicate and strong at the same time.

I’m not a big Christmas person, at least not the way people do it nowadays: big expensive trips, luxury gifts, debt that lasts until next Christmas. An aspect that I DO like and try to keep hold of is the idea of returning -- if only in memory -- to old places and remembered friends. So Louis’ photo is part of the proper festive mood of Christmas for me.

Across the street from Louis, long before he moved there, were the Simmies. They had a button factory in the basement where they made buttons from thin sheets of agate and other semiprecious stones. They had glued-on shanks, as I recall, rather than holes. My mother used to work there so we sometimes had fancy buttons on our Pendleton wool shirt/jackets, which everyone in Portland wore daily.

Last week Scoop Simmie, their daughter just a bit older than myself, sent me a heavy Christmas package that I couldn’t decipher from the outside. When I opened it, I laughed and laughed! It was a great big snowball candle, the kind my mother used to make at Christmas. The wax was sold by my father’s wholesale ag co-op employer and she used to do demonstrations of how to make it into candles at meetings of farmer’s wives. She was even on local television once. The candles were touted as “glowing” when they were lit. The big ones were made in halves in mixing bowls and then you whipped the wax with a fork to make “snow.”

The Easter eggshells were a little trickier. You had to fill up balloons with water and dip them over and over to make the shell. Then you let the water out of the balloon and cut the edge of the wax so it looked as though a chick had just escaped. Once at a demonstration she had a table full of water balloons ready to dip when one unaccountably untied itself and sent up an arc of water, in my mother’s words, “just like a little boy.”

My grandmother Strachan, Beulah, got the family started in the neighborhood by picking out a house on NE 15th when the family moved from Brandon, Manitoba. I’m sure the big house, which had belonged to a doctor, reminded her of the Brandon house. It was a few blocks south (uphill) of Alberta Street and my father bought a house a half block north of Alberta. My mother said (only partly joking) that she married him for that house and that’s where she eventually died many years later. (What’s 1938 from 1998 -- sixty years?)

Fifteenth Avenue runs perpendicular up and over a ridge that is parallel to the Columbia River (E/W). The crest of the ridge is along Prescott and then Alameda, along Alameda Ridge, off towards Mt. Tabor. I expect there were once Indian camps along that ridge. I used to walk the half-block to Sumner and stare across the drop-off to the West Hills. On a scooter you could get up a little speed on that side of the block if the plum tree hadn’t loaded it with pits. Fifteenth had enough incline that when my mother’s funny green going-to-college coupe wouldn’t start, she’d make my brothers get up and push it down the hill. By Killingsworth, it would lurch into action.

My mother was eventually deeply woven into the society of this neighborhood. It had begun as a little country town more like the place she’d grown up, but that was before she came. In her young married life it was quite a European immigrant place with businesses along Alberta that had apartments upstairs for the owners. There was a trolley along Alberta, which was its lifeblood. The seats were along the sides, woven cane, and when one wanted to get off, there was a little pearl button between every two windows. One wore gloves to go downtown in those days and I put my dime fare in the tip of one finger until the trolley came. I could only jam the coin in there because the glove was stretchy, crocheted.

Just as in a small town the school was the center of society for the mostly young families at the time. Programs and carnivals and drives to make money for charitable purposes. The PTA -- all ladies with hats -- was a powerful force. At Jeff Hi and at Benson Hi, the dads took over. We had not a doubt in the world that we were all doing the right thing.

In later years there were buses and one ran down 15th. After the Vanport flood, which was like a mini-version of New Orleans, the displaced black population moved up to north and northeast Portland, surrounding and then infiltrating the modest little homes. Gangs and drugs came along. Syringes turned up in my mother’s compost bins. If Paul hadn’t been there, she would have retired to a teachers’ home, though sometimes she was glad she didn’t have to because of the yard. The lowest point was just a while before she died. She was at the bus stop and came home hotly indignant. Some black man had come up alongside her and stood there and “wagged his wienie” at her. “The ignorance!” she raged.

But she put off moving and stayed interested. Charles Moose, the first black Chief of Police, bought a house from some old sisters my mother knew in what she called “the get - tow” and started a turnaround. Alberta had closed and collapsed enough that it presented an opportunity for artists to find low-rent spaces and that was the way it came back. Galleries, coffee shops, bodegas, and one valiant woman whose coffee shop courtyard was planted with flowers in the shape of Africa.

They tell me our house still looks well-maintained. Louis still owns his house plus one across the street and has enough relatives and good friends to keep them occupied. Scoop’s house hasn’t fared so well, but Scoop has. She lives not far from Jeff Hi where she and I both graduated. Her mom was Philippina, as beautiful as Ana Luisa. But that’s another story...
Posted by Mary Strachan Scriver at 2:45 PM