This post was actually prepared for Paul's daughter. Paul is the younger of the two boys and died of a heart attack last March. Mark, the older, is living happily and healthily in New Mexico. I'm the oldest, 68, living in Montana. The family then was living in Portland, OR, in NE Portland, believing that life was safe, slow-moving and even boring. My father brought my mother here as a bride and she died here in 1998. Paul lived with her until then because of a head injury. 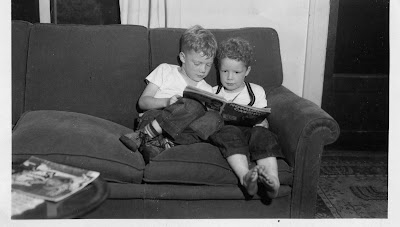 We were all big on cowboys and horses. At about this time the movie star Hopalong Cassidy rode in the Portland Rose Festival Parade. We were situated at the east end of the Broadway bridge and "Silver" didn't much like the whole scene, beginning to balk and even hint at bucking. Mark and Paul so badly wanted to run out and touch that horse, but Hopalong became very testy, warning everyone to get back! 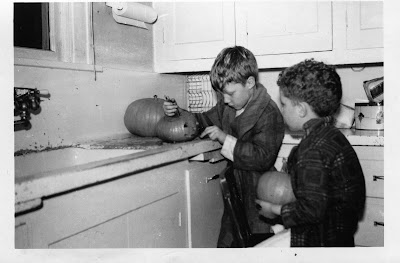 The counters in this old kitchen were concrete. The original stove was probably wood or gas. One cupboard had a hole in the back to the outdoors so that it could operate as a "cooler." If the climate here were more even, I could use one of those! Mr. Otto, who was a good carpenter, converted the cabinet under the counter in front of Mark so it was a flour bin that tipped out. We always had a good time at Halloween. My mom would drape herself in a sheet, put goop all over her face and draw on terrible scars -- then she'd hand out one black jelly bean at a time, saying in a quavering voice: "Here's a zombie bean for you, my pretty!" Once my father squatted down, opened the door, and jumped forward yelling "BOOOO!" One little kid was so scared he fell off the porch into the cotoneasters, so we didn't do that anymore. 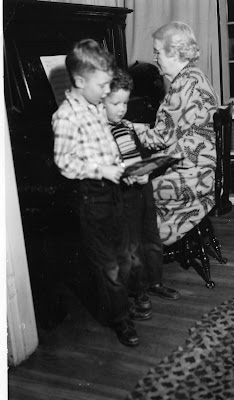 Grandma loved to play for us to sing: old favorites, classroom songs and the like. We all briefly took piano lessons. Grandma may have made this rug for us and it was originally "her" piano, sold to the Bruce Strachan family to get through a tight spot. My mother loved to play it, too. It was in the "sun room," a windowed porch off to the north side of the house. 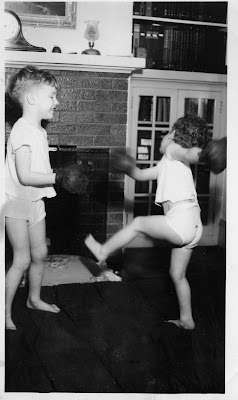 The albums behind those glass doors are what I'm deconstructing and sending you now. Up above on the shelves is my father's collection of 78 records, mostly classical, which my mother sold after he died. Paul was always a hard charger who got a little off balance, while Mark stayed safe. 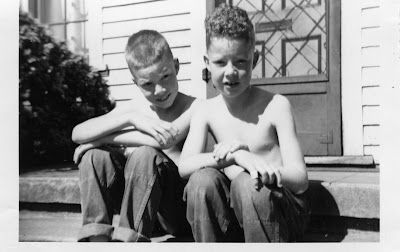 Something tender about little boys with their cuffs rolled up. Looks like these jeans had double knees. I don't know whether they came that way or my mother customized them. 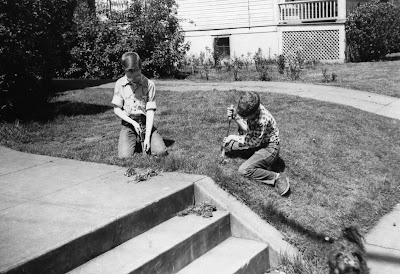 This is our front yard but looking at Hanisches next door. Bob Hanisch was very proud of his rosebushes. This must have been Spring. They're using the kind of hand tools that Strachans always like. The one Mark has slid like a nail-puller, I think -- but maybe not. We had a very useful bayonet, army-surplus, and a machete, likewise. One year my mother decided to REALLY improve the lawn and ordered a load of chicken manure. She didn't realize it was not composted and we didn't use the lawn that year until after the fall rains, but it was really GREEN.
Posted by Mary Strachan Scriver at 3:25 PM

My brother Sid Gustafson told me about your blog site... I have really enjoyed reading your comments. Thank you for writing about your life and life in Valier.

Hey, Erik! I think I might have met you when you were a little guy. Bob Scriver and Rib Gustafson were equally (as they say in Montana) "characters" -- but there's more to it than that. Stop in if you go by. 709 Montana. Two blocks from the PO.

The bio of Bob Scriver is shipping now. Amazon will give you a good price break, but they're slow, estimating the first week of March.