BET ON THE BLACKFEET GRANDMA

Wilfred P Schoenberg, S.J., never got no respect though he was a Jesuit which showed he was not stupid and was part of a long tradition of dealing with Native Americans. However, he was no match for a determined Blackfeet woman, Mae Williamson (Many Victories, a name she bestowed on Barbara Stanwyck when the latter was on the rez filming “Cattle Queen of Montana.”) Here’s a story that is NOT in Schoenberg’s book, “Indians, Cowboys and Western Art: A History of MONAC.” (Museum of Native American Culture)

Schoenberg had a vision for a museum next to Gonzaga University and covered the country begging and leveraging donations, either of objects themselves or for donors, subsidizers, benefactors, etc. He heard that Mae Williamson had an exquisite elk-tooth-decorated traditional dress. When he came to Browning, Montana, in search of it, he stopped at the Scriver Museum of Montana Wildlife where he saw a sculpture called “Transition,” which depicted Mae -- who was an official interpreter as well as being the first female member of the Blackfeet Tribal Council back in the Thirties -- standing in the middle with one hand on Chewing Black Bone, ancient blind warrior, and the other on a school boy. It’s a very fine piece and Schoenberg felt he just had to have it. He wanted a bronze, $3500, and soon realized that Bob Scriver had NO intention whatsoever of giving a casting to any itinerant priest intent on creating a competing museum, though it would be in Spokane. But at Mae’s house he saw a casting of “Transition” and expressed desperate interest in both that and the dress. She put him off. He went home to search for money.

In those days Bob always gave his models a hydrocal casting of the piece for which they posed. Hydrocal ™ is a very hard form of plaster which sets up to be something like china, but is never fired in an oven. It is susceptible to shattering and chipping, but if that doesn’t happen, hydrocal should last indefinitely: forever. They were finished to look like bronzes and sold for 10% of the price of a bronze: $350. This was how Bob got started before he could afford to cast bronzes. Local people and George Montgomery bought hydrocal castings made by Bob himself.

At this point Mae brought into the shop her casting of “Transition,” complaining that it had a few unsightly chips in it where the white hydrocal showed through and would Bob fix those places? It only took a few moments to repair the damage and Mae took her casting home. When Schoenberg showed up again, hoping for the best, Mae sold him her hydrocal for $2000, which the Father thought was a wonderful bargain. Until he got it back to Spokane, went to unload it from the car and dropped it. Then he was probably more shattered than the sculpture, esp. since he had twisted the arm of some donor for the $2,000 who was shortly coming to view it.

The chances of getting the money back from Mae were nil. In the first place she was in residence on the reservation and had put her land and house back into trust with the US Government. In the second place, he had never asked what the sculpture was made of though he should have realized it if he’d had any background in art. In the third place she’d already spent the money on a splendid coffin for her newly deceased husband -- it had a tooled leather cover lining that said “Empty Saddles.”

At an early point in her life Mae had been married to a white lawyer and ran rather a splendid household by local standards. (She was Gary Schildt’s grandmother and had a hand in raising him.) When Bob and I married, her gifts to us included a purple Hudson’s Bay blanket created to honor Queen Elizabeth II at the time of her coronation. It’s in the artifact book, “The Blackfeet: Artists of the Northern Plains,” so it ought to be in the collection of the Royal Alberta Museum in Edmonton now.

I have no idea where the elktooth gown went. Schoenberg managed to ace out the Buffalo Bill Historical Society for the entire Sherburne Collection of artifacts -- a far more splendid, complete and historic collection than the Scriver Collection that raised such a furor. It was transferred to MONAC with no publicity at all, despite Eula Sherburne’s daughter Faith objecting even as she wrote an expensive insurance policy for the transfer, which Father S. resented. Not the insurance, the cost. Eula was the wife of J.L. Sherburne, the second generation trader who had a hand in almost everything financial around the reservation, quite unlike his father, J.H. Sherburne who was the original owner of the collection.

When MONAC went belly up, the collection, along with everything else, went to Cheney-Cowles, a second Spokane museum, and from there it has wandered in de-accessioned bits throughout the world. A Blackfeet man who tried to trace as much as he could said he located one piece in a collection in Chile. The inventory listed it as “a duplicate.” What Father Schoenberg achieved, in essence, was to create a depot for fine things where wheeler-dealers could find them. He is deceased. I hope Saint Peter has him by the nape of the neck and is forcing him to look.

Father S. reports that his health was bad his whole life -- terrible headaches coming from a drive to overachieve, weak lungs, etc. -- and the book mixes accounts of terrible bouts of vomiting with marathon narrow escapes in millenial storms driven through in faulty old cars -- regular Oregon Trail stuff, easily rivaling the exploits of Father DeSmet if not his achievement. There is constant noting of his poverty, the lack of heat where he worked, the various injustices and misunderstandings imposed by his superiors. He was evidently a veritable Rodney Dangerfield of Jesuits.

But oddly, the foreword, written by Van Kirke Nelson and Paul Masa, appeals to a quote in a letter from Charlie Russell to the Methodist Brother Van, who didn’t even have a second-hand car but walked everywhere. “Saints and Sinners were gathered there that night.” I didn’t identify any known saints. Plenty of sinners. These years were the beginnings of the Flathead Valley Art Mafia, a subsidiary of the Industrial Cowboy Art Cartel. A little cadre of physician opportunists stripped several artists. Tom Sander paid the highest price: his wife, his house and his son, now attached to Dr. Vranish.

The trouble with Father Schoenberg, and many another, was that he knew nothing about art except what he was told by wheeler-dealers, whom he believed because they flattered him. Fortunes were made, but not by MONAC. 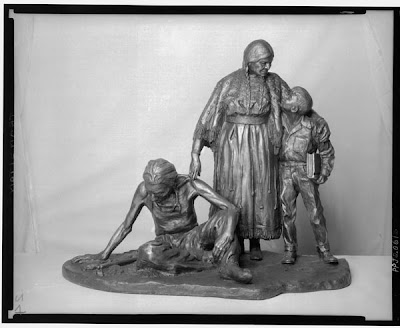 What a marvelous story! Glad to see the blogging hasn't trickled to a stop. I'd be in withdrawal if it did.

Thanks, B. You'd have really enjoyed Mae Williamson herself!

Just came across your site while searching for the right Reverend S. Great story. Don't suppose you know if he really had the sculptures of Voisin do you. Just read that in Bill Harmsen's book.

Feel free to email me at
kirsch_california (AT) mac (dot com)


I just came across your site while researching Blackfeet and Piegan tribes. I'm seeking information on my heritage; also clarification. I'm the biological daughter of Herbert Jerome "Mace" Williamson (Indian Name: KT ET SA - WO-WAKI, "WalkingThrough Space). Mace is the nephew (or possibly son, I'm unclear) of Mae Aubrey Corburn Williamson (Indian Name: Many Victories"), the first woman tribal leader and who was married to Harvey Williamson back in the '30's. I believe she also married a Governor of Montana.

If anyone has info they would be willing to share, please contact me at 858-354-8187 via text or phone or via e-mail at janneswing@me.com.