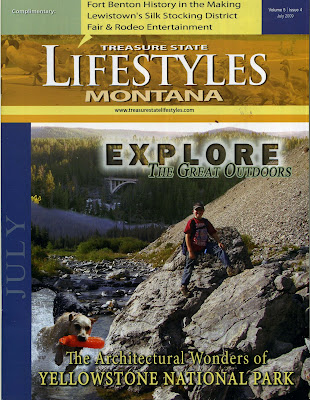 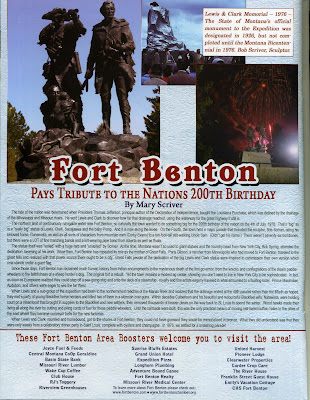 For two days in a row I’ve traveled to adjacent communities, on Monday up to Browning for the dedication of the new high school and then on Tuesday to Conrad to do some interviewing for free lance articles in “Treasure State Lifestyles” which does Regional Community Coverage for north central Montana. Online at www.treasurestatelifestyles.com. This is a monthly giveaway publication you might find in waiting rooms or those little wire stands in the foyers of grocery stories. Though it’s not so upscale as something like Big Sky Journal, in it’s own way it’s more “Montana,” because it is by and for locals. Big Sky Journal is on the newsstands in big cities and is meant to support high end tourists. It comes from sophisticated high-density college towns.

One interview I did from home via telephone: that was the Gustafson family whose patriarch is Rib Gustafson, a big rumbustious veterinarian married to an artist wife in the best Western pattern. When I was asked to interview “a Gustafson in a law office” I assumed it was Rib’s only daughter, who is a lawyer, but as it turned out the woman in question was Susan Gustafson who grew up in Poplar and married an unrelated Gustafson.

The other interview was Mary Pouray, daughter of Dorothy Floerchinger, whom I knew as a local historian whose scrapbooks now occupy 34 feet of shelves at the University of Montana library. Mary's address was “Big Sky Villa.” In the phone book the address of the “Villa” was 701 Minnesota (the streets are named for the states) but I paid no attention to the north/south indications and ended up at a supported living “tower” on the wrong end of town. The ladies there set me straight.

I discovered that Big Sky Villa is a complex, the converted housing the Air Force “sold” to the town for $1 when they pulled out of their cold war activities in the area. Norby Hall at one edge of this compound, much upgraded, serves as a community meeting hall for many conferences and town halls and a theatre for the Pondera Players. Since I hadn’t gotten a house number, I stopped at a nearby complex that serves children who need special services. I had no idea that such an institution existed anywhere this side of Great Falls. The place was humming with preparations for the school year but cheerfully stopped to help.

I was directed to “the house with the goose wearing crocheted clothes” and, sure enough, there it was. But Mary Pourray, daughter of a major progressive force in North Central Montana, was not a frivolous woman. Nor did her house look like an Air Force barracks. Her elegant little duplex was furnished with beautiful objects from a trip to France to find her husband’s French roots: dolls, demitasse cups and a big P stamp for branding sheep with paint.

At the law office I butted in on a spirited conversation about Wall Drug Store, that phenomenon of advertising! It is indeed a drug store, but made famous by billboards far and wide, and furnishing in large part souvenirs saying “Wall Drug Store,” like the fellow who was famous for being famous.

What I’m thinking about today as I write up these articles is that I was interviewed about as much as I did interviewing, even in Browning. I don’t normally mix with people, partly because writing so much means that one is turned in on oneself without filtering, so in spite of writing about myself it is always from MY point of view! Kind of a bubble. When these people began to ask questions, I suddenly began to see me from THEIR point of view, a person who is quite different. I worried them. I was too frank.

We had a lot of overlap. I started out to be someone like Mary Pourray, teaching kids English in the small town public schools, or indeed like her mother, Dorothy, who taught here in Valier. Or I thought in the very beginning that I would be like Susan Gustafson, a mainstay of the local amateur theatre company, acting and directing fine productions of classics. But I ended up being pulled off course by Bob Scriver, whom they all knew superficially because of stopping into the Museum. Mary remembered meeting me when I was skinny and had red hair. Fred DesRosier in Browning remembered both Bob and I all through the decades (His ancestors got to Browning half a dozen years before the first Scriver came, about the same time Charlie Russell showed up.) Fred is one of the few locals I’ve met who has read “Bronze Inside and Out,” already knowing everything. (He said I did a good job, which pleased me very much.)

Mary asked me about family and whether they were nearby. Susan and I talked more about things like the wonderful “thrust” stage in Choteau and whether the school people really understood what they had. Fred DesRosier and I talked about new books about the Blackfeet. He’s quite deaf now and gets frustrated, but reading works. Among them they had an excellent understanding of the political forces of this east slope way of life, the tussles between right wing libertarians who want untrammeled free enterprise and left wing do-gooders who want no child to go hungry, both on and off the rez. To them those forces are concrete and name-by-name. They don’t think in abstracts so much as I do and aren’t inclined to borrow trouble from issues that are alive in faraway places. And yet there is a strong arts-conscious community, quite skilled. They aren’t exactly what you might call “cutting-edge,” mostly because they are getting older. The You-Tube generation doesn’t want to stage Oklahoma.

Except, remarkably, in the last ten years in Browning, staging big-time musicals has been exactly what the high school has wanted to do. The Conrad people do not go up to be in the audience. The excuse is distance, but I think the real reason is that they feel alien there. They have no awareness of how alien I feel in Conrad! Sometimes I even feel a little out-of-it in Browning. I don’t participate in Valier either. In my virtual reality I live in the English BBC world and the Paris Cinematheque world. It’s actually quite comfortable that way, unless I go trekking around. Then suddenly I seem like a tubby old woman with white hair who is somehow deprived. It’s disconcerting.
Posted by Mary Strachan Scriver at 10:05 AM