WHAT IS CLASS? WHAT CLASS AM I? 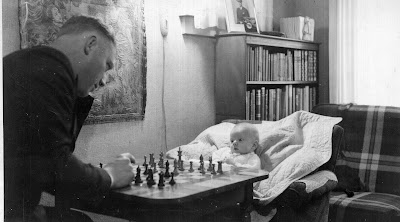 My father played chess, which we thought was a great mark of sophistication.

About 1950 I remember a discussion at school about the difference between the working class and the middle class which caused me to come home and quiz my mother. (Who didn’t much like talking to her children about life but could be waylaid sometimes when she was doing something that made her stay in place -- “I stand here ironing” -- Tillie Olsen)

“Are we middle-class?” I asked.

“Are we upper or lower middle-class?” I was pretty sure we were upper middle-class because we had so many books and my father liked classical music. We were more educated than the neighbors, though both my parents grew up on dirt-poor farms. Our Portland, OR, neighborhood at that point was mostly immigrant European craftsmen and working stiffs.

“Go change your clothes.” The rule was that you had to wear your school clothes at least twice before they went into the wash so you had to keep them clean. “Play clothes” were to be worn for a week. I had no “work clothes” and my parents had no “play clothes,” but I never thought about that. My mother wore “house dresses.” My father wore giant double-breasted suits from Monkey Wards and wool ties in Scots tartan. If you went downtown, even aged twelve, you wore white gloves and a hat. Men wore hats everywhere all the time, except indoors. Children had piano lessons, not a guitar. 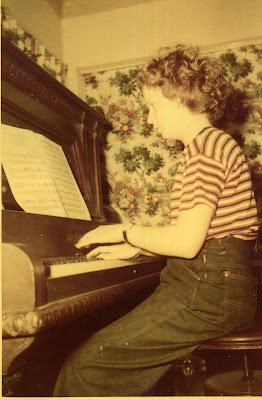 For the last few years, for lack of a curriculum, I’ve been hopscotching through big ideas proposed by interesting men, some of them real people I know, some college professors, and some who turn up in magazine articles. I’m particularly interested in theories of knowledge and society: Merrill Singer, Kim Sterelny, Clay Shirky, Robert Sapolsky, Mark C. Taylor. Sometimes I go back through the shelves of books I saved to read when I retired. I have two copies of Peter Gay’s “Education of the Senses” (sub-titled "The Bourgeois Experience: Victoria to Freud.”) which suggested that I should finally read it. I think I bought it because of the “senses” more than class, but I’ve always been interested in class.

Back to my mother, still ironing and wishing she were not. “Are we high-brow, low-brow or middle-brow?”

“You didn't practice your piano lesson yet.”

Our sophomore high school teacher was the national president of the National Education Association and my high school was Jefferson High School, one of the best in the nation. We were very proud. That teacher, whose father was a prominent lawyer, brought three magazines to class. They were the television of the time. An Atlantic Monthly (quality), Life (slick) and I forget the last one which was pulp. It was not the Police Gazette, which my father hid behind the dirty clothes hamper. He kept his chess mags out in the open. Surely chess is high-brow. He played Tschaikovsky and Beethoven on his big phonograph cabinet. Gay suggests these things are bourgeois, and so was our way of thinking about them.

My mother had no time to deal with these things because she was ironing -- and cooking, and cleaning, and maintaining the yard. (She wore pedal-pushers in the yard.) She was a do-er and became a dynamic president of the PTA, a use of time my father rather resented. She went back to school, which the Depression had forced her to drop out of, and became a teacher in 1957 so she could put me through college. By then it was clear that my father was not going to rise through the classes, though we were beginning to feel financial limits. We resented this, not understanding until much later that a head injury in 1948 was mentally disabling. The promising young man, the pride of his birth family, kept his job through good will and conscientiousness, and kept us from realizing the problem by being on the road all the time. 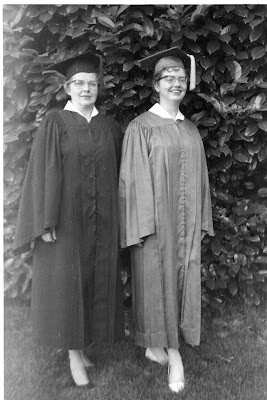 When my elderly free-thinking junior English teacher heard that I had a scholarship to Northwestern University, she said, “Oh, that’s wonderful! Now you’ll know rich people!” I could not puzzle out what she meant. But somehow I got the idea that she meant brilliant, cultured people -- high-brows, upper classes. Actually, I didn’t run into them until later at the University of Chicago. There I learned that even the Atlantic Monthly and Beethoven were not high brow: one read journals in one’s field and listened to either Mahler or Miles Davis. But I hung onto the idea I had developed at Northwestern: that art trumped them all. If you really knew art -- even if you were not necessarily an adept or famous -- you had escaped the relentless pressure to rise through the classes. When I married Bob Scriver, I found a new relentless pressure: to be a genius, though a woman was allowed to deflect the mission by supporting a genius. He’d better be worth it.

Marriage, a certified education that guaranteed a decent job, a nice house with a well-maintained yard, and prosperity -- these were the markers of success in life. But another element crept in: service to others. I figured this out in a package deal: ministry. But the education for ministry made it impossible to have a vocational life in a rural environment. (I was a Unitarian Universalist, which requires a city of at least 100,000 to assemble a congregation with this point of view. There are no cities in Montana that big.) By this time -- late middle-age -- all I wanted was a return to the scene of my youth, not just Montana but the Blackfeet Reservation. Like a thunderclap came the Internet, which made it possible to live in a village while participating in the city of ideas.

But it also destroyed the publishing industry I had thought would justify my choices. How many people get through life by promising themselves they would someday write a book about it? Some actually manage it. Or did before the marketing department, uneducated yahoos, decided what would be published or not on the basis of hot sales, shutting out all challenges to the status quo. But did they? Ten minutes signing up for a blog and the genii is out of the bottle.

That’s where it stands now. What class am I? What is the height of my “brow”? Is this “art”? (Why must I put everything in quotes?) Am I prosperous, a success, a credit to my family? My family has dispersed. One side is so locked into the pursuit of money that they have abandoned decency and sometimes the law. The other side quietly prospers (mostly) after decades of quiet honorable toil they did not enjoy. They do not understand the collapse of publishing, which was such a dependable touchstone of the bourgeois to which we have always thought we belonged. They read novels in bed. In the Fifties their mothers made their clothes to save money; in the Twenty-tens, they create one-of-a-kind elegantly embellished jackets and garden on a sophisticated level.

But this bourgeois thing that Peter Gay is analyzing: there’s something there . . .

When Allen Ginsberg read “Howl” at Reed College in 1956, I was a junior in high school but I didn’t know about it, much less did anyone suggest I attend. At our house we had an ambivalent relationship with Reed College. It was partly because my father, who had attended ag colleges, was attracted to Unitarianism and Reed was founded by Unitarians. It was a place for free spirits and intelligentsia, what would later be called the Counter-Culture. The other side of the tension was my Presbyterian mother who had attended Lewis & Clark College when it was Albany College, denominationally supported. I suppose both Reed and Lewis & Clark were and are on the border between middle and upper classes, with Reed (high brow) tending towards the avante garde and Lewis & Clark (middle-brow) defending respectability. Their poet was William Stafford, not Allen Ginsberg.

I used the Reed College library a bit during those years, because I was reading about Commedia dell Arte and they had books on the subject. I was conscious that this was a very “enriched English” thing to do and impressed by the beautiful hushed library. I was considered a “brain,” though I didn’t get straight A’s. But I was a finalist for a National Honor Society scholarship, which meant that I took an exam at Reed while a roomful of chicks peeped in the next room. (They were someone’s psych project. Skinner was “in.”) Out of a class of five hundred, two of us qualified for this test. The other girl was rich, arrogant, beautiful, and led a life as varied (and entangled with Indians) as mine was. We ran across each other now and then over the ensuing decades but weren't friends.

Like haiku, Commedia dell Arte has become a kind of middle class favorite, along with Shakespeare, Picasso, Pollock, and Edith Hamilton’s interpretations of Greek drama, -- all popularized among the bourgeoisie by Life magazine. That’s how I knew about them. The only way to escape Life magazine was evidently to be wicked, but even then they liked Beats and Mafia and were converting them to pop culture. Their dark sides were all turned to the wall. They were not role models because they were geniuses. By this time I knew I was no genius.

If I had not gotten a scholarship to Northwestern, which was the alma mater of my dramatics teacher, I would have gone to Reed, though my mother didn’t see why Portland State College, where she went (and my cousin) wasn’t good enough. The idea was to become a teacher, nothing more or less. I always wondered what would have happened to me if I’d gone to Reed.
Posted by Mary Strachan Scriver at 9:08 AM

You pose for photographic portraits with your right foot forward -- you are upper-middle class.

My high school drama teacher taught us to stand like that. When I was teaching in Heart Butte -- the most old-timey of the Blackfeet communities -- the girls were posing for portraits at the prom and standing as though they just dismounted from horses -- some of them might have. I taught them to stand this way and the meme spread. Now they are all upper middle class! It was so easy! Thanks, Darrell!