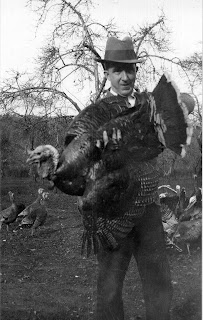 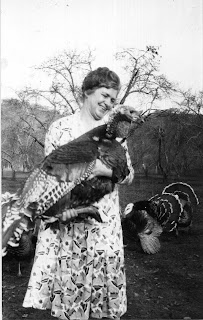 These are my maternal grandparents, John and Ethel Pinkerton, maybe in the early Forties.   I was a pre-schooler when they and a lot of other people in the country thought they would get rich raising turkeys. I remember these turkeys vividly, because when I went out to their yard at an age when I was hardly taller than they were, they suddenly turned and advanced on me, en masse. I was sure their intentions were dishonorable because even as individuals they looked nothing like chickens. I KNEW chickens. I even FED chickens. It never occurred to me that the turkeys might have rushed me because they thought I was going to feed them.

As it turns out, turkeys are kind of tricky to raise. They catch diseases. They don’t come in out of the rain. They die of disinterest or something. The other problem is that every time there’s a craze for raising something or other, EVERYONE does it and that means that when it’s time to sell, there are too many chinchillas, guinea pigs, ostriches or turkeys. The market is flooded: no profit.

These turkeys my grandparents raised were not the white front-loaded monstrosities that people eat now. They weren’t that many generations removed from wild turkeys, which are fairly wily and resourceful. In fact, YouTube has several vids showing turkeys on the attack. http://www.youtube.com/watch?v=hhh68bITXM8 Clearly, I was right to be wary.

Today, sixty years later, in Roseburg on the ranches of my relatives, there are wild turkeys, or maybe feral turkeys, which they feed inside box traps until they want to eat one. Then they simply drop the trapdoor. That way, you don’t have to worry about losing a tooth by biting into a shot pellet on Thanksgiving.

When I told Bob Scriver about this, he got all excited and wanted a wild turkey to mount for the Scriver Museum of Montana Wildlife, now dispersed. My aunt sent a gobbler, frozen, in the mail. I had walked to get the mail and at first set off for home with the turkey in my arms but it was very big and very cold -- I ended up dragging the package down the road by the strings. Bob mounted it against the wall and put a spotlight on it, so it looked splendidly iridescent and indigenous with its wings spread out and its wattles authentically spray-lacquered. Ben Franklin would have approved. It was iconic.

When I found these photos at the top, I spent a long time looking at them -- not the turkeys, but my grandparents. I don’t remember them at this stage in their lives. My grandmother died of cancer, quite young. She was a sweet, gentle woman. Her funeral was the first I ever went to. At this stage my grandfather, whom we called “Pop,” because that’s what my mother called him, was still the fiery, contentious, and promising young gent he continued to think he was until he was a doddering old man. He died in the Roseburg, Oregon, truck explosion in 1959. A load of fertilizer -- not at all meant to be a bomb -- was parked downtown and spontaneously blew up, cratering twelve square blocks. Pop was sleeping on the sofa under a picture window that blew in, but that didn’t hurt him. He thought it was World War III, an atomic bomb, and had a heart attack, dying a few days later. I don’t think he wondered why Roseburg, a quiet timber town in those days, would be bombed. I think he believed that he himself was likely to be the target in a World War.

The marriage of my grandparents was one of those “opposites attract” or at least fit-together relationships. Ethel Cochran’s mother had died young and her step-mother was critical and overbearing. John Pinkerton was quite willing to be Ethel’s champion.  It was a love match.  My mother was the oldest daughter and quite a lot like her Pop, though she tried to be like her Mom. Father and daughter ran headlong into each other -- two fierce fighting birds. But yet in the Fifties when it was clear to my mother that she needed to finish college so she could take up the economic slack my father left, it was “Pop” who came through with the tuition money. At last. For he had started to put her through college in the Thirties. For the last year she attended, he presented her with a bag of seed corn, a big leased mule, and a piece of bottomland. The idea was that if she could get a good corn crop, it would pay the tuition. She did get a good crop. It was not enough money. What made her bitter was discovering later that there was a family scholarship for which she qualified, but he never told her about it out of pride. He considered it charity. 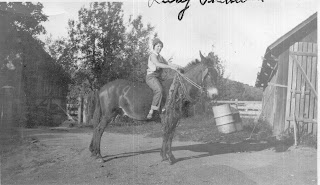 This is the mule. She had no fondness for it and the writing on the photo was NOT the name of the mule, which has gone unrecorded.

My parents’ marriage was a flipped-over version of my grandparents’ marriage -- that is, my mother was the ferocious proud one and my father was the quiet gentle one. If you were in danger, you needed my mother. If you wanted a splinter removed, you went to my father. My mother taught me to drive a nail straight. My father taught me to sweep a floor thoroughly without raising a lot of dust. In both marriages, the man traveled and the woman stayed put. In both marriages, the man never quite made enough money. My grandmother raised chickens and sold the eggs. After her aborted college years my mother worked in town, carrying the eggs in and bringing the money back. She generally threw in a little of her own money without letting anyone know. I think my grandmother suspected and was grateful.

My life has been nothing like the lives of these two women, or their husbands either, though superficially I inherited my father’s love of books and even some of the actual books. But in some way their lives have taught me how to take on the turkeys and the mules of life. (I could figure out the cats and chickens without help.) I’m thankful for that heritage.
Posted by Mary Strachan Scriver at 3:59 AM

Lovely turkey photographs and lovely stories, Mary! That mounted turkey must have looked splendid. I remember admiring the iridescent feathers on duck necks and pheasant plumage when my Dad brought birds home for dinner. Also biting down on the shot left in the meat!

Freezing in Portland this morning. This weather is mild compared to Eastern Washington or Montana winters, but for Portland it's quite frigid. Our big Lab, who is usually impervious to cold water, was unhappy about having to go into the Willamette yesterday (my husband took the hint and kept the ball on the beach after that!).