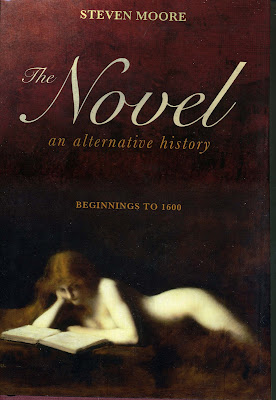 Ham Smith, my cousin’s husband, sent me the book above, a big fat one, the first in a series by Steven Moore.  I loved the image on the dust cover and I figured he sent it to me because of that, since both my cousin and I have red hair and our families made a fuss about it, partly because it was “emergent” red hair -- none of our parent or grandparent generation are red-headed, but our great-grandfather Archibald was, along with the legendary temperament.  Recessive genes will eventually out.

The painting is by Jean-Jacques Henner and is called “La Leseuse.” (1880-90).  When I looked him up, I finally discovered who had painted the original of a little print I’ve had for fifty years.   I’m not sure Ham knew that I had it.  The glass on the front broke and I’ve put it aside until I could replace it.  This one is called “Solitude.” 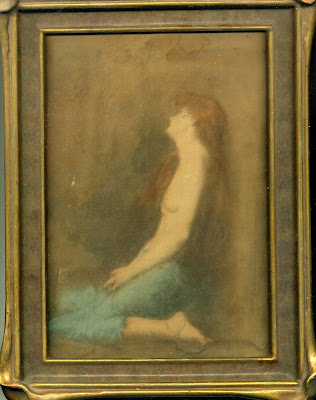 Normally it hung in the bathroom.  I put my nudes in there.  And I keep a big book in there for the intimate intervals.  I’d just finished Peter Gay’s “Education of the Senses” and needed another big book to replace it.  By the time I’d read a few pages I was thrilled to realize that I’d found another book as insightful and delightful as Gay’s much appreciated re-framing of the 18th century English convictions that continue to plague us so with their bourgeois pretensions and convictions, their hierarchies and aversion to change.  The received wisdom about novels has been as pedantic and self-serving as our received wisdom about sex.

I’d read only a few pages when I began to wish for a high-lighter.  Then a page or so later I realized I was lucky there was no high-lighter in the bathroom because I’d be highlighting everything!  It’s a genuine paradigm shift, a defense of outliers that moves the high ground out from under the feet of the smug establishment.  The sub-title is “An Alternative History” and is it ever!

Religion has been a victim of rigid, hierarchical, dogmatic way of thinking that came out of the desert trinity of Judaism/Christianity/Islam, hinging everything on the nature of the “chief” of the tribe and enforcing its edicts with threats of torture.  But in some circles it has surrendered to the new evidence of genome, molecule and cosmos to re-envision the world as a place of infinite interacting forces, always in motion, rippling and bubbling with every tiny flick of the butterfly.  Now Moore points out that novels are the same: just another name for story.  This volume is about the beginnings to 1600.   A second is intended.  It will get harder as the history becomes  less winnowed by time.

I’m not even to the end of the introduction.  It goes VERY slowly to read material this rich and, of course, I did rush to the computer to google up some articles and biographies.  Moore can actually explain William T. Vollmann -- well, point out things that are very helpful since probably no one can explain Vollmann.  (That’s in an article, not this book.)  Moore is undeterred by flim-flam about what is reality and what is fiction and what is made up and all that nonsense.  Nor does he veer away from the ugly and overwhelming.  He is global in terms of nationality and period.  (My mother’s all-time favorite book, “The Tales of Genji,” is one he likes as well and I guess I’d better nab me a copy and read it.  I guess I’m grown up enough now to find out what her secret life was like.)  And he despises that tangle of barbed wire called “post-colonial, post-structural, etc. etc.  that forced us all into such ungraceful postures for a while.  (It’s not that the ideas were wrong -- they were just so unfortunately presented.  It was the attitude.)

So far, Moore is offering other people’s definitions of what a novel “is.”
E.M. Forster:  “any fictitious work over 50,000 words.”
Jane Smiley:  “A novel is a (1) lengthy (2) written (3) prose (4) narrative with a (5) protagonist.”
Moore himself (augmented by a quote from Calvino):  “A prose composition longer than a short story, either fictitious in content or in its treatment of historical events, ‘worked out with an eye toward a strategy of effects.’”
Jane Austen:  “Work in which the greatest powers of the mind are displayed, in which the most thorough knowledge of human nature, the happiest delineation of its varieties, the liveliest effusions of wit and humour are conveyed to the world in the best chosen language.”

Extending that along the lines begun, my guess is that the future of the novel is already embodied in “graphic novels” (which he points out was a Mayan form of novel!)  and cross-media narratives so long as they are coherent and evocative.  He figures coherence is something the reader achieves, not a pre-determined given.

I particularly like the copy on one of the end flaps of the dust jacket.  Moore is described as “pugnacious.”  (I think I’m related.  Possibly he once had red hair.)  One never knows who writes flap copy (sometimes they haven’t read the book), but this is what the person said:  “Though Moore regards literary novels primarily as ‘performances’ -- authorial chapters of style and technique -- he does not neglect their value as cultural criticism.  For the history of the novel is also the history of the rivalry between secular literature and sacred scripture.  Indeed, Moore holds that the “secular scriptures” of literature provide a better guide to life than the sacred scriptures (fictions of a different sort).”  That’s why people are always dragging in morality.

This fits exactly with the “Five Percent” book explaining that people who get stuck in one version of reality become troublemakers because they try to force everyone into their template.  If they succeed, they have murdered, because when they prevent growth (which is change) and punish outliers (who can save us all), they have killed time and existence themselves.  This is the crux of the dilemmas of small towns, reservations, nations, families, and seminaries -- that they experience everything -- except what they already know -- as some kind of assassin’s plot.  Only when that confining assumption is broken open like an egg can the story continue.

I think I’ll revisit “story theology.”  It was sort of stuck -- maybe some of this stuff can renew it.  Who knows what recessive genes might be waiting, nude, for either a lover or a book.
Posted by Mary Strachan Scriver at 5:23 PM