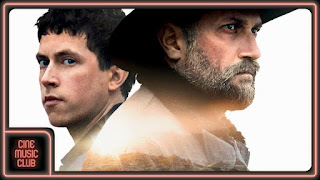 “Cowboys”, also known in France as “Les Cowboys” is a deconstruction (French philosophy term) of “The Searchers.”  Thomas Bidegain is a French screenwriter, producer and film director, who often collaborates with the director Jacques Audiard.  This is the first film Bidegain has directed as well as writing.

“The Searchers” is a famous American Western in which John Wayne, the epitome of frontier cowboy manhood, goes in search of a young woman kidnapped by Native Americans,  because according to his code she is going to be debauched and desperate to be saved.  Anyway, she belongs to HIS people.  He’s completely derailed when it turns out she has, for whatever reasons, become a Native American and he is not welcome.

My view is that this “take” of “Cowboys” as “Searchers” is legitimate but not the only one.  A film that could only be interpreted one way would be simply flat.  If you don’t like the idea of deconstructing the “man code”, you might like this alternative review.
http://www.rogerebert.com/reviews/les-cowboys-2016

The idea of the American West is introduced in the beginning by a family attending a cowboy “faire” which may be real, but is also a reference to the European love of imitating American Indians by setting up lodges and making artifacts of great accuracy.  In this cowboy permutation the French folks sport big belt buckles, cowboy hats, and fancy cowboy boots.  Strangely, there is at least one Hell's Angel in full leathers.  When the Big Dude in the cowboy shirt whom everyone loves and who sings “The Tennessee Waltz”, gets home, he takes off his hat, revealing he is bald in the fashion of left-wing French intellectuals and artists.

The most major deconstruct is breaking the film in half according to generations, which may be the message.  The father -- whose daughter goes off voluntarily with her Muslim boyfriend -- is convinced to the point of obsession and destruction of everything, including himself, that he MUST find his daughter and that she is suffering.  The reactions of the other men are enlightening to us, but not to him.

It all depends upon him, he thinks.  For him the “Indians” are gypsies (wrong India) and she has simply disappeared into their world, but the gypsies are perfectly capable of expelling him from their camp.  He is a personality formed by “settler empires” who succeed by violence and ego, dominating whatever is in their way.  For this kind of man, it is necessary to act as a lone hero while claiming group honor and patriotism, a birth entitlement.

Once the old man is out of the way, the son takes over the story and now it is a bildungsroman, the story of a young male growing up through journey and adventure.  He follows the goal of finding his sister, but no longer in order to own her back.  Now we really are in a modern version of the “American West,” but in terms of a huge frontier land as presented by Afghanistan and Pakistan, their tribes and languages.  This world is as tumultuous as 19th century America.

Because he seems intelligent and reliable, the youngster is useful to others, esp. a man very like the early fur-traders, except that he trades in people — or so he says.  Now the characters are on horseback, though the horses are the local kind with curly ear-tips.  And now it is Muslims who are the "Indians".  The trader advises the young man as they sit by their campfire that some kinds of men are simply never going to settle down with families and communities.  He speaks eloquently of “big sky” countries which is where he himself fits, a frontiersman who needs space.

There is a shoot-out, a mistaken one, and the young man has now murdered. Luckily, no one liked the victim much, though he was the man with whom the sister originally left.  The “sheriff” and jail are frontier-style, susceptible to bribes, but it is the modern phenomenon of the diplomat defending a citizen that saves him.  Showing his character, the son insists that the wife of the man he shot come along with him.  Now SHE is the one removed from her homeland and culture, but at least she can certainly ride a horse!  The female re-enactors of the West don’t like that one bit.

It's a spoiler to tell, but the resolution is that the brother does find his sister, almost by accident.  He is recognized, but there are no words between them.  They simply see who they have become, the once-defiant daughter now living a modest working life and the once-seeking son now finding more intimacy with a woman unrelated in any way but shared experience.  But he finds he can settle in a home with a son of his own.

I may be over-interpreting all this, and it does seem like the plot is almost cold-bloodedly developed for the sake of the argument, but the actors and the settings bring them to life, esp. for those of us who have known these two kinds of men and have seen how the “times” formed them.  Clearly the issues have always been re-enacted in both new places and old places, among old cultures and new cultures.  This universality will keep the film alive for a long time, but only if people know about it.

It wouldn’t be necessary to enjoy this film with “The Searchers” but for a class discussion, it would enrich understanding.  As a footnote, I’ll say that I showed “The Searchers” in a rez high school (Heart Butte) in 1990.  Though there were John Wayne fans in the class, the plot line was totally unintelligible to them.  They liked the big dominant man figure, but couldn’t figure out what Natalie Wood had to do with anything.

I also showed “Soldier Blue” which is meant to be allegorical for My Lai and Vietnam in general.  Some of the scenes are shot-for-shot based on memorable news footage, like the head rolling towards the camera and the man who is executed with a shot to the side of the head.  But there was no television in Heart Butte, so the echo didn't work. The kids actively disliked it.  At the same time the first NA curator of the Browning Museum of the Plains Indian, Raymon Gonyea, had painted a Picasso-style portrait of a Vietnamese woman crying out in terror and grief that attracted praise in a show of NA art.  IF you had television and knew the work of Picasso.