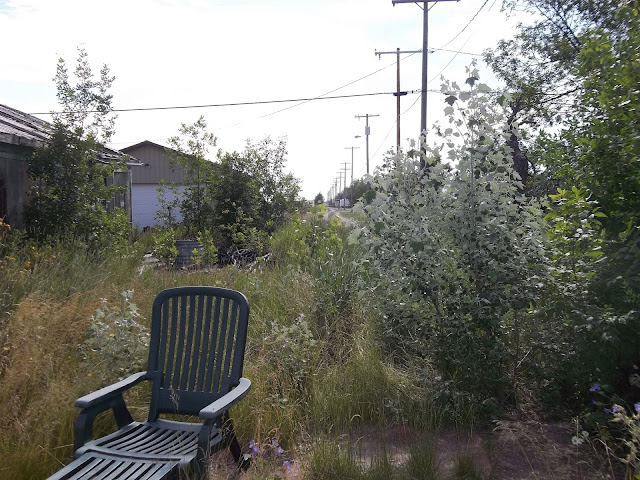 If it’s a perfect storm at sea, what is it when disaster strikes from all sides in one’s yard?  This is my yard, which most people would agree is a disaster, except maybe an ecologist.  There’s an animal bed of some kind right in the middle.  Maybe dog, maybe griz.  (I look for them but never see them.  No phone calls on the telephone tree.  No news from the bear vigilantes.)

I’ve received a letter giving me the day after tomorrow as a deadline to mow my yard down to the conventional astroturf height.  Otherwise, a $150 fine.  Maybe $250.

My diabetes has gone out of control.  I’ll probably need to go to Great Falls for the doc this week.  Wednesday is my “payday” when I do the month’s grocery shopping and laundry.  There is no way to meet the deadline of day after tomorrow.  Ray, the mayor, has said he will “work with citizens” so long as we are making good faith efforts.  So I went over to get a stay of execution and got it.

We also got into politics a bit.  Most of Ray’s working life has been military so I threw down the glove:  “This is not a military compound.  It’s a little country town with a shrinking economy that talks about disincorporating.” 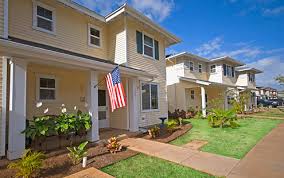 Then we got to the serious stuff.  He hates Obama for being “weak” and admires Trump for being “strong”.  None of the news about betraying America to Russia gets through to him.  He doesn’t believe it.  Time will tell.

So now I have to go a lot deeper and also to ask myself why I am so emotional about this issue.  (I wouldn’t be QUITE so emotional if one of the feral cats hadn’t had kittens last night, a process of screaming and running all over the house smearing blood which kept us all from sleeping.  It was 90º, unusually hot yesterday, and the night didn’t cool until nearly daylight.)

It’s about expectations and the major shift in American life over the last two decades, even in this small backwater.  The main change is that the Valierians don’t want to BE a backwater now.  They want to be important and admirable and to grow, which they believe will happen if the town looks prosperous.  They see the riots and misfortunes on television and notice that the nabes were shabby and neglected to begin with.  And the people are dark.

Quite a few military or quasi-military people live in town, but not a Pondera County deputy, which has been the case in the past.  They like it here because not much happens.  Pondera County sheriff, Highway Patrol, Border Patrol, Homeland Security, FBI, ICE, ATF, and so on.  Many of them are former military.  Borderlands law applies to 100 miles from the Canadian border.  Valier is 67 miles away.

The census people say that 20% of the population is Native American.  They don’t give their criteria: enrolled or not, blood quantum, etc.  There are no Black or Asian people that I know of and only one Mexican.

I’m such an isolate, leaving the house only for the library or gas station, that I don’t have a very good handle on a population that I only cross paths with occasionally:  older, maybe retired, men without families.  (A few women as well.)  They are not free spirits: no career artists or writers or dancers.  No band leaders, no veterinarian.  No doctors, lawyers, clergy or counselors live in town.  (I’m excepting me.)  A pretty good fraction of the population in town used to be the grandparent generation from farms and ranches nearby.  On my street they have mostly died of old age and been replaced by young families, who build on more bedrooms.

No bars, as such, but always the usual underground drugs and theft.  A lot of drunk driving and domestic abuse, but that doesn’t register.  A few men who live locally but not primarily in Valier, own a little old house as a refuge for binges.  Maybe disguised as fishing.

I’ve already tried to address the problem of the demographic hole in the doughnut: many people use the town amenities but pride themselves on not being stupid enough to live inside the town boundaries, just in the postal district.

The bottom line is that people here are not inclined to think outside the box.  No new businesses are started; some move into town.

Military residential tracts are supported by federal money.  Taxes are paid by a replacement law substituting federal money, as is the case on an NA reservation.  This takes care of infrastructure without taxes from citizens who are individually responsible for maintenance.  If there is anything the military has in abundance, it’s skilled manpower.  Small towns everywhere are feeling the loss of plumbers, electricians, carpenters, and appliance repairpersons.  Few are willing to mow lawns for hire, even if it’s a flat lot with a riding mower.

Much of how people guide their lives is economic necessity, but also there is a cultural component.  We have put college degrees ahead of almost everything else, believing that this is the key to security.  But it’s not.  It’s a map out of town and a put-down of those who stay here.  Worse, college degrees are so necessary that they are like marriage licenses used to be — maybe they mean something and maybe they don’t.  Too many people think they have college degrees when they only have post-high-school degrees, Education-Lite.  (Sort of like the nurses-for-doctors switch.)  Not a life-skill that teaches people to learn, but a document soon made irrelevant by time and technology.  And sometimes an outright racket.  Even worse: consider Missoula where people get raped in the dorms and the profs smoke only the finest pot, send the low grade stuff to the rez.  (I can’t tell you how I know this.)

My emotional surge over the state of my yard might be seen as strange since my job with the City of Portland was regarding exactly these issues.  We addressed nuisances of all kinds, debris of all kinds, including dead bodies.  Noise was a major issue.  Yards that gradually fill up, esp. with rusted steel machine parts that are all too available in shrinking railroad and shipping centers where warehouses stand empty.  One city crew did nothing but board up abandoned buildings.  This is the context of most crime shows on TV and therefore the mental context even here in Valier.  We feel with our guts that if we can keep all that out, we will have saved ourselves.  I went on ridealongs with inspectors so I know how bad it can get.  Far worse than anything in a small High Line town.

But we slip into the same attitude that the Portland nuisance inspectors came to when people were defiant.  “Don’t get rid of the complaint.  Get rid of the complainant.”  The other day I heard a man describing how the sheriff was ignoring him, though he had real troubles.  He had been got rid of, made invisible.  I ration calls to the sheriff very carefully to keep from being labeled a curtain twitcher.

My expectation was to live in this ramshackle house, writing until I die.  Since 1999 this has been possible.  I’m proud of my writing, which is not in “books” but in an accumulated body of work over time that reaches around the planet, not printed in books but forwarded endlessly.  In a way my problem is that I’ve lived too long.  In another way it is that there are too many people and they are nothing like me.  I am an Arab to them, but I’m safer if they don’t know it. 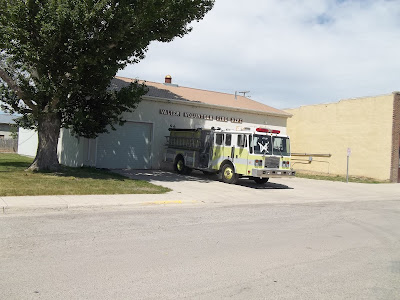 
Ray is a good mayor.  He has the foresight, connections and drive to do things like get us a new fire engine, badly needed.  I respect military backgrounds.  (My brothers were Marines.)  But there is a big difference between being military at a base in Montana and being military in an occupied country where the fighting is either guerrilla-style or bombing raids.  Who can be sacrificed as collateral damage without people paying much attention?  Valier is more like the latter and yet not like either.  There are no commanding officers here.
Posted by Mary Strachan Scriver at 12:55 PM