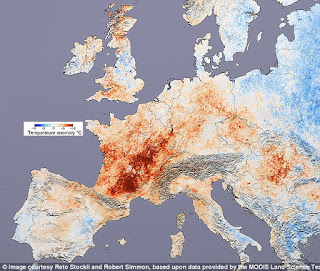 The dynamic process of life itself is variation and then the relationship between the group and the individual, whether variation is tolerated and encouraged or destroyed.  When the larger context — let’s say planetary — changes, the strategy becomes crucial because the outside forces may either destroy the whole or the non-conforming part, whichever is better able to survive, but leave the other to continue.

This is true of life forms from bacterial biofilms to herds of buffalo, as true in small towns as in megametropolises.  Right now as the climate of the planet changes, regardless of what causes it, gigantic chunks of antarctic sheet ice break off.  One degree of warming in the ocean kills the coral and dead coral means a hundred dead life-forms.  There are heat waves in particularly concentrated places that are killing people.  The most vulnerable and most likely to die are the old, the sick, the young, the poor, and the solitary.  No need to discuss why, because that’s perfectly obvious.  It’s planetary.

In rich countries, there may be cooling centers provided for street people.  In countries based on forcing conformity and criminalizing nonconformity, the deportable families may not go to such life-saving spots because ICE knows they might come and it is easy to catch them there.  In poor countries people just die in the streets or in dark huts that were not cool enough.

We are aware of this and our consciences may be uncomfortable — although not-knowing is becoming a respected moral choice.  People say they are working and don’t have time — so we speak of it in euphemistic terms.  In Europe during the most recent death wave the statisticians spoke of “harvesting.”  The comparison was to predators like wolves or lions taking down the young, old, crippled, slow and sick prey, as having finished their life arcs and being “ready” to be removed, thus improving the health of the herd.  Human decision, one by one “death panels”, are not involved.  Deaths are what I call “pencil deaths,” failure to fund life-saving measures.

Out in the fields around here the alfalfa is about all cut and rolled into giant cylinders.  The wheat is not quite ready for harvest yet.  These are vegetable life, conformed by planting, prevented from reproduction in the field by harvesting machines.  If the weather is good for crops.  Even plants succumb to heat and in the eastern part of Montana that’s looking likely this year.  The talk is of dust bowls.

When times get tough enough, people are harvested.  But before their bodies die, even before their minds are dulled, their morality may collapse.  Sometimes it is those with the most thorough educations — let’s say lawyers — who can hopscotch the law and the government through the realities from which prosperity shields them.  Or so they believe.

When I first moved back and before I managed to establish contact with my niece, who will be my surviving inheritor (not that there’s much to inherit), I asked a lawyer to take responsibility at my death.  He was VERY reluctant, which I didn’t understand.  A brother of a lawyer explained to me that behind the scenes in Montana there is an issue about lawyers’ handling of the estates of certain kinds of persons.

Imagine a crusty old bachelor who came to Montana as a single young man— maybe a traumatized veteran — breaking ties with any remaining family, and threw himself into hard work on a piece of land.  In fact, he worked so many hours and was so exhausted at the end of the day, so far out from town that he rarely went in to social events but only for supplies, that people sort of forgot he existed.  Or were a little bit afraid of him.

Maybe he was an immigrant who didn’t speak English that well.  Maybe he was cranky and didn’t get along with people and loved his horse or his tractor more than people, to the point that no woman set out to catch him.  Or maybe they did, but he outlived them for some reason.  Maybe he lost his whole family to the Spanish flu and never tried to start another.

So now we’ve got an old man who has created a generous estate but has no heirs, maybe not even a charity he wants to honor.  I don’t know if anyone has made a study, but I have a feeling there are quite a few “old bachelors” like this along the Montana HiLine.  The laws are arranged so that a clever lawyer can acquire control of that estate.  It’s a kind of harvesting connected to death.  The morality of it is protected by discretion and consensus of peers.  No challenges.  Maybe speculation but mostly secrecy.

Let’s look at another moral justification: gathering old, sick, troublesome, mentally disturbed or criminal people into one place so that they can be managed efficiently as a group.  Usually this is a state function but the designed oversight costs money and do-gooders never think the standards of care are good enough, so the idea strikes the legislators of “contracting.”  Contractors are private, so they can hide, bribe or rationalize what they do.  It works so well that it extends to police, military, and political torture.  The minorities, the broken families, the poor, the disreputable are harvested by contract.  They are the wheat that falls before the reaper, but they always manage to reseed themselves.  No need for planting.  They spring up by themselves. fertilized by stigma.

Morality — I’m not talking about ethical philosophy but about practical daily choices and priorities — has been challenged in many ways over the past century.  The steady sequence of war and recession has been matched by dizzy periods of prosperity that deify (DEIfy — make gods of — the opposite of deny) extravagance and selfishness.  It is thought to qualify someone to be the president of the USA.

The vengeful and destructive morality of sexuality of gender roles that existed before the invention of the pill has not been transformed into respect and love, but has degenerated into hookup culture that erodes families that are only based on reproduction without creating mechanisms for other ways to cherish and raise children with the protection of bonded and committed adults.  The birth rate is falling; the death rate for infants is rising.  They are harvested.

This is a rant, a tirade, a prophet’s outrage.  I would not be able to talk this way if I were still serving a liberal congregation.  (I would never serve an illiberal congregation.)  I am only barely tolerated enough to write this blog because few here read it anyway.  I try to be an isolated old bachelor woman except for monitoring the town council.  Once in a while they talk about contracting out the infrastructure.  Sometimes I wonder whether I am the fringe that will die, or whether they are the whole that will be destroyed by the changing world.

Time to put in the window air conditioner.

Posted by Mary Strachan Scriver at 11:00 AM

Europe, heat and old people. Yes, it's a fact that Europe -I speak for the german speaking countries as I don't exactly know how it is handled in others- happily accepts that old people die like the flies whenever it gets warm. Every summer. This year is especially "efficient" in making room for new inhabitants of the residences. And it's not a joke either, that it truly is regarded as a means of freeing up space.
Meal on wheels services in the cities who deliver to old people at home even reduce their staff during summer because this is so common.
All would be outraged if people died of the cold.
It's a troublesome thought. And a bit surprising everyone is okay with this in our times.
And there is one reason for WHY all these people die: because air conditioners are bad. They wouldn't even be legal in a senior residency. So they let them die rather than try to get the needed papers in order to be allowed to install (efficient) air conditioning. But even if we had AC... I doubt it would be used more than in absolute peak times as an emergency measure because of "climate change". And our houses are mostly built to catch as much sunlight and heat as possible in addition to being so over insulated, they lose almost zero heat even in winter. I don't know a single person who has air conditioning installed... not even window air conditioners. The social pressure is so high, people still drive with AC off to save the planet. ...we will have an AC installed in our home next year -we just moved in late winter, so this is trial year. I can't stand the heat if I can't cool down from time to time -never had trouble back in Florida summers even working outside for long hours. Here... I'm no good for nothing. Even reading is a real chore.