This is maybe the third version of these thoughts, partly because research is constantly changing focus and partly because the world is changing.  We are mostly fussing about North America, but this is a world event with no future end.  There are so many elements and unknowns that all of us are only guessing.  Many of them seem contradictory or hard to imagine.  The vocabulary of cell investigations alone are a challenge.

I’m reminded of a fly-killer that was guaranteed effective and very cheap.  When it came, it was a little block of wood and a small mallet.  The directions said, “Place fly on wood and hit with mallet.”  Right. Sure fire! But elusive.

We assume it is an unexpected virus but there are early versions. MERS and SARS were meant to be wakeup calls, but naturally Trump cancelled everything projected to address them.  Bats have 500 versions of corona virus, any of which could morph again.  Fear of bats is not so silly after all.  So far six corona viruses have been found in humans, though four were mild.

“COVID-19: Caused by one virus, the novel 2019 coronavirus, now called severe acute respiratory syndrome coronavirus 2, or SARS-CoV-2.
Flu: Caused by any of several different types and strains of influenza viruses.”  The symptoms overlap.  Ironically, the precautions for Covid-19 — like handwashing — are also diminishing the number of flu cases.  Why weren’t we doing this all along?  They told us to, didn’t they?

These are RNA viruses, which means that though animals/cells that have a double helix in their genome nucleus (two strands embracing around a corkscrew), the virus only has one, like a spermatozoa not yet met up with an ovum.  (PCR is a test, “polymerase chain reaction”.)

“DNA is used because at the most discriminating level, the structure of DNA can tell you what organism is being looked at. In the case of humans, PCR can identify a person using his or her genetic signature. In the case of COVID-19, researchers have published more than 100 genomes collected from patients to identify key features of the virus that causes that disease, SARS-CoV-2.

“But there's a wrinkle.

“PCR only works on DNA, and the COVID-19 virus uses RNA as its genetic code. RNA is similar to DNA, but only has a single strand. Fortunately, viral enzymes to convert RNA into DNA were discovered decades ago, and have been harnessed, along with PCR, to find unique signatures in RNA, too. In this case, PCR is referred to as reverse transcription PCR, or RT-PCR.”

The reason there is no “cold” vaccine and flu vaccine has to be redeveloped every year is that they both have single strand RNA, so there is no second entwining DNA to provide backup correction.  Humans, who are double-strand, do have this backup.

Here are links to some of the more interesting and reliable posted articles that I’ve found.

“Covid-19 is closely related to the original SARS virus. Both are members of the coronavirus family, which is entirely distinct from the family that includes influenza viruses. Scientists know the shape of proteins on the new coronavirus’s surface down to the position of individual atoms.” (The Atlantic — Ed Yong, one of the best writers.)

It appears that the proper answer to most of the questions we have is still “yes and no” and “it depends” and “well, there’s a lot of overlap”

I remember a Walt Disney film from my childhood which was shown in schools to encourage vaccination.  It was WWII, so the little vid-game type characters wore helmets.  The vulnerable little red cells were attacked by black spider-like microbes, who were then vanquished by the cells in white helmets.  This was vaccination against bacteria, which are microbes (too tiny to see without a microscope), but not as sub-living as viruses.  Even professionals are very fuzzy about viruses.  A veterinarian recently offered me antibiotics for my cat colony’s eye prob, forgetting that it’s a viral affliction and antibiotics don’t work on viruses because they are SUB-LIVING.  Anti-BIO means against life. 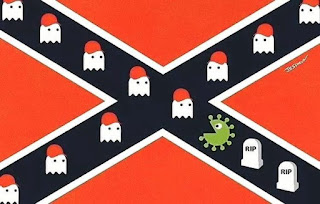 We persist in imagining that diseases are caused by something like insects because the vectors that carry both bacteria and viruses are often in the “blood” stream of insects.  We say “bugs” for diseases, but sometimes the DIS-ease is from genetic glitches (stutters in the physical blueprint) or from environmental damage like bad air or toxic chemicals.  And we assume that ever more potent and exotic substances are the only cure, which are delusions of script-writers and our president, the snake-oil monopoly specialist.  In the meantime we flood our environment with toxics, irritants, and unknowns.

I had a tooth pulled recently and when the young dentist, as he had been taught, asked if I had any questions, I asked him what he did about HIV in his office.  “Oh, we’re very clean!” he said.  “Very scrub everywhere.” HIV is not addressed by scrubbing.  It is about blood exchange.  I had lost a little blood just then.  Luckily, he was wearing latex gloves.  But he clearly hadn’t really registered HIV.  He was in Shelby, one of the state’s Covid-19 hot spots.

Pondera County, where I am, has had 2 cases, both middle-aged women, and both have recovered.  If they infected others, those people were not in this county or are undetected.


Doctors say that when they worked to take clots out of the brain (strokes) new small clots formed as they worked.  This has not happened before.  The victims were young and healthy. This reminded me of a tendency for women who had just delivered babies to have serious strokes.

The other thing is that David Quammen says he knew a scientist who found and sequenced Corvid-19 years ago, earlier than this pandemic, and put out an alarm, but was shut down by politics.

https://bioneers.org/shaking-the-viral-tree-zp0z2004/?utm_campaign=coschedule&utm_source=twitter&utm_medium=bioneers&utm_content=Shaking%20the%20Viral%20Tree:%20An%20Interview%20with%20David%20Quammen%20-%20Bioneers
Posted by Mary Strachan Scriver at 10:03 AM