NAPI AND THE ANGRY BOULDER 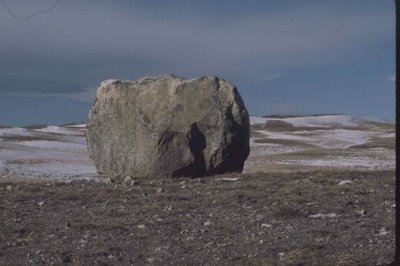 This boulder erratic had been underground until the road out towards Heart Butte was improved. The road builders dug it up and set it over to the side. It is hardly weathered but almost immediately it began to attract small gifts and prayer tokens.

The glaciers scraping across the high prairie left a lot of puzzles behind, like the potholes formed when big chunks of ice carried along in the earth finally melted or the boulders transported down from the cliffs where they originated and stranded far from the mountains. Indians, just like modern scientists, pondered these things and developed theories about them which were often expressed as stories.

Blackfeet who saw the Indiana Jones movie in which a big stone tries to roll over Harrison Ford, must have been reminded of the story of Napi and the Rolling Stone. (Not a member of the rock band but possibly related to Rock Gobert.) It’s a story oddly reminiscent of the Aesop fable in which the sun and the wind bet over who can make a man take off his cloak. The wind tries to tear it off (our winds around here are always trying that) with no success (hooray for our side!) but the sun simply gets warmer and warmer until the man takes off his cloak and lays it aside.

In the story of Napi and the big erratic boulder, Napi is already too warm on a nice sunny day, and looks around for a place to hang up his cloak. He sees a big boulder and in his usual grandiose manner, pretends he is doing it a great favor. “You’ve been out here with no shelter for too long, Grandfather. I give you my cloak as a long deserved cover for your bare stone shoulders. You may keep it forever.”

Then Napi goes on, it starts to rain (if you don’t like the weather, just wait a minute!) , and he wishes he had his cloak back. So he sends a poor innocent passing-by coyote back to get his cloak, promising that if the coyote brings it, he’ll share the cover. (Among other things, Napi is the first “Indian giver.”)

Pretty soon the coyote is back with no cloak and reports that the stubborn rock says that Napi gave him the cloak and he intends to keep it. Napi is enraged and goes back to grab his cloak off that rock. “You’ve been out here in the rain and sun for centuries,” he scolds. “You don’t need any covers.”

But when Napi goes off in his cloak, the rock comes after him, rolling, rolling, rolling... Napi yells for help and some animals try but have no luck. Finally he sees some bull bats (nighthawks) and they are able to dive-bomb the boulder until they’d chipped it to pieces. As a reward, Napi grabs the corners of the birds’ mouths and pulls them out wide, then pinches them off short. That way they look cute. Or at least Napi thought so. Of course, he himself had a big mouth.


One of the interesting aspects of this story is that it addresses the problem of what is alive. Early indigenous thinkers were inclined to think that anything that moved around, had emotions, and did things was alive -- so this boulder was certainly alive.
Posted by Mary Strachan Scriver at 4:01 PM

Interesting concept of moving stones being "alive." There is a dry lake in Death Valley called Racetrack Playa, where you can see stones (some quite large) that show trails behind them in the sediment indicating that they have moved by themselves. It's theorized that when the lake is seasonally wet, the wind pushes the stones along making the tracks.

I wonder what the Shoshone who lived in the area made of that? I don't recall seeing anything in the ethnographic literature about it.