OUR BODIES, OUR DRESS-UPS

Are transvestites making a fashion statement or a political statement?

This is a follow-up to the post on Colette, which prompted my cousin and I to agree that we both love to wear tailored slacks and man-style dress shirts WITH, of course, jewelry but maybe man-style heavy gold chains. We’re trying to track down a copy of the Threads Magazine #121 which had an evidently VERY popular article on the inside construction of a Colette jacket. Clearly, one of the things that makes male clothing attractive is the amount of tailoring and shaping that goes into men’s suits. I used to linger in front of the windows of Mario’s in Portland, where the slacks and jackets had detailing beyond anything in the women’s clothing. They were meant to be sturdy, convenient and classic. Katharine Hepburn, Queen Christiana, Greta Garbo clothing.

I suspect that may be part of the secret to the appeal of Tim’s “leathers,” too. They are often very detailed and ornamented, always with metal, but they were originally meant to be protection, road armor. I suppose that the original metal armor was often beautifully detailed and meant to convey a message of intimidation, identification, and simple prestige. Certainly the breastplates of American Indians were as much decoration as protection.

How much of a political statement can a person make with clothes when everyone wears unisex jeans-and-t-shirt? It’s pretty plain who’s female and who’s not, but status is close to moot. The clothing indicator I stumble over is in the hospital where doctors, nurses, and aides all wear scrubs. What prompts this tendency towards uni-dressing, the “sweats” phenomenon? (Around here the older women try to reclaim their femininity -- or maybe prestige -- by adding decorations to their pastel sweats: embroidery, rhinestones.)

I’m not just thinking about cross-dressing, but about the whole symbol-system by which we form our ideas of our own and other people’s identities, which in our sex-obsessed society is attached to sex more than anything else. This is a culture that encourages our early teen and sub-teen girls to dress like prostitutes and constantly drags rape into the conversation, while pretending that every male -- no matter how much a child or a non-fighter -- can fend for himself.

By now I hope we all know that gender/sex in the European context is defined in the Manichean way as a polarity, two mutually exclusive categories attributing more power to the male side. Anything that doesn’t conform to that, either in clothing, in sexual desire for others or in sexual appeal TO others, is ruled deviant, perverted, OUT. People who find that not only untrue but also unjust are attracted to other cultures, esp. the NA cultures that missionaries tried so hard to stamp out. This means there’s been a certain amount of reverse assimilation (wannabes), but it’s been muddled and helter-skelter, This book of essays I’m reading, “Two-Spirit People,” (ed. Jacobs, Thomas and Lang. U of Illinois Press @1997) tries to find some order.

In terms of Native American tribes, the two gender categories exist but on the coast most of the tribes defined them in terms of occupation: what you do all day (cook? hunt?); and on the Plains most of the tribes defined them in terms of spiritual calling -- a mystical and personal experience that lifts a person above gender. When I was an animal control officer wearing a deputy sheriff’s uniform and badge (my occupation), I startled women who came upon me in the ladies’ room. But when I was in the ministry (attracted to the things that male ministers do, esp. the preaching, which I interpreted as a spiritual calling that rose above gender and so on), many ministers both male and female were covertly dedicated to proving their sexuality one way or another, straight or gay acting out. It was scary for them not to be either/or. I rather liked ignoring either/or.

It’s interesting that Two-Spirit people are always Native American. There cannot be black or white or yellow Two-Spirits: perhaps the true doubleness is that they are BOTH gay/lesbian AND NA. In fact, they had a struggle in SF with AIM to be GAI, according to these essays. (Translation: American Indian Movement and Gay American Indian, both formal organizations.)

Now there seems to be a progression back towards a more continuous, multi-valent, morphing understanding of sex/gender. The gay men led the way, not least the contingent who insisted on hypermasculinity rather than “lavender” sissy-style roles. Then the lesbians demanded equity -- sauce for the gander means sauce for the goose. Cross-dressers were in there somewhere and now we seem to have reached a point where people can remodel their bodies as though it were clothing. We have also reached a point in environmental pollution when more and more babies are born with ambiguous sexuality -- both or neither sets of organs, requiring medical and social decisions based on their genome. What do you do with a baby that looks normal but tests XYY or XXY?

Most baffling of all we have finally heard some people saying they are not the gender they appear to be: women who insist they are psychologically men and the other way around, entirely without any chemical or physical indicators. They just FEEL that way. Intensely.

In theory we are supposed to be a culture that values individuality and uniqueness almost to an extreme, but then when someone truly unique (Michael Jackson?) turns up, we can’t help thinking of freaks. Evidently it was pretty hard on him, too. Is “child” a gender? That’s the way it seemed to be for Jackson. Little Boy Blue, Little Toy Soldier, The Little Prince, beloved of other children. We still can’t help thinking “pedophile” and shuddering.

Yet who among us has not in childhood played doctor? Even with dolls or pets? Puppenphilia? But that only picks up the dimension of desire and curiosity on the part of the child -- and says nothing of being a bored baby beauty queen, rouged and desired, quite apart from what she might want, which might be playing in the mud. Or maybe we’re talking about a boy who would like to try on an evening gown and high heels if his father wouldn’t hit him for it. They could end up with extinguished sexuality. 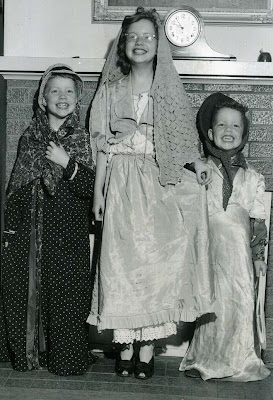 When I was little we had a big box -- maybe four feet cubed -- full of discarded clothes we called “dress ups.” For a long time we dressed up innocently. I think it had nothing to with identity and everything to do with theatre. At what point did it stop being innocent? Or did we just lose interest? Or was there a “why not” after all?

After all, we were smooth-bodied, no bosoms, no bottoms, no body hair. Our desires were for food and safety. How much of our cultural preoccupation with sex comes from not having enough nurturing and protection as children and hoping to attract them even in adulthood? How much of our preoccupation or lack of same when it comes to clothes is a throwback to the days when other people dressed us instead of ourselves?
Posted by Mary Strachan Scriver at 10:25 AM

Humans are both biological and social beings. Biology is perhaps -note I say "perhaps"- more fundamental, but with humans, the social aspect is almost as fundamental.

Sexuality has both social and biological aspects for humans. In fact, with our increasing dependence on technology and social behavior for our biological existence, again, the two almost become merged. The Native America stories recognized we were weaker than the animals and could not survive without extra help, unlike them, our more able brethren.

So we have evolved to become socio-biological beings. The trouble comes when cultures try to separate the two. In traditional societies, they have time and lower populations, so they work their own more integrated adaptations out, which work for them. In a hyperdiversified and immense population, it becomes ever more confusing and ripe for social conflict.

Since we evolved from organisms that recombined DNA through sexuality, we cannot escape our biological roots, although some might like to try, and I am sure some scientists somewhere are trying probing the boundaries to give us the options of being hermaphroditic worms through test tubes.

But biology does not equal social functions though they are entwined. And sociality is constantly negotiated, unlike biology. Such functions as clothing, raising the next generation, language/communication, roles, belief (expression of spirituality) are more social functions than biological ones (I am becoming more and more tired of people's overuse of the word "spirituality" and their less than "spiritual" agendas).

So that's the thing. Biology is a fact-- although the weird stuff going on with our genders and fertility has more to do with dysfunction through environmental pollution (chemical, radiation, etc.) and stress than adaptation and evolution.

Social roles are negotiated to support biological existence and perpetuation-- which means you don't always know what works until you try it (as either an individual or as a society)...but then of course, it's too late to "untry" it.