Here’s a second run at the problem of a query for “The Bone Chalice.”  A friend did a bit of research and discovered that you can buy a genuine imitation skull chalice at:   http://skullsdirect.deviantart.com/art/Ritual-Skull-Chalice-199101546  or actually http://www.skullsdirect.co.uk   It’s a little hard to decide how to feel about it.  Metaphors have a startling way of escaping into actuality. 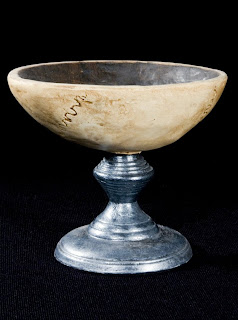 Art is the expression of the relationship between a human being and the universe.

Holiness is the direct perception of the universe.

Worship, liturgy, ritual, ceremony are arts of perceiving the universe as directly as possible.

Play is the exploration of human experience.

Religion and dogma are institutionalized versions of information gathered through playful exploration of human experience that has been codified and systematized.
The criteria for systematic organizing into religion is beliefs that promote survival.

Morality is the systematic organizing of the trade-off between individual survival and group survival.  It is often explored through theatre, which is a kind of play mixed with ceremony.

A human being is a creature that interacts with the universe (though a part of it) through the use of molecular/cell interactions felt as sensations, which are processed into patterns that guide the creature through the practical doing of ordinary life:  gathering and preparation of food, creation of shelter, interaction with other human beings and animals and so on.  In previous millennia humans tended to stay located in the culture/religion they knew and to which they had become adjusted by attrition (aka evolution).  In the past two centuries a body of reflection and exploration has made it possible to analyze and experiment more than ever before.  It has also raised questions about identity, what it is and how to manage it.

This manuscript reflects on the organization and practice of liturgy in its attempt to directly perceive the Holy Universe.  This view is closer to play than morality. closer to art than dogma or institution, closer to theatre than therapy.  But it is based on more than introspective philosophizing -- energized by the recent research on human brain neurology.

It has always been an aesthetic principle that any creation has a beginning, a middle and an end.  Add to that the neurological theories that sensory information is taken in (in far more ways than the five obvious senses), processed at the point of intake by a neuronal structure (forming what we hear or see) so that can be sent coded to the brain, sorted at other evolved organs from the brain stem “upward” to the stacked and wrapped parts of the brain and their specialized cells, until it can be translated into actions, maybe as small as blood pressure and maybe as decisive as violent muscle use.  These systems include the “nervous system,” the autonomic nervous system, the network of nerves that sleeve the intestines, and a number of organs that release chemical messengers (hormones and enzymes) directly into the lymph and blood of the body.    Add to that the waves and rhythms of the brain, the heart, and those functions attuned to day length, season, and internal cycles -- the forces of fertility, sleep, and habit.  All this is far too complex and subtle for any human unaided by technology.  Unless it can be bundled into story, metaphor, art.

Liturgy in the contemporary world is a function of culture and mostly administered by institutions as a way of confirming their authority, but it also escapes.  Religious clashes, particularly now that so many old boundaries are breached, are a source of war and famine across the planet as people try to secure resources for survival (self-defined).  Most efforts at bringing peace depend upon written documents, technological force, and truth claims that were developed long ago.  Institutional religion is very much enmeshed with the invention of writing:  the Book.  Many liturgies also depend upon written material: the prayer book, the hymnal, theological works and academia related to them.

“The Bone Chalice” is based on the poetic metaphor of the human skull as a vessel to contain thought in the way the Christian goblet contains wine/blood.  It is meant to discuss the art of creating liturgy quite apart from institutions but not contradicting them; rather, finding the underlying contact with holiness.  This is not about going to primitive cultures, except as examples, nor is it about ecstatic drugs, but rather what they do and perhaps why.  This is not about content, but how content is derived.  How grapes become wine, if you like, and why wine suggests blood suggests Jesus suggests sacrifice suggests the death of an individual for the sake of the whole, not neglecting the background of animal  or even human sacrifice on the altars of the same peoples.  (Are we returning to that -- in the same place?  With rubble instead of monolithic altars?)

This work is in two parts.  The first half is meant to review the theories of how our sensory interface with existence seem to operate.  The second half looks at specific instances of liturgy: traditional, creative,  and accidental. Where did they come from?  What do they mean?  Once they are established, they add another layer of meaning.  Partly this comes from the individual memories of actual acts. (Methodist Communion with the clinking little glasses of grape juice on the silver containers which are passed along the pews.  The embarrassment of the little Catholic kid who finds that the wafer has stuck to the roof of his mouth.  The germophobe’s worry of sipping from a communal chalice.  The judgment and skill needed to tear off appropriate chunks of tough artisanal peasant bread, thought to be authentic.)

Or how about the possible heresies?  The seminary female forbidden by her tradition to serve bread and wine so serving bread and water instead.  The mockery of a soda/Twinkie communion.  The tribesman who doesn’t know bread or the meaning of unleavened bread but understands that a communion wafer has high significance, and therefore takes some home to stick to the belly of his ailing child.

Posted by Mary Strachan Scriver at 4:26 AM