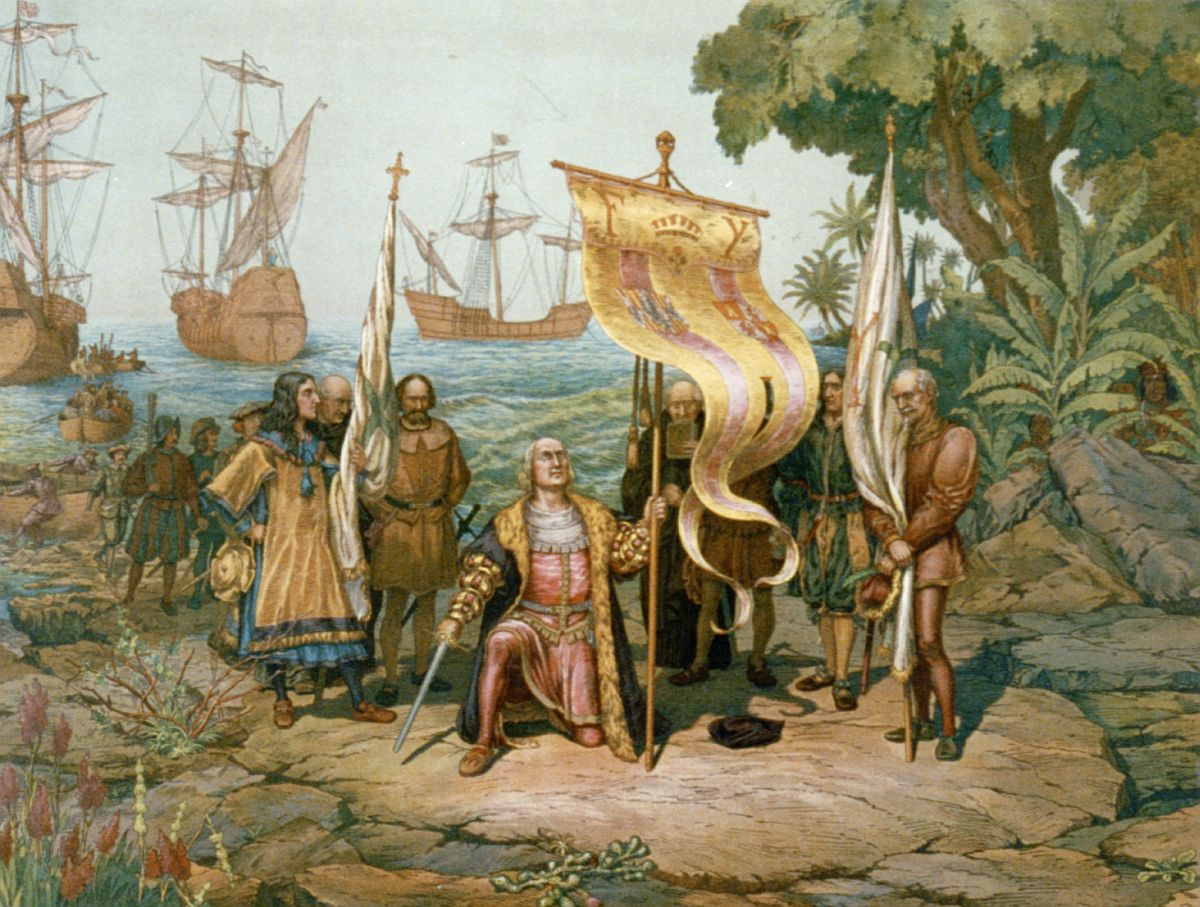 Maybe it was the great sailing ships that established that there were other worlds where the people were so different that they were like different species and the sailors were surprised that they could start pregnancies -- if they realized that they had.   They brought back monkeys and macaws and what they thought were unicorn horns, not that narwhal tusks are any less amazing. The Church was always eager for the drama of conversion, so they encouraged the idea of new territory.  People = souls.  The Pope had his cabinet of curiosities, the same as any nobleman. 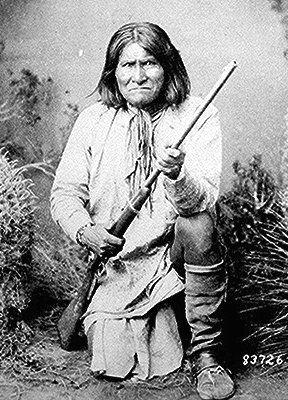 But it was the 19th century, the scientific people and the wealthy -- who needed something to spend money on besides war -- who really fueled the commodification of culture.  They loved lists and categories, inventories of what they had or wanted to have.  Then came anthropology, studying cultures in an attempt to capture what they were all about.  It was so much fun to sit around a campfire with strange people not wearing any clothes.  And the women were amazed at the stories.  Too bad they were so attracted that they actually went into the field.  After all, the men might have thought, nothing can beat a feathered penis sheath for a cultural artifact, but would Margaret Mead think so?  (I’m thinking she would.)

America, the continent rather than the nation, was a bonanza of indigenous cultures because it was so big that each region had its own terms of survival.  It wasn’t until industrialization expanded military control (railroads) and profit development (dams and mines) that the “tribes” -- a phenomenon of who was there and traveling together -- became defined as sort of semi-nations and signed treaties that were never observed, only paper, sometimes not signed by the USA. 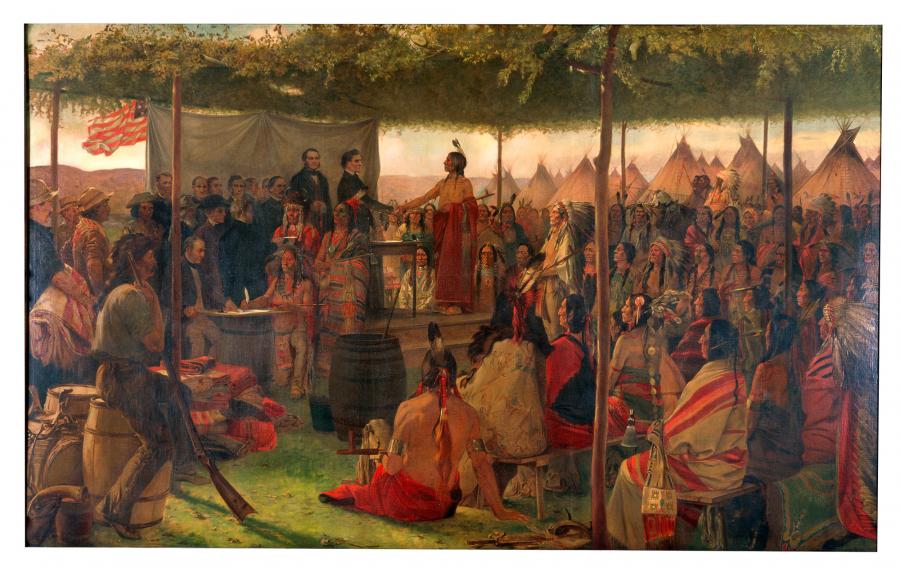 Treaty of the Traverse des Sioux by Francis Davis Millet

Indians were thought to be disappearing anyway, falling under the relentlessly inevitable wheels of time.  This encouraged even more the idea that they were commodities who could be “owned” through their material culture (collected by museums -- only to preserve them, of course, while the People drooped over their horses, confounded by the Pacific Ocean.)  One powerful way of transforming people’s lives into profit was the Rumpelstilskin method of making them into books.

Since the tribes were oral cultures, with some use of forms of writing to keep tallies, they didn’t write things down -- they just told each other.  The white men who came then listened and wrote out the books.  At a time when even white people weren’t necessarily literate, the books did sell and everyone felt they were valuable.  It took a while before the tribal people realized that THEY could write books.  By that time they weren’t very tribal anymore.

The gluteal crevice was between being literate or knowing the stories.  The issue became political.  Money always does.  They call it “intellectual property” which means that if you want a picture of Mickey Mouse on your hat, you have to pay the Disney corporation.  (Disney is dead.  Anyway, he wasn’t a mouse.)  This is a fantasy.  But many people guide their lives by fantasy and I’m not even talking about religion.

One fantasy is that “Indians” are anything but individual people in communities and categories that overlap and separate in a dynamic changing world.  Darrell Kipp used to call it “the hydraulics of the prairies.”  The movie-driven Pan-Indian illusion that all Indians had horses and wore feathers, is invented.  How does one “steal” an invented culture?  From whom?  Sherman Alexie, for instance, comes from a tribe that survived on salmon and a very good way to eat that was!  I grew up eating Columbia River salmon bought from Indians.  They were not invented, but that didn’t save their fish ladders when Celilo Falls was flooded. 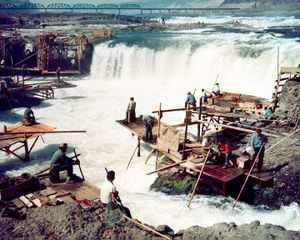 When some of the Indians finally got hold of college degrees, which is what publishers think enables Indians to write, there was a Renaissance of American Indian Literature.  Immediately the internecine wars began over who was “more” or “less” Indian than the next guy, because everyone fancied they would make money, including the publishers.

The legal definition of “blood” was not biological.  It was provenance, hereditary descent from the people who originally lined up to be recorded for the issuing of commodities.  It was whoever was THERE.  Indians are the people who were THERE.  Blood had nothing to do with it, except that you and your relations might not survive if you weren’t there for handouts.  As I write, this is happening in Tibet.  Take names, make lists.  More like a cop than a soldier.  This is how you make order out of chaos.  This is something that a writing and therefore bureaucratic culture does -- not an oral culture.   And the fact that it is legal does not make it just. 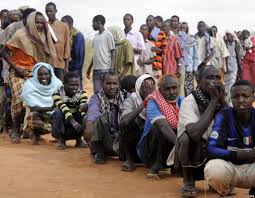 So the white men were making money from writing about this directly, and also making money from interviewing “scientifically” the informants they found.  (“Informants” were the ones who wanted to get into that barrel of candy that Mrs. Uhlenbeck, the linguist’s wife, kept around for bribes.)  Since informants were the primary access to information, there was nothing to check them against for accuracy, unless you count the Hudson’s Bay factors reports sent back to headquarters in England.  Those records are accessible, but they are the reports of white men interested in profit.

Missionaries were trying to convert an oral culture into a written culture (Christian) by translating the languages, which was considered a feat nearly magical and certainly deserving of praise.  But written Blackfeet was not of much use.  Maybe for the English speaker -- if he knew Blackfeet. Not for the Blackfoot speaker who was considered simply a natural phenomenon, not a person with intellectual rights.

Much of the descriptions of early prairie life are still in French or Italian or German, because those were the nationalities of the missionaries. They recorded everything.  (And also acquired objects to be gifts.) Blackfeet who want to write accounts of the earliest days, would do well to learn French or Latin.  When a priest or anthropologist wanted to write about a true secret, they wrote it in Latin.  Few of today’s militant French defenders of the Blackfeet culture have bothered to translate what must be file-after-file of mission letters sent to Rome.  They prefer the collective dream of the 19th century version. 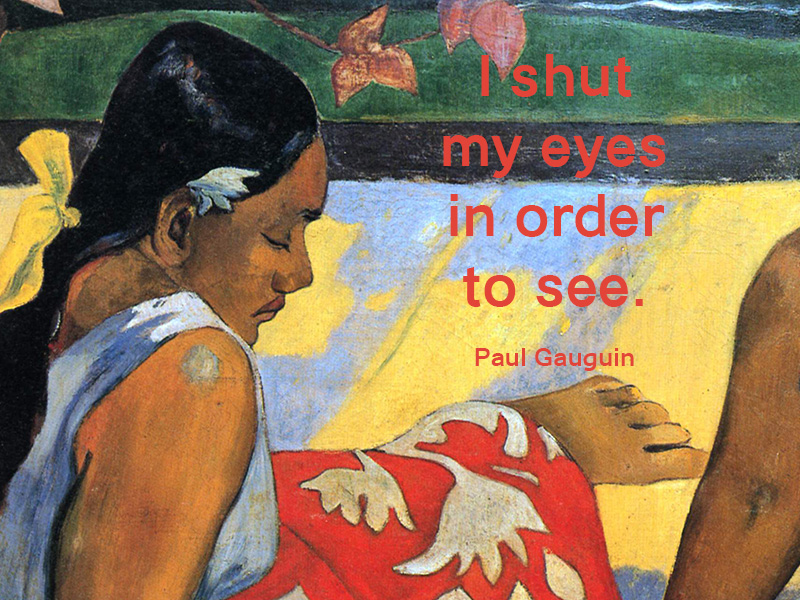 Folks who don’t fit their own culture sometimes develop the fantasy of going to a South Sea island and living by being creative.  We might call it Gauguin Syndrome.  Bob used to say that one of the advantages of being a white man on a rez is that the old-timey Indians figured all white men were crazy anyway, so as a kindness they were tolerant.  But their children and grandchildren grew impatient about all this anthro stuff.  They didn’t really understand why anyone would fuss about a lot of old stuff.  Just hand over the candy.  They have a South Sea Island in their pocket: iPod.

Everyone loves the fabulous, fandom expands everywhere, so they used these to accrue value for themselves.  By association they took on the romantic nature of Indians:  which Indians had become their true families, what secret ceremonies they had been able to slip into, who got drunk with them . . .  frat boy stuff.  While they were congratulating themselves on their success at being boy scouts, tribal women quietly interviewed their grandmothers, wrote it all down, learned how to tan and bead -- even quill -- and where to find certain plants.  One day, all of a sudden, they were handed Ph.D’s.

It was bad for frat boys, but very good for the redemption of the old ways.  Kind of mixed about books, since the women were too busy to write most of the time.  Like Adolf Hungry Wolf (hated by frat boys), the women weren’t talking about it -- they were doing it.  The male Indian students who used to drink and smoke weed with the white faculty, the frat boy fans, were replaced by low-status low-quantum urban Indian women willing to sleep with a prof for a grade or an Indian for the thrill. Commerce trumps everything else for some people.  Except sex. 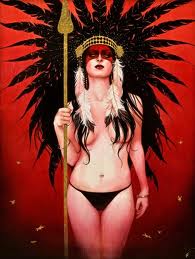 (I dunno.  This looks kinda African.)