INTELLECTUALS, THE MIDDLE CLASS, AND ALL THAT JAZZ 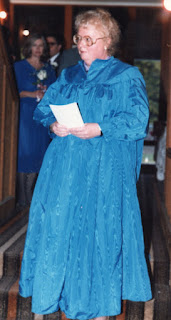 Enrobed for the wedding of the Rev. Annie Foerster

An entanglement of terms keeps making trouble for me with friends, relatives, and readers.  One term is “middle class” and the other is “intellectual.”  So trying to think about “middle class intellectuals” is pretty problematic.  Googling brought up all sorts of additional entanglements.  Here are samples of what I found (without links, but easily found).

“An intellectual is a person who engages in critical thinking, research, and reflection about society and proposes solutions for its normative problems. Some gain authority as public intellectuals.  Coming from the world of culture, either as a creator or as a mediator, the intellectual participates in politics either to defend a concrete proposition or to denounce an injustice, usually by rejecting, producing or extending an ideology, and by defending a system of values.”

The above is a pretty good description of what I thought I signed on for by joining the “learned ministry” of the UUA.  I’m not sure our present society — which is mirrored by the sociological bourgeois of our society we talk about without defining —will allow such a class.  They seem reluctant to define politicians that way.

HISTORY:  “The contemporary intellectual class originated from the intelligentsiya of Tsarist Russia ( c. 1860s–1870s), the social stratum of those possessing intellectual formation (schooling, education, Enlightenment), and who were Russian society's counterpart to the German Bildungsbürgertum and to the French bourgeoisie.”

These two passages are roughly descriptive of most UU parishioners.

Two categories are missing in other denominations of comparable status: medicine/science, mathematics.  STEM.  But including these folks (religious skeptics) is often schismatic.  That’s not my problem.  My problem is resentment of intellectuals within the middle class, which CAN be activated without involving any religion.  But the resentment is often mixed with hierarchically endorsed respect and high expectations, esp. scientists, including doctors.

I was not exempt from that confusion and still wrestle with it.  I have a special affinity with others who try to figure it out.  This equation or dynamic or whatever it is has grown far more complex now that so many “intellectuals” operate on the terms of the French philosophers who deconstruct the world.  It’s a renewal and very useful, but still a blunt instrument.

A related complication is the redrawing of one of the boundaries of the middle class, that of propriety/
respectability.  It just happens that ignoring those restrictions have been claimed as an entitlement of intellectuals, parallel to the entitlements of the very wealthy to ignore moral limits.  Highest classes and lowest classes share that.  I'm talking about sex, crime, drugs.

Another is the idea that intellectuals should be entitled to a special place, like an academic campus, an ivory tower, someplace where the rest of us can’t go, a place of particular protection, a sanctuary.  That’s about gone now.  The corporations, in the name of research, have captured the academic world by paying the bills.  There are other groups more deserving of sanctuary.

In a society that is not wealthy enough to support people who just think, without making something, there is always suspicion, so intellectuals — what they call “public intellectuals” -- produce products like books, lectures, students.  They are in danger of becoming shopkeepers, pulling merch out of their own guts.

But the other danger is that suppressed people will take the boundaryless thinking of intellectuals as an indictment of the status quo that justifies violence and rebellion.  Like US declarations of war on obscure countries, new ideas need to be thoroughly thought through.  Just being Post-Colonial is not enough.  What does it mean, besides justifying resentment?  After the deconstruction should come construction according to a new plan, not just a retreat to the same-old/same-old.  The renegades’ real yearning is to become bourgeois.  (Watch the rez.)

Because of the commodification of education, it has become expensive to educate an intellectual.  Because of the decline in basic public education, fewer people are equipped to pursue the education of an intellectual.  A lawyer near the U of Chicago campus used to offer a course in how to understand the highly rational and precedence-based systems of what white men think is what an intellectual knows.  It took me months to figure it out and some of my classmates never did.  Enough of them finally demanded exemption that the traditional foreign language and the internal U of C Masters’ Degree were dropped.  The UU minister is no longer accurately termed “learned.”  I’m not sure it matters.  Starr King grads don’t worry about it.

But I have probs closer to home.  My mother, for instance, back in the Fifties was willing to accept me going off to college in Chicago (the other side of town from U of C) because a teacher endorsed me and I had a scholarship.  I was going to be earning an education degree.  I did, technically,  But I didn’t.  I slipped over to theatre and religion, intellectual categories that have become contemptuous of intellectuals.

I always had an eye on the U of Chicago.  When I went back there to seminary, she was very angry.  To her it meant I thought I was better than her, better than the family, better than our life.  Leaving.  Oddly, it was my ex-husband who supported me.  Not because he was intellectual, but because he loved Chicago.

He was an “embodiment thinker” before there was such a thing.  His intellectualism was jazz.  It has taken me a long time to find this idea and it means a transformation to both the ideas of being “intellectual” and being “middle class.”  I’ve got to give up trying to get people to understand.  Maybe I’m getting close the end of blogging.

Posted by Mary Strachan Scriver at 5:08 AM