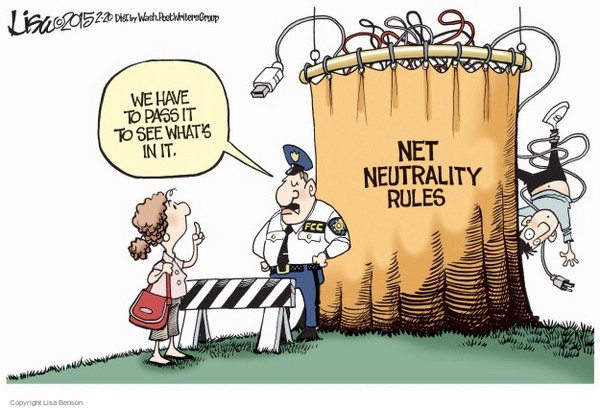 Two issues I don’t hardly know how to tackle.  One is this preoccupation with sexual harassment and the other is the loss of internet neutrality.  I think the only way to approach them is through method:  on the one hand the method might be an awareness of the continuum of harassments from distant catcalls on the street to the evidently inconceivable (no one connects this) intensity of throwing acid, murdering, capturing and mutilating.  The core of the discussion seems to be high profile men accused by aging white glamour girls of offences, the high end of which is rape and the low end of which is goofing around.  (I’ll get killed for saying that.)  It’s a trope, a gropetrope.

So I’ll go to the method of my old animal control boss, which is to define a continuum and then figure out what will make social behavior move towards the desired end.  Figuring out what that desired goal might be is likely to be the hard part.  We do not want the same ends.  Some just want to be left alone and others want hookup culture that's under control.  Control is the key -- both genders want it.

Context dictates which end should be kept in mind.  Boundaries abound.  But nice ladies who are upset that a geriatric president would pat their bottoms are not at all the same thing as kids impounded like dogs at the southern border of the country — with the difference from dogs being that the kids are fucked and beaten by guards.  The difference from nice ladies?  I’ll try to figure it out.  It has something to do with ownership.  Owning leads to trafficking.

The other big issue that I can’t really address very effectively is that of internet neutrality.  I’ve been a long-form blogger for a very long time.  I grew suspicious of Facebook early on and have been confirmed on most suspicions, while adding more.  I just think they run a dirty business.  This means the others probably are working from that book, though they might not be such Godzillas.  I’ve pulled way back from email contacts and automated newsletters.  I’m on Twitter, but wary of what I read.

Regularly I check Google Images to see what they are attributing to me, and it is insane.  I have no connection to most of the images.  Suddenly old attachments sent with private emails long ago will appear.  I used to put many images in my blog posts — now, unless there’s a point to be made — I don’t.  One for a header — that’s it.

Many times I google to pin down the parameters of some major grand philosophical concept that I sort of skimmed in seminary, and it turns out to be a rock band.  That’s not Google’s fault exactly, except that the rock bands pay to be high on the list and that means I either have to scroll deeper or figure out some way to ask for what I want that doesn’t trigger the paid entries.  It’s redundant to complain that money has become everything.

It occurs to me that the internet/government/corporation mesh has developed a split something like Snow’s famous science vs. arts split that preoccupied us all for a while back in the Fifties, and is still useful.  This is also related to the idea of Kuhn that our whole framework of meaning is effective until the evidence and the reality of experience begin to move away from it.  The distressing malfunction eventually means a new framework will form, in spite of efforts to preserve the old one.

I’m going to get into trouble for saying this (which I why I don’t write for Medium where everything is monitored — they call it “curated”), but we’ve split into two cultures, one of which is Asian in origin, and based on survival through wealth, regardless of the loss of freedom, managed by authoritarian means.  Or devious strategy.  I put Russia in Asia.  It’s more culture and environment than genetics.  The tougher the place, the easier to get control by dominating necessities of life en masse.

The other half of this binary is the European-based (going back to the Greeks and influenced by the French) notion of ideals — principles of the Enlightenment and Rules of Law that protect the individual, raising up ideals of heroic behavior in which deservingness gets confused with meritocracy, which then means that the meritocracy begins to think that the others don’t deserve consideration.

At their worst they both suck.  And neither really understands what the Internet is or can be or even that it will be replaced by something even more effective.  I keep seeing ads asking for investment in something forecast to be staggeringly beyond the effectiveness of the Internet.  All while some people are still trying to manage their cable TV package.  I have no idea how to imagine something beyond the Internet.  I've never spoken on a smart phone.

The article prompts me to realize that the invention of hand-held computers -- that used to occupy entire rooms -- is probably as much of a change-maker as the original invention of console desktop machines.  Free-ranging handhelds power a million CSI plots, everyone in voice range of everyone no matter where they are can create a hive mind.  Sub-networks, local networks, special interest networks — where are the programs?  Probably already sprouting.  We’ve got the gizmos, we’ve got the apps, we need to think about the transmission lines, even though they aren’t wires.  And CSI reminds us it is all recorded.

What ties the corporation to the internet is advertising, buyer research, and fast, covert in-house messaging, though hacking affects all of them.

What ties the corporation to the government is the level of financing and organization that puts communication satellites in the sky and runs optical fiber through towns.

This article linked below argues against centralized Internet.  (He has a Chinese name Richard Chen and writes on Medium, which pretends not to centralize by keeping people in boxes.  Medium drove me nuts with their insistence on popularity and rigid business-document understanding of what options work for writers.  I left.  But this article crosses my prejudices.  History is the bridge.)

Chen cites 4 dangers identified by the MIT Media Lab in terms of a centralized system:  top-down direct censorship, curatorial bias, abuse of curatorial power, and exclusion.  The first and fourth are pretty obvious and demonstrated in various nations who black-out what they don’t like.

Here’s a vital paragraph about curatorial bias:  “Google and Facebook rely on advertisers for revenue.  Their business models create an “attention economy,” in which maximizing user engagement incentivizes the platforms to favor virality over veracity.”  It’s the old “made-you-look” game.  Click bait supports paywalls.  Medium does it: read the first paragraphs free, then get the rest AFTER you pay.  PBS does it:  you need an internal additional fee “passport” to get the special shows.  Advertising is gaming and that’s politics.  And that’s money.

Among the many long-game sneaky rules is the 1979 Supreme Court case Smith v. Maryland which rules that any data or other material that passes through the hands of a third party is no longer protected by privacy laws.  That means everything on the cloud belongs to the owners of the giant turbines that must be built along waterways in order to cool their cores, just like nuclear generators.

Read the article to get Chen’s description of IPFS and HTTP.  It just means everything can be hacked and worked-around.

So we move farther and farther from each person’s labor and creativity belonging to them, closer and closer to third-party hostage takers.  None of the commentators I’ve read so far has talked about block-listing or black-listing, the practise of providers to sub-contract the blanking out of email messages that don’t meet certain criteria.  It has been used for extortion, but to do that it needs to let you know it’s happening to you.  Usually it’s imperceptible until your grandma wants to know why you never answer her emails.  You have to use the email to find out what’s happening.  Providers are not helpful.  They shrug.

Algorithms are another related dilemma.  Even the Big Kids are beginning to say that they feel they have lost control.  It's the sorcerer's apprentice all over again.  Watch and learn, Zuckerberg.
https://www.youtube.com/watch?v=Rrm8usaH0sM

Posted by Mary Strachan Scriver at 12:23 AM