WHEN YOU MEET "OUT THERE" AND DISCOVER IT IS "IN HERE"

Chuck Palahniuk became famous for two reasons:  the first is his book about "Fight Club" which became a movie, which certified him as a writer even though a film is not much like a book; the second is his success at workshops promising to be way outside the norm, dangerous and surprising.  This is a classic way for a writer to find an income based on all the wannabes out there, an evidently endless supply, and also the link between movies and books, which is the assumption that the road to success in any media is violence, insults, macho self-destruction.

The following quote is from an article in Oregon Live.  The success of any "book" that is paper pages within a protective cover is based on the froth about it produced on pop media: newspapers, interviews, speaking on panels.  Like this:

“The first rule of Fight Club is: You do not talk about Fight Club.” And the second rule? Come on, everybody, say it with us: “You do not talk about fight club.” Palahniuk’s novel of ennui-driven violence is a cultural touchstone for Generation X, and Palahniuk himself has sort-of become a leading voice for the disaffected Everyman. “Writing in an ironic deadpan and including something to offend everyone,” Publishers Weekly wrote in its 1996 review of “Fight Club,” “Palahniuk is a risky writer who takes chances galore ... [and his] utterly original creation will make even the most jaded reader sit up and take notice.”

In the end it wasn't THAT original, but his influence persists.  In fact, this particular article is surprising because it shows other "Oregon" writers who have persisted, even though we've half-forgotten some of them and most of them are not pure Oregonian.  Joaquin Miller, for instance, the poet of the Sierras, an early model of poetry and edge, long before Burroughs et al.

It's ironic that the "Montana writers" who often overlap with "Oregon writers" are much "nicer" and direct their violence at the entirely Other, while the Oregon writers are fierce and after their own.  In fact, I've never liked Jean Auel, though I like her subject, because one day at the bookstore in John's Landing shopping center, she ran a handtruck of her books over my foot.  She didn't target me -- she was just in a hurry.  Heedless, reckless, limitless, that's what Oregon writers are after.  No apologies.  But their horizons are obscured by trees, except on the coast.

But it wasn't Palaniuk who founded "Dangerous writing."  It was Tom Spanbauer who come up with the idea and has done teaching workshops about it ever since.  Ironically, he says the first thing for a teacher is to create a safe place for the writers.  http://www.tomspanbauer.com/dangerous-writing/  Palaniuk, who made a lot of money with his work, now claims that he was cleaned out by thieves, some of them purporting to be safe money managing friends.  Now THAT'S dangerous!

There was a writer I knew who wrote a book I didn't know.  (I'll buy it when I have money.)   Walt Curtis was born on the 4th of July when I was two years old.  He really was in Portland, and he was thoroughly Sixties in the Burroughs way.  His was the Portland I never knew about when I was there, but I recognize the places: the Lone Fir Cemetary, Sheridan's fruit stand.  I did know about William Stafford and his son, Kim, who teaches writing at Lewis and Clark College, very high-brow.  I didn't know that William Stafford was onstage with Allen Ginsberg.  It was the time of political protest and a demand for change.

Here's a taste of Walt:  ”Hell hath no fury like the dream spurned / I saw a waterfall of death and purity / Which will cleanse life of its dirt / We will bathe there naked and free in the morning light of a new dawn.” I am a poetic ecologist. I am concerned with climate catastrophe and saving planet Earth. I am dubious that there is a future."  He was talking about Oneonta Gorge, where my family hiked.

Curtis' "key" was a book called "Mala Noche: and Other 'Illegal' Adventures" written about immigrants, which would be even more dangerous today.  It was a chapbook in 1977 and later became a film by Gus van Sant.  "It is a vividly homoerotic account of Curtis's passionate and mostly unrequited love for several Mexican street youths who come to Oregon seeking jobs and money.  The powerful imagery is reminiscent of Jean Genet and of other Beat Generation writers.  There is great sadness in the lives of these lost young men but also great beauty and dignity."  Howard E. Miller in the Library Journal.

Strangely, this has become a genre of tales with special appeal for young people rather alienated from their peers and looking for a key to meaning.  It includes a deep love of wild nature.

Here is the hour-long "Salmon Poet" by Walt Curtis.  https://www.youtube.com/watch?v=H6Wh1B-F-OU  It's a little dorky, but meant to be fun anyway.  If you get as much of a kick as Curtis and others got making it, you win.  The vid is made in the fall which his why there are so many salmon come up to spawn in the streams, a little ragged towards the end of their lives.  In wilder places there are bears to recycle them, carry their digested remains up into the forests to feed the trees.  Curtis says he's not trying to be a white Indian or shaman, but that doesn't mean he leaves the salmon tribes out. 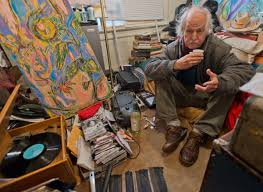 I'm so pleased that Curtis is focused on the immanent, the fleshly, the organic existence of senses.  Mystical woo-woo is evanescent, mental foo-foo for Ph.D. candidates who don't want to have to read all those books.  I remember vividly sitting in that old bomber plane when I was a child.  I can close my eyes and see that instrument panel.  It had a nose then.  War is not just about Vietnam or the sand countries.

I'm glad I left.  I'm glad Walt Curtis is still there.  We're both old now, but, oh, where we've been!
Posted by Mary Strachan Scriver at 1:48 PM