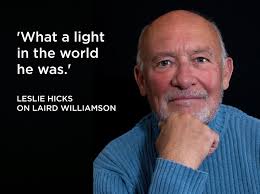 Laird Williamson gave me my first kisses.  Not on a date but because we were in the same acting class at Northwestern and I needed a partner to do a classroom scene taken from "Summer and Smoke", the Tennessee Williams play about John, a completely physical and practical doctor's son, and Alma, which means "soul".  The play, besides being an archetypal American classic that I read in high school (to my prissy creative writing teacher's surprise) is an exploration of loving in a way that makes conventional intimacy impossible while the love remains intense.  Our lives went very different ways, but every Christmas I got a beautifully designed card with a spiritual message, because he was more Alma than John.  This Christmas there was no card.

Eagles Mere was a summer repertory company in Pennsylvania and again we were both included.  The place and time deserve a novel but those who were there find it too intense to describe.  I was the costumer.  Laird was actor and director.  The company was under the direction of Alvina Krause, who took special care of Laird, working with him in her office (a converted upstairs classroom in Annie May Swift Hall).  Some people didn't know it was happening because it was completely private. as much as psychotherapy, because that's partly what it was. AK's specialty was Greek drama, one of Freud's interests because the stories center on deep dilemmas, but the work was not done lying on a couch.  The actor was in movement, becoming the character.

When Laird became remarkable at Ashland, both acting and directing, I went down to visit, staying in my van parked in his yard.  He got me free tickets and we spent a bit of time together, but Ashland is a special sort of place for the repertory company, a special community of highly educated and prosperous people who provided the context and resources for high privilege.  I was not part of it but Laird was at the heart.  I loved seeing that, knowing that his life was so fulfilled.

Later, not quite retired but living in Yachats, I went to visit again and this time stayed in the house he had just bought with friends.  It had the most remarkable river stone fireplace painted bright blue by some previous owner.  We walked on the beach, visited a lighthouse, ate at a wonderful place where Laird was a regular, and talked.  I was envious of the house and kept having ideas about things like sand-blasting that fireplace, but it made Laird indignant for me to do that.  It was HIS house and he was not slow to tell me.  But he treated women like sisters and that meant he was resistant more than angry.

We didn't drink wine or beer, we didn't get high, we didn't act sexy.  Ours was training that AK taught us in an almost Edwardian Methodist way, since that was her spine.  Our bodies were not so much temples as instruments and needed protection to keep them at the highest level of skill.  It was almost Buddhist in terms of discipline, asceticism, centered ability to risk.  Not everyone stuck to that, but we did.

Laird was a far better scholar and historian than I ever was and that was part of his theatre practice.  But I knew him best at Eagles Mere where he designed and produced our silk-screened posterboard window signs for the plays.  I kept a set of that summer's remarkable images.  One of his Christmas messages has been on the wall of my kitchen ever since I moved to Valier twenty years ago.  He's never been here.

In fact, he had a devotion to the idea of "Indians" that was awkward for me, politically incorrect among "Indians".  I mean, he had a sense that the Yachats house would be the end of the trail, so he and his cohort filled the place with images of "End of the Trail" which are pop and schlock and defeatist, often garish and misshapen, and offensive to indigenous people who are intent on maintaining a future.  It was a shadow of idealism.

https://www.youtube.com/watch?v=xRtnHc-JGBk  This is promo for the original statue by James Earl Fraser in the Cowboy Hall of Fame.  Bob and I were there during its restoration in the Sixties.  It's a "white man" fascination with defeat of enemies.  Isn't it?

https://www.youtube.com/watch?v=x2uSyu_YsCU  This is a discussion of the opposition to the image.

Mentioning this is a way of talking about a part of Laird's life that was covert, though never denied.  None of the publicity about his death has talked about it to protect his privacy and the institutions that use AK's Edwardian Methodist outlook in an excluding way instead of the radical inclusion that's exemplified by a different sculptor:  Malvina Hoffman's Hall of Man at the Field Museum in Chicago, which AK's acting students were asked to study, to bring to life as exemplifying the many ways of being human.

I'm only in touch with a few of our NU theatre acolytes.  Our cohort is 80 or older and vulnerable.  Few are willing to talk about private lives -- most are more Broadway than Hollywood.  Not everyone stayed in theatre.  Tom Foral became a painter famous for his portrait of Grace Kelly.  Kate Emory married Bill Pogue, and they are academic. Some, like Marshall W. Mason, are both academic and Broadway.  Of course, I write.  Would I write about EaglesMere, Laird, all the things that happened in Annie May Swift Hall ?  I think it exceeds me.  But it set Laird free long ago.  Death is just a transition.
Posted by Mary Strachan Scriver at 9:10 AM