Born in 1939, I came to consciousness and started kindergarten during World War II, so when I say “veteran,” those are the soldiers and sailors I have in mind. In particular, I was in awe of the young adult members of my family who were in the service. I thought it was all a matter of life and death -- and it was. 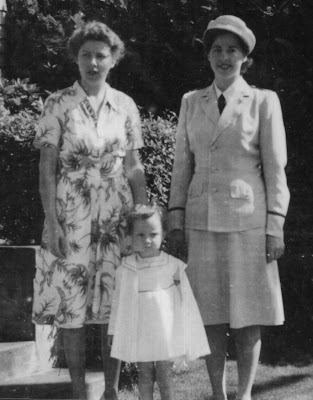 My maternal aunt had been the head of the operating room in a Great Falls, Montana, hospital. She joined the Army as soon as the war started and served in London, Oxford, and Rheims. My mother and I are standing with her. 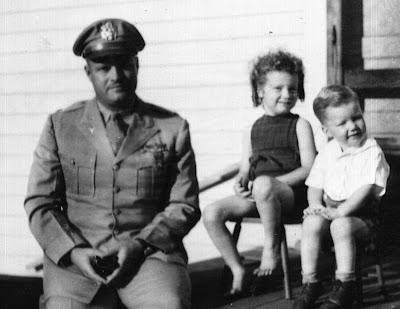 My uncle Seth Strachan had fallen in love with airplanes as soon as the barnstormers turned up on the prairies between the world wars. Through the war he flew bombers and transport planes, big heavy planes because he was a big heavy guy. After the war, Eisenhower asked the army to fly the editors of the major print media in the US into Germany to witness the concentration camps because he said otherwise no one would believe it. (He was quite right.) Seth flew the editors’ plane. 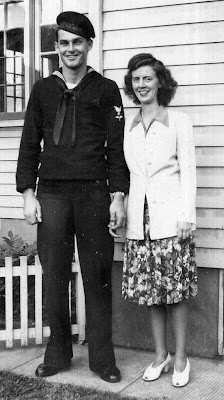 This is Larry Hatfield and his wife, Nadine, who was my mother’s cousin. They all grew up together and Larry taught my mother’s mother how to drive a car. Except for my mother, the Pinkerton girls married Hatfield boys. They were handsome characters, cousins to Mark Hatfield who became governor and senator of Oregon. 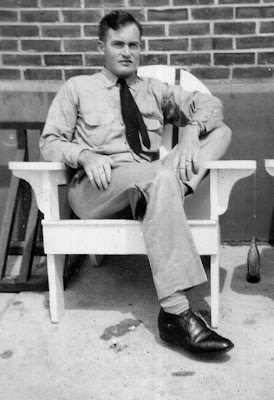 This is R.V. Hatfield, the only one of the Hatfields who didn’t marry a Pinkerton. He had red curly hair, so it was hard to figure out how my mother -- the only Pinkerton not to marry a Hatfield -- had the only children with red curly hair. 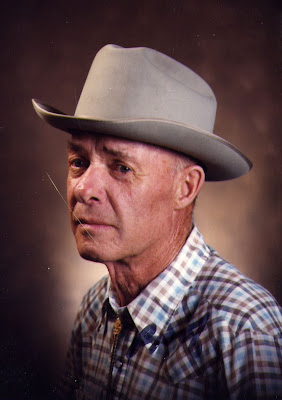 Harold T. Scriver was Bob Scriver’s older brother, tougher in a fistfight, a better shot, and Bob’s hero. He served in the 607 Tank Destroyer Unit as Sergeant under General Patton and saw violent action at the invasion of Normandy and the Battle of the Bulge. 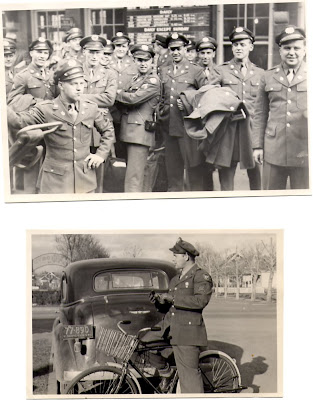 Bob Scriver served in Edmonton, Canada, as a member of the Army Air Force Band, Alaska Division. He was first chair cornet and sometimes played outdoors in weather cold enough to freeze his horn to his lips. That’s the band in the upper photo. Bob’s in the middle. 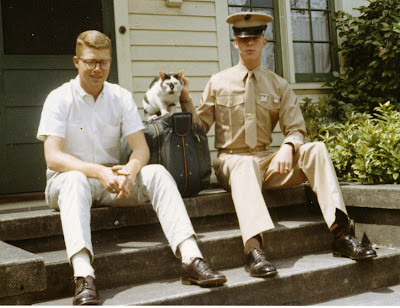 I would be derelict not to mention my brothers. Photo taken in 1963. Mark on the left. He’s the little brother in the photo of Uncle Seth. Paul, on the right, is now dead of a heart attack. Both my brothers served in the Marines for three years, which put them through college. Neither saw combat. Mark was on a ship in SE Asia where he became a chess master. Paul was stationed in Yuma where he taught marksmanship.

I salute them all!
Posted by Mary Strachan Scriver at 2:00 PM

These are wonderful photographs, Prairie Marie, you are so lucky to have them. I was born in 1940 and I only have a few photographs of my father, who was also in the war. He lost the use of a leg, and it changed him tremendously. By the way and as a coincidence I just finished a library book yesterday whose author is named Fred Hatfield – any cousin of yours? It was a great book about Alaska, called “North of the Sun, a Memoir of the Alaskan Wilderness”. Fred lived in the middle of nowhere all winter and did everything himself. A real good read.

Hey! You've got the kind of hair I USED to have! I'd never seen your "avatar" before!

Thanks for the reply Prairie Marie. My Hair? it usually does not look like that, not that fluffy – the picture was taken by my daughter for a laugh. As for your having not seen my “avatar” before – well English is not my first language and I don’t know what you mean. I thought it was a Hindu deity. So, I’ll take it as a compliment and say thanks.