In the post WWII years, the discovery of oil under the reservation made everyone giddy with the expectation that they would all become wealthy just as the Oklahoma Indians had. Even the whites expected to profit from the boom and in their imaginations, they decided they didn’t need to be a mission anymore. Therefore Stephen C. Smith declared they were autonomous and even turned back a $300 Board of Missions check!

Smith said: “My feeling right along since I am here is that this work has been misrepresented to your board. The local Protestants are mostly whites. . . The Indians are at least 80% Catholic and we have little chance in making any more progress with them than we have in the past. The continued acceptance of gifts for Indian work does not meet with my personal approval.”

Smith saw three possibilities: 1) the Methodists could simply get out, surrendering the church property to some other denomination (Harrod doesn’t say whether anyone considered some pan-Protestant community entity), or 2) simply admit they were a white church and drop the mission component, or 3) a second minister specifically trained for mission work could be hired to work independently.

He said, rather fiercely, “My own feeling is that mission money should be spent in areas where progress can be made. This is one area where money can better spent elsewhere.” He was in favor of shock therapy: “I feel very strongly that the local group could shoulder all expenses, or nearly all, if they were made to. A sudden jolt makes the boing hard at first, but it will make for a finer work in the future.”

The result of Stephen Smith’s fierceness was paralysis. J.H. Harris told Oscar Doane in a letter dated April 17, 1959, that over $60,000 had been spent to supplement the pastor’s salary and to maintain the church. Somehow no oil money flowed. Miss Bernice Jackson, a Mohawk, undertook a program of Christian leadership which showed that the white officials had not understood that educated Indians from back East were not necessarily welcome among Blackfeet supersensitive to being patronized.

One Smith was replaced with another, Edgar B. Smith. 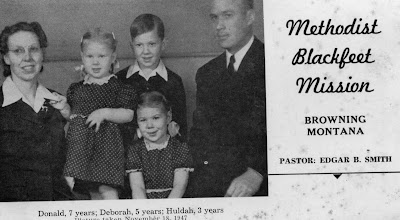 (This postcard was found by a person in New England who returned it to the Browning parish.)

Edgar Smith felt more of a missionary impulse. In 1952 there was an effort to start quilting project and three sewing machines were bought. The church continued to receive bales of old clothes. At the conference level the denomination didn’t want to give up the missionary aura. They went back to the idea of morning services for dressed-up whites and evening services for blanket Indians, now rather scarce.

1954 summer Paul Hollenbeck
This person is not discussed by Harrod and is not listed in the index. Probably he was a student or lay person who “held the fort” over the summer transition period.

1954-56 George Ritchey
Ritchey was evidently a standard “white bread” Methodist minister. The Presbyterian church had closed, giving their property to the Methodists. Now the former Presbyterian meeting house was sold for $4,660, to be a private dwelling. The money was immediately put into building the Sunday School and social hall, plus a bit of interior remodeling. These were the baby boom years and there was considerable demand for family events.

Minutes report: “Since the arrival of the Ritcheys, there has been a 300% increase in regular church attendance at Browjning and a one-third increase in Sunday School attendance. financial gains reflect the same general increase and enthusiasm. Membership Training Classes are now being conducted. The Indian Committee of the Conference has purchased $812.50 worth of new furniture, and the Browning Woman’s Society of Christian Service has added $325 in new furniture and upkeep."

Along in here somewhere, Bob Scriver left teaching in the Browning school system music program and was replaced by Don Schmidt. Schmidt turned out to be a limited teacher but a gifted organist and is was probably about this time that the electronic organ was acquired, a huge jump in formality and elegance. For the following decades Don and Kathryn Schmidt were pillars of the Methodist church in many ways while making their living through photography and a small shop on the highway through Browning.

The Church Ranch, which was the acreage on Willow Creek where the Methodist church building and parsonage originally stood, had to be used for the benefit of the Blackfeet Indians or they would lose their title to it. Allen Wilcox had a proposed a Folk School. Edgar Smith thought about truck farming, sheep raising, and dairying. The land was flood plain, best suited to being a source of gravel, but no one wanted a gravel pit. Finally it was leased for pasture and the money devoted to the church budget, by now a largely white church. But the Board of Missions, a different denominational internal organization, was legally entitled to the money. Blackfeet enrolled persons were beginning to mutter about their own entitlements.

Harrod, writing in the Sixties and Seventies that were preoccupied with justice in terms of poverty and race discrimination, was of the opinion that the denomination didn’t put enough effort into trying to save the church from being dominated by white members. He tended to be sympathetic to the ministers who -- after all -- had to get through their days without losing the members of whatever kind.

Harrod says little about the remaining ministers except for Jim Bell, whom he found sympathetic. I arrived in 1961 and served as an interim in 1988-89. I’ll try to assemble some memories in the next post.