THE YUCCA SENTINEL: a Story 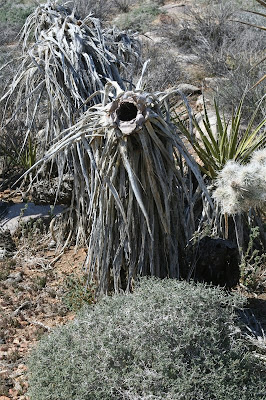 K had heard a strange sort of yodeling or singing for a little while. He was hiking in the desert -- as he so much loved to do -- and was approaching what seemed to be the entrance to a canyon, but it was hard to tell because the stony walls formed a bit of a labyrinth at what must be the entrance.

The sound was getting louder and it occurred to him that he might be a bit dehydrated, always a danger in the desert. Maybe his ears were singing. He was a prudent sort of guy, being part Scots, so he stopped to take a swig of water.

It seemed that there were words in this singing sound and he looked around to see whether someone else were hiking in this remote place. He hadn’t been here before but the truth was that he looked for locations where no one else came and this one had seemed to be unvisited for a very long time. Of course, he was aware that people used to live in villages near here in prehistoric times before what must have been a catastrophic drought hit, forcing them to leave. Where did they go? The coast where he lived? These days the coast was getting so crowded that if a person could only provide enough water, he would much prefer to live in the desert.

This time he understood the words and looked very closely in case of someone in trouble, though he really didn’t have enough water for two people. Then he saw the gaping mouth of the yucca plant. It didn’t seem believable, but it was moving. The sound was coming from it.

“I didn’t come into the desert to water plants!”

“Then why did you come? We’re happy here alone. We want people to stay away from us. They make trouble. They don’t understand us.”

“I love the desert for lots of reasons. How come you can talk?”

“I’m the sentinel. I’m on the boundary. I stand just outside the entrance on the edge of our circle of safety. Stop looking for that canyon. It’s private, it’s ours, you’re not wanted.”

“I won’t hurt you. I just want to see. I love to imagine I was here long ago when other people lived here. I want to understand what their lives were like.”

“Why don’t you try to understand MY life?”

The yucca shook its leaves like a collie shakes its coat. “Prejudice! Just because I’m different! You mammals are so arrogant!” It shook again. “But vulnerable!” The leaves shook in what seemed a dry whispering heartless laughter.

He thought to himself, this is going to be a long conversation. I’d better sit down. It would be better if there were a little shade but he had developed the eccentric habit of carrying a big black umbrella with him. He opened it and sat on his pack. The sight had the yucca tugging on its roots, trying to get away, which made him laugh.

The yucca was screaming in a voice so high it was nearly inaudible.

“Oh, stop being such a drama queen. I’m not going to hurt you. Who are you warning? Other plants? What did you think they were going to do about it?”

He looked around him, a little nervous now. “What else?”

“I don’t really believe in ghosts.”

“You don’t believe in talking plants either.”

This was probably a dream, he thought. Maybe the heat WAS getting to him. “What’s in that canyon? The ghosts of ancient peoples? Did they leave their pots and their bones and their mud-brick homes? If I go in there will I be walking where they walked?”

The plant was very still. It must have been thinking. “If I tell you will you just go away? Will you give up the idea that you have to go collect things, invade places, be part of something that doesn’t concern you at all?”

“Well, to be honest...” He was a bit of a romantic. He’d grown up in a family where National Geographics were piled high in the garage because they couldn’t bear to dump them or sell them. On summer afternoons like this one -- cooler on the coast -- he’d spent many happy hours trying to understand how to make sandals out of some kind of fiber, rabbit skin cut into ribbons and rewoven into a cape, all those ingenious objects. In fact, maybe those hours were the happiest of his life and he ought to have been a paleontologist or archeologist, something that would let him do this for a living. He had a notion he’d like to write about the desert, maybe poetry instead of science.

“I suppose you think you’re going to write all this down!” said the yucca in a critical voice. “Make yourself famous by invading our lives out here.”

“What do we care about being known? If we’re known, we’ll surely be invaded. There’s only one way to be safe and that’s to be completely unknown.”

The man reflected to himself that he’d often considered himself completely unknown but didn’t necessarily think that made him safe. Being a loner made him vulnerable. Maybe he LIKED being vulnerable. Maybe that’s why he liked the desert -- it gave him a bit of a rush to not be so cautious, so self-guarding, so preoccupied with prevention. All “pre” and no real action. But this yucca had a life without action, except for shaking its leaves. It couldn’t really escape anything. Still, it was warning the others, which is a good thing to do, wasn’t it?

That might be the thing to write, warnings to protect places. He looked at the yucca and smiled before he took a long draw on his water. Then he poured the rest on the yucca, which quivered with joy, forgetting to watch him leave.

The military drone, which was overflying the New Mexico desert to practice for desert warfare, was operated by a young pilot in a bunker in Indiana. He stared at his screen, amazed. There was a man marching along in the desert under a big black umbrella. “My God,” he exclaimed. “Can it be raining in the desert?” He went for more coffee, but when he came back, the man was still trekking along, against all probability.
Posted by Mary Strachan Scriver at 10:30 AM