STEP AWAY FROM THE INSTITUTION !! 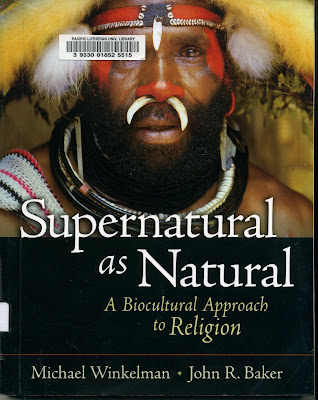 Religion arises as an emergent capacity from our animal substrate, which is then shaped by shared culture. The purpose of “religions” is to kindle, feed and shelter this capacity to make our way in the world. This understanding of religion entirely evades political issues and the question of what is supernatural. The work of Michael Winkelman, who studies shamanism and other religious phenomena and roles, takes this point of view and could not be more welcome to me.

I’m a little over halfway through his remarkable book -- written with John R. Baker, and intended to be a textbook for college students -- “Supernatural as Natural: A Biocultural Approach to Religion.” It comes to me via Interlibrary Loan from the Pacific Lutheran University Library. Luther would have loved this book. It’s not history of religion or philosophy of religion exactly -- more paleoevolutionary study of religion than comparative religion, which is usually about institutions and not the origins of religious feeling. But it is not conventionally psychological. Winkelman’s second book, “Shamanism” has been borrowed for me from Carleton College in Northfield, Minn. and I’m very grateful to these academic sources. One might say that my beloved institution at the moment is Interlibrary Loan and my shaman is the Valier librarian who knows how to negotiate it.

Winkelman locates shamanism as an individual role in a hunter-gatherer society. Since that was the way of life for the indigenous people here on the prairie east slope of the Rockies until a little before 1900, and since there is a certain amount of residual culture, traditional Blackfeet shamans are only now disappearing, second and third generation versions without the original impetus. But there is a line of thought -- not Winkelman’s -- that in some aspects modern computer-based, nomadic, education and corporate consultant roles are again more hunter-gatherer than institutional or agricultural, and therefore do create a place for shamans IF they know how to anchor themselves in human experience.

Winkelman reminds me about Anthony F.C. Wallace whose book, “Culture and Personality” used to be on my shelf right next to Victor Turner’s “The Ritual Process”, so where did it go? Why didn’t I notice before that his phrase “mazeway resynthesis” is about exactly what I’ve been calling whatever it is that happens in liminal space, that virtual “place” in the brain where one can sort and decide vital issues that formed even in pre-verbal infancy. When I dream about it, it’s always either a threshing floor or a mill wheel. Wallace is at the intersection of Native American culture and twentieth century psychiatry where I’ve been exploring since the Sixties. But neither one of us has had the information Winkelman is using that only recently could be accessed by technology and is still very incomplete.

“The Molten Chalice,” which is only my developing manuscript at present, is limited to the management of consciousness, which is something shamans know how to do. My premise is not based on “entheogens,” which is a fancy way of referring to mind-altering substances and practices, but does not discount them. Consciousness is a dancing flame. Winkelman accepts a kind of continuum between conscious and unconscious (sleep or coma rather than the phenomena that are always happening even when awake but not available to reflection) which extends from being hyperactive to hypoactive, and he is well aware of what we are just now understanding as modules of function in the brain (face recognition, awareness of space, etc.).

I’m sure Winkelman is out there ahead of me in his present thinking. I need his context, but I’m merely considering “liturgy,” the design of an event that is a time-art, like dance, music, and especially theatre. The meshing of theatre and liturgy was revealed (my “aha” moment) in high school dramatics classes in the mid-Fifties, a susceptible time for both me and the nation. It is one of my deepest roots.

But another key moment was a 1980 lecture at the U of Chicago by Stephen Toulmin who brilliantly and memorably thought about thinking. In the lecture he listed the different kinds of “thinking” necessary to get up in the morning. Without looking at the notes I saved, they were:

1. waking up. (How does your brain decide you should wake up?)

2. sitting up (without making a conscious decision)

3. putting on your socks (which is deliberate but includes choices and skills)

5. deciding what to eat

6. if that includes frying an egg, knowing when it is ready to turn over

And so on through the half-conscious, half-deliberate things one does in what might even be called a ritual, since it repeats every day.

All this theory contains and orders (provides a chalice) the huge amount of seductive and glamorous material gathered by ethnographers, novelists and poets, to say nothing of dance, painting, and all the other arts. The newest arts of photography and video are so vivid, so instinctual, so persuasive, that they demand the skills of the shaman -- is that what directors are? You could make a good case for it.

Wage-earning, grain-raising, are occupations that are almost over-patterned, ways of life that cry out for festival relief, a Dionysian impulse, whether expressed on a Saturday night drunk or a trip to Vegas. Over and over we come up against the struggle to reconcile the ways a million millenia of hunter-gathering has shaped us with what the merely ten-thousand-year-old agriculture-based life demands: institutions, cities, walls, storage, commerce, nations, war. Rigidity, predictability, armoring. This is a reconciliation that for individuals needs to be done with shamanic skills in a regimented world. No wonder we need drugs. Especially in a time that devalues the arts.

But we also need science and it is science that supports the work of shamans by recognizing the individual as an evolved creature of deep complexity and resourcefulness and validating the experience of religion as something really and truly happening at the interface between mind and ecology. Prayer, visions, meditation, awareness of the holy, are all things that can be perceived in the brain as electrochemical phenomena and changing blood flow. They are conscious to us as memory, which is managed by sense impressions. If that can be supported and sheltered by community and even institutions, that’s as it should be. If it is made justification for war or oppression, then it is evil.

Posted by Mary Strachan Scriver at 8:51 AM