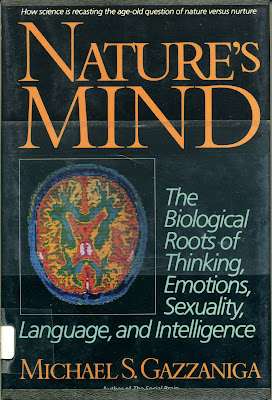 The subtitle of “Nature’s Mind” is ambitious: “The Biological Roots of Thinking, Emotions, Sexuality, Language and Intelligence.” Published in 1992 -- twenty years ago -- it’s now a little old-fashioned. This is Michael S. Gazzaniga’s report on “results so far,” mostly in the field of split-brain research. It had developed from that same lust for surgical intervention that justified lobotomies which severed the pre-frontal cortex from the rest of the brain in an effort to control intractable (socially unacceptable) behavior. The lobotomy scandal had demonic consequences for Tennessee Williams’ sister, one of the Kennedy sisters, and many others, mostly female. As it turned out, less brain was not more normal.

This time around the idea was to sever the corpus callosum, the thick connecting cable of nerves between the two halves of the walnut-shaped brain. The consequences hoped for was the quelling of electrochemical brain storms that threw the victim into life-threatening seizures. It was known that one-half the brain could even be removed or have been missing from birth without killing the person. For a while it was thought that the two halves were simply flipped-over mirror images, duplicates. But it turned out to make a huge difference which side was removed, which opened a lot of questions about what the difference was. To the naked eye, a brain just looks like oatmeal and jello. At least that’s what the special effects people use in movies when brains leak out.

But it has developed that the brain is pretty complex. And the difference between one side and the other turned out to be what Gazzaniga was at this point calling “the Interpreter.” (Later called the “global neuronal workspace.”) Nerve networks for various purposes were known to exist, sub-structures of the brain appeared to have independent reconciliation and sorting duties, but no one had realized that there was a location -- usually on the left side in a right-handed person -- where the inputs of these various sub-structures (mostly never available to consciousness) were given a final “staging” that filled in blanks and dropped out what didn’t match pre-existing expectations. This led to a lot of clever experiments that have over the years erased any idea that humans are “objective,” but in compensation began to uncover a lot of human resourcefulness.

I won’t try to summarize the book more than that, but I marked several ideas as particularly interesting.

Page 68. “In 1976 D.G. Freedman . . . was able to demonstrate clear differences betwen newborns of Chinese ancestry and matched groups of Caucasians on temperament items from the Cambridge Neonatal Scales. Although the two groups were indistinguishable in many areas of development, European-Americans tended to reach peaks of excitement sooner and to show greater instability to new states. Chinese American neonates, on the other hand, were calmer, steadier, faster to habituate or accommodate to external stimulation, more highly consolable when upset, and better at self-quieting.” Jerome Kagan got similar results at Harvard. No one has performed this comparison on Native American babies though their basic genome is also Asian

p. 149 “Asians have long been known to have a low incidence of alcoholism”. . . But consider North American Indian and Eskimo people whose genes are Asian. “Both of these groups are notorious for having drinking problems.” Both respond physiologically to alcohol in the same way. (Turn red with “Oriental flush,” palpitations and nausea.) Even babies given milk with a drop of port in it react this way. Why do Chinese people not become alcoholic? Does culture override physiology?

p. 147 After describing “kinds” of alcoholism, he proposes that “the evidence for a genetic link to alcoholism, particularly in Type 2, is growing. (“Occurs only in men, is characterized by antisocial personality traits, criminal activity and the pursuit of alcohol for its euphoric effects.”) Hard for the environment to impact. Still, inheritance is not inevitable -- 20 to 25% inheritance in sons with alcoholic fathers.

p. 79 “There is a good body of evidence to suggest that language can be dissociated from general-purpose cognition. For example, it is easy to show that you can have cognition without language. Animals, infants before they have a language, or stroke victims who are aphasic, can all display intelligence without the benefit of language. Looking at it in the other way around, patients who become demented are frequently able to speak relatively normally, but have little capacity to carry out the simplest problem-solving behavior.”

One whole chapter is about addiction theory. He is critical of using addiction models to account for obsessive behavior like hypersexuality because no substance is ingested and there are no physical withdrawal symptoms if the activity is stopped. But I think he overlooks the ability of the body to generate substances and the thin wall between addiction and habituation.

p. 134 He speaks of the advantage of the “interpreter structure” in the brain and likens it to a “system that allows for thought about the implications of actions, generated both by others as well as the self, will grasp a social context and its meaning for personal survival. Thus, you can both carry around and have access to your own “video camera” of events in which you are continually involved and think about the impact of your actions on your working environment. Furthermore, you can come to see the difference between your public and your private selves, as you realize that others think of you in terms of their interpretations of your actions. You come to learn that the public’s theory of who you are can be different from your own personal theory of being who you are and how you feel. Human beings learn quickly that feeding those two different selves is a major function of human existence and survival.” Ouch. I’m watching “In Treatment” on DVD’s. How true. I think the scriptwriters read this book.

So here’s the bottom line: p. 113 “The special capacity to make an inference about both internal bodily states and external actions of ourselves and others seems, when fully developed, to reside in the left hemisphere of humans, and is called “the interpreter.” “The interpreter is a powerful system that is at the core of human belief formation. Without it, we would be little different from animals. With it, we become wonderfully inventive and individual even though our nervous systems are more similar than not. The selection pressures developed in humans a capacity that saves us from being completely beholden to the environment -- and thus, in some ways, has outsmarted itself.” I’m reading about this capacity in order to reflect on liturgy, but it is such a seductive idea that I keep getting distracted. I may be outsmarting myself.

Posted by Mary Strachan Scriver at 8:31 AM