Not long ago in the Valier library my eye fell on “Wyoming Summer” by Mary O’Hara, whom I knew (as does almost every kid who loves horses) as the author of a trilogy: “My Friend Flicka,” “Thunderhead” and “Green Grass of Wyoming.” In fact, I read the three just as I began adolescence and the last book was one of my early erotic finds. The intense moment was when Ken, the hero, and his girl friend are sitting on a bluff looking out over the land and the handkerchief in her pocket began to move up and down because of the movement of her quick breath making her breast (eeks) move. They kissed. That was it. I read it over and over, convinced it was the very peak of intimacy. In fact, I put a little homage in the last of my “Twelve Blackfeet Stories” -- two teens sitting on top of the Sweetgrass Hills, looking out over the east slope of the Rockies. I didn’t have them kiss, just share the view.

I wanted my own copy of “Wyoming Summer,” O’Hara’s redaction of her journal for the years she and her second husband ran “Remount Ranch,” the prototype for the Goose Bar Ranch. When I discovered there were other books, I ordered the ones I could find. Her own name changed as she married and divorced.

Rather awkwardly, she or her publishers had a way of changing the titles of her books, so “The Son of Adam Wyngate” became “The Devil Enters by a North Window.” For once, this was a book in which I was “immersed” for a couple of days -- neglecting everything else. It is not very covertly derived from her own life: her Episcopalian father, her Edwardian childhood (b. 1885), her struggles with sex and religion and the rending tension of their interaction, especially as in her life with her first husband. She was 67 when she wrote it, so probably she was free to plunder reality in ways that would have been impossible earlier. (The “Flicka” books were written during WWII.)

The story is about two brothers, one a gifted and gentle pastor in a controlled and genteel setting, and the other a sociopath who married for money and wants even more. (Cain and Abel.) It’s rather transparently derived from her first marriage, even as “Flicka” was about her second husband and their life in Wyoming.

The story is placed near Boston and Kennebunkport, where that elegant and wealthy way of life held on even into the present, but the theological assumptions on which it was based were changing radically. Mary’s first husband, Kent Kane Parrot, was a political boss in Los Angeles, the head of a “machine” who controlled the mayor. (My other current fascination is the television series, “The Wire,” and Parrot is right out of it.) He was her mother’s third cousin. Her father was opposed to the marriage. O’Hara went with Parrot to LA in 1907 so he could get his law degree from USC Law School, where he was a star football player. He and O’Hara, his first wife of three, had two children, a girl who died of cancer in childhood and a boy on whom O’Hara based “Ken,” in the Flicka books. Parrot and O’Hara each divorced and remarried at the beginning of the Twenties and in that decade O’Hara wrote synopses for silent films.

The Wyoming ranch was acquired in 1930, at first a sheep ranch, then a horse ranch and finally a “boy ranch” when they ran a summer camp for wealthy boys from back east where Mary still had contacts. The appeal was teaching the boys to relate to horses in a semi-military way, since her second husband, Helge Stur-Vasa had been a remount officer. She wasn’t there all the time since she continued with writing and a parallel career as a composer of musicals, notably “Catch Colt.” Music runs as a theme through this later Wyngate novel.

But the crux of the story is how to live in a changing world, with much of the change affecting sexual assumptions. I was surprised at how modern it seemed sometimes. Bartholomew Wingate, the gentle minister, has a counseling practice that attracts unhappy women, often lonely and sometimes oppressed. One is suicidal, another has anorexia nervosa. His wife and the mother of his five children, Louise, is beautiful, competent, a warm mother and a sexy wife. She is soon revealed as unfaithful -- not once but always. At the end of the book (spoiler here) she is revealed as a victim of sexual seduction at the age of four -- not penetration but being kissed in an erotic way that imprinted her with the constant longing for more.

This was a time when sex was the main focus of everything, especially denial of one’s “animal” side and one’s access to economic prosperity. Bart’s attempt to reconcile love and sexual jealousy drives him literally mad and he ends up in a strait jacket being force fed while he has “surgery of the soul.” When he recovers, thanks to the love of a beautiful, young, faithful woman, what does he do? HA. Goes back to his wife. The rich wife of his brother dies, the brother buys a more grand house and remarries, but at least he leaves.

The structure of the book is much built on the lives of the five children, vivid kids who provide “teasers” as they struggle to figure things out and to survive their adventures in climbing, swimming, and attacking each other between reconciliations. There are servants: this is quite “Upstairs, Downstairs” in tone. In fact, someone ought to make it into a series. The episodes very apt, cliff-hangers everywhere. Pages will go along with brisk and lively one-sentence paragraphs in an energetic but understated genre fashion. Then everything comes to a halt while the theological issues get dragged to the mat for a good wrestle. I think I’ll take them on tomorrow. 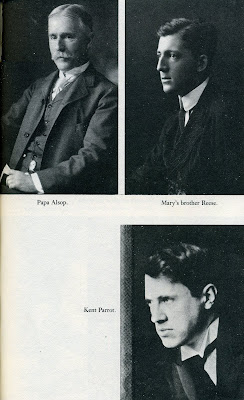 Posted by Mary Strachan Scriver at 10:43 AM

Mary, I am fascinated by your posts on Mary O'Hara. Having grown up on the FLICKA trilogy, found WYOMING SUMMER in the 80s, then read FLICKA'S FRIEND last year and now just finished NOVEL IN-THE-MAKING, I have had many of the same thoughts about her writing, but you pointed out several connections to Mary's life (the infantalizing by the husbands!) that had not occurred to me. I am sure I will re-read these entries. Thanks again!