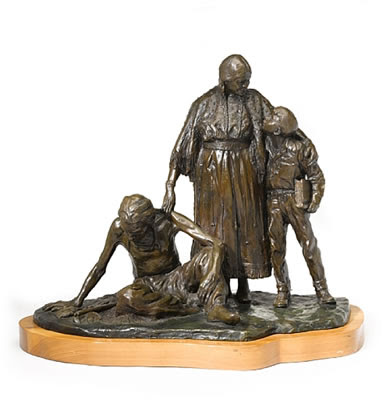 "Transition," a bronze sculpture by Robert MacFie Scriver, portraying generations of Blackfeet.
It was originally meant to be an heroic-sized (life-size plus one-fifth) monument in Browning.

The best of Bob Scriver’s work is finally coming online in a way we would never have anticipated. He hated computers in general, picked a BIG fight with me when I wanted to put his autobiography (the one he was writing himself on legal pads) on a little all-in-one early Macintosh I was using in Heart Butte. He never would have imagined the Internet. I’m suspecting that this casting (above) was made in the Sixties in our own Bighorn Foundry that we built in the backyard and that probably either Carl Cree Medicine or I patined it.

The early auctions began, rather transparently, as ways to clear out the warehoused art stock of certain persons under the guise of helping the CMR Museum or Indians or some other cause. When they came around to ask Bob to donate a piece of art, he was outraged. (“I’m broke already!!”) But one was frozen out of the buyer “social classes” if one didn’t, because the auction was also an important bonding event for collectors and their supplicants. So he invented the Scriver Buffalo Skull Award, which didn’t cost much to cast and wasn’t going to be affected by the general state of art sales.

Now, of course, everything has changed, but Bob was right to be wary of auctions, because now there are many auctions, the generation that was betting on which artist was going to be the next Charlie Russell is ancient or dead, and there is a Charlie Russell wannabe under every bush, painting away as fast as they can. Aside from that, works go through auctions back east where people know nothing but abstract expressionism or conceptual art and no one knows anything about Charlie -- they have a vague trace memory of Frederic Remington.

In some ways, bronze sculptures have become as much victims of technology as books have been undercut by electronics. Ceramic shell casting is so cheap and easy, with results that are so indistinguishable from fine lost wax casting (except by experts), that everyone casts everything, slaps a store-bought slick-as-plastic patina on it (maybe in COLORS !!), and sells it for trinket prices. Worse, they aren’t very particular what they make molds off of -- copyright or not -- and they aren’t particularly good at making molds.

It gets worse: with laser technology, you can stand a horse in front of a machine and have a computer-recorded exact replica of the horse without the intervention of human judgment at all. Is this art? Is an upside-down urinal art? It’s up to the buyer.

Personally, I think it is worse to have a monument-quality sculpture cast by the artist by the same lost-wax method that Rodin used, go at auction for $800. And worse than that, I resent the work being carelessly described by some racist shallow catalogue maker as a “buck, squaw and papoose.” These are portraits. Chewing Black Bone, the man sitting down, was a dignified ceremonialist, said by some to be the last warrior to have taken a scalp. He was blind, probably from trachoma. In summer he lived in his lodge on the Mad Plume ranch, mending his own moccasins and remembering the old days. He was a friend and informant of James Willard Schultz, who called him “Ahku Pitsu.” I only met him once, early in the Sixties.

Mae Williamson, the woman in the middle, was a dignified and sophisticated woman who was married to a white lawyer. (Later she had other husbands, all Blackfeet.) The dress she is wearing, embellished with the eyeteeth of elk (count’em and see how many elk it took), is worth thousands of dollars. The boy is “Tomorrow.” We’ve lost the name of the boy who posed. Maybe he’ll see this, recognize himself, and tell us how he turned out. He’d be a grandfather by now, fifty years older. None of this is romantic foofoo stuff invented by a Hollywood-hypnotized story spinner. These are just facts.

I complain a good deal about the Industrial Cowboy Art Cartel, who try to lock up the value of their own acquisitions by whatever means they can. Wheelin’ and dealin’, we say. In these new phenomena of slice ‘n dice, bring-’em-faster auctions the buyers are often not present (they buy via the internet), no informed persons explain what the context of the pieces are, and everyone is monitoring a ticker-tape website that shows what the artist’s work sold for last time. They are incredibly destructive to the reputation and value of Western American art.

But at least it is not the racist divide that is presently between those who love Western art, Western literature, and Western history because they are essentially a conquerer’s account of the empire of America with a nod to the valor and glamour of the “worthy opponents” -- as opposed to the flipside: real people’s history of previously invisible kinds. (Example: Mian Situ who suddenly makes real the Chinese in the West.) This divide is in all three contexts and it is decimating the organizations devoted to the fields, especially those that include with the amateur aficionadoes some serious academics who have been alert to the re-framing of history by people like Howard Zinn. Young people are now quite different in outlook and opposed to exploitation. It may be that the buckskinners and cavalry re-enactors have smudges of fascistic elitism and triumphalism. The idea makes them so defensive that no one wants to go near the topic.

Right-wingers. God love ‘em. Bob Scriver was among ‘em. Not that the forces of Red Power didn’t do their best to change him from an innocent to an entrenched opponent. This man grew up thinking he WAS Indian and got pushed out of the category by Indian people who hated the FBI -- who did their best to reinforce hate, even though the FBI was organized in the first place to oppose the many murders that came out of the great early oil strikes in Kansas. Wounded Knee was Wounded Pride. So the foxes sit quietly in front of the hen house with their tails curled around their well-polished wingtips while the weasels come and go.

I’m not meaning to accuse the amateur aficionadoes, who are off creating sonnets that ask “Why Gone Those Times?” I’m not ignoring the young rascals who say, “Good riddance.” It’s the commodifiers I’m after. In the meantime, sales everywhere are really miserable.