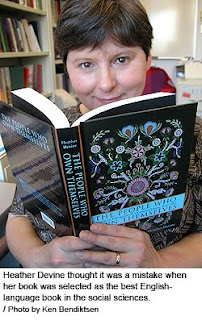 Yesterday at the Valier library I checked out the winter issue of “Montana, The Magazine of Western History” without looking at the contents. When I got home I was delighted to find an article by Heather Devine, whom I met years ago on a list serv of indigenous people. She is the author of “The People Who Own Themselves” http://people.ucalgary.ca/~hdevine/ which was published by the University of Calgary Press at about the same time as they published “Bronze Inside and Out,” my own book about Bob Scriver. We’re border-jumpers, who find the 49th parallel a nuisance because we have roots and interests all over the high northern plains and relate to that ecosystem rather than political divisions. Not that there isn’t a price to pay, especially now that US Homeland Security is trying to swallow both the Blackfeet reservation and Glacier National Park in the name of controlling the border.

The article in “Montana” by Devine, called “Ahead of his Time,” is about Joseph Kinsey Howard and his book “Strange Empire.” A life’s work, the book was not quite finished when Howard died of one of those mid-life heart attacks while driving a publisher’s rep to the airport in 1951. His life was almost as much an illustration of the Metis predicament as it was an accounting of the cost to a people created when European men took indigenous wives, forming what nearly became a separate nation. Reconciled within their own world, they were estranged from both their culture sources which tried to maintain controlling boundaries by enforcing stigma and restriction. Remarkably, the Metis are still with us, only invisible until you learn to recognize them and then everywhere around here. At the edges of frontier there are always mixtures, creoles, as rich in life as any shoreline.

Because I’ve mentioned Howard now and then in this blog, I get inquiries about his life, though I’ve never systematically worked through the material about him. Neither have I made a study of Riel or Dumont, who echo Crazy Horse and Sitting Bull in their relationship and style. Riel and Crazy Horse were the mystics. Dumont and Sitting Bull were the practical strategists. Howard was a little of both but maybe more visionary than academic, though he worked hard to meet academic standards, which is the point of the article.

There is currently another of those evolutionary academic discipline crises erupting between scholar-historians with all their trappings of footnote, citation, bibliography, index and so on as contrasted with the story-tellers who pick up dreams and tales of intense passion and symbolic images. Consider that the Western History Association http://www.westernhistoryassociation.org/ has just given birth to an offshoot, the WILD Western History Association. http://wildwesthistory.org/ The stiffened collars of the professors smash into the open-necked flannel shirt guys. There are phonies and martyrs on both sides. Even a few women. Damn few minorities.

Like Heather, I count Howard as a martyr but not a saint. He was a wonderfully charismatic and seductive man in the style of Clark Gable, mustache and all. His and his agent’s hope was that “Strange Empire” would finally become a movie. (It’s still a good idea.) His publisher, William Morrow, made the choice stark: do you want to produce an admirable but unread academic book or do you want to sell books? The same untenable choice persists today, but in 1951 with an ailing mother and health issues of his own, Howard was so paralyzed that he was advised to seek psychiatric help. Since he was in Great Falls and considering that post-WWII psychiatry was about conformity, I doubt that it was good advice. After Howard’s death Bernard de Voto tried to reclaim the not-quite-finished manuscript. Just this last few weeks arguments about de Voto have been going back and forth on the Western History listserv. This is an unfinished issue. Devine’s book about Howard is maybe more relevant than ever.

Now that we are post-modern and some of us are even post-post-modern, meaning that one has to actively decide how to read and reflect rather than simply accepting the consensus wisdom, there is a lot of thinking and meta-thinking to do. Can we accept the experience of people actually IN the subject matter, with full emotion and moral emphasis? Is the white academic Euro-defined scholar any wiser than the rest of us? Is there any such thing as a fact? What does gender and sexuality have to do with it, especially when there is an ethno-divide that runs between partners but not their children, who must create a new culture? Why do we privilege paper records over real speaking people in the landscape that shaped them? Why is love excluded?

Some have tried to read between the lines of Howard’s partnership with his mother instead of a wife. They don’t seem to get the reality of money, both the cost of his mother’s bad health, of his own bad habits (alcohol and tobacco), and the expense of travel and correspondence when doing historical research. This was all before the Internet which has at least cut down on the cost of copying and mailing materials. But Howard was basically living on the profit from his earlier book, “Montana, High, Wide and Handsome,” plus being paid for managing the Regional Arts Roundup, which must have been a predecessor of the contemporary Montana Festival of the Book. It had just concluded when the killer heart attack struck.

While at the library I also checked out a Peter Bowen novel. Bowen lived in Choteau for a while. A small Metis community persists there as well as at Heart Butte. St. Mary’s and other quiet corners, partly because the Cree-Chippewa-identified Red River people were assigned to this reservation and their descendants still persist. Bowen restores all the passion and excess of a proud Metis, along with the French fiddling and dancing that show up at Valier parades. In Choteau there is a replica of a Metis cabin.

The US scholars wrote off both Howard and Devine as Canadians, and vice versa from the other side of the border, but Devine had a validation not available to Howard. She won an award from the Canadian Federation for the Humanities and Social Sciences. The $1,000 cheque prize was immediately spent on the Christi Belcourt pointillist acrylic painting that is the cover art for her book. The pattern is of Cree-Chippewa floral beading on black velvet.

Posted by Mary Strachan Scriver at 11:14 AM

A preview of Heather's book is here.