"THE PEOPLE WHO OWN THEMSELVES": A Family Story 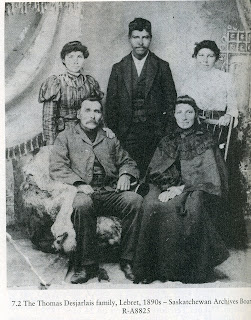 Heather Devine’s book, “The People Who Own Themselves: Aboriginal Ethnogenesis in a Canadian Family 1660-1900,” manages to combine two forces: the story of a new people in a “strange empire” and the story of her own family. By focusing on the Dejarlais line of her ancestors, she has found the artesian force (I’m tempted to say “green fuse”) that drove her ancestors through times of such confusion that most people didn’t even know it happened. Some people are not very anxious to have you find out either.

With the clarity and careful footnoting of a competent academic and the warmth of a family member, Heather traces how the bringing of Euros and Iroquois onto the prairie parklands (potholes and poplar bluffs) to manage the fur trade collided with the first peoples already in residence, gradually created a new people called Metis/metis. (There are political and grammatical implications to the capitalization, but those are for hair-splitters.)

The first force is the most basic: the Euros needed women and took the ones available who were indigenous in the “fashion of the country.” No need to be coy about it. It was more than sexual: a household needs to be maintained. This connected the relatives of the woman, but not those of the man who were back in Europe or on the east coast. Sometimes the men discarded their wives when they left for home or moved on. Sometimes they went on to marry them in the Christian way, which meant living in a frontier town with a mixed population. In a generation, the children of mixed heritage chose whether to identify with their mother’s people or those of their father who were on the frontier: uncles and cousins. If they went back to their mother’s birth group, they were absorbed and continued as “Indians.” Some were left in between, “mixed,” but still had connections to both sides of their heritage. In time they intermarried with each other, forming a people. None of this was very easy, though it must have been inevitable, and the Hudson’s Bay Company stood over the whole economic picture, concerned with profit and forcing allegiances.

We forget much of the history of those times. As always, the Mississippi River stood as a boundary. On the right side of it, the country was French. On the left side of it, the country was Spanish. A decade or so before the American Revolution, England managed to rout the French from Quebec. Then the American Revolution drove a wave of English loyalists into Canada. This transformed Canada into an English Empire, but the western part, then called Rupert’s Land, was put into the hands of the Hudson’s Bay Company. Many of the residents remained culturally French; many of the Quebecois went west. When Jefferson “bought” Louisiana, it became part of the United States. In the southwest the criollo and mestizo people were forming as New Spain.

Closely following whatever records she could find, Heather traces out the story of her Quebecois ancestors who went west, formed alliances through marriage, became a mixed people, and then were confirmed (the right technical term!) by Christian missionaries asked to help to impose order on the unruly and sometimes suffering people. Hudson’s Bay, faced with the scarcity of furs caused by their own rewarding of overtrapping, cut loose anyone with weak ties to the management.

By the 19th century the term “The People Who Own Themselves” had come to mean those independent Metis bands with their strong sense of who they were. With the visionary leadership of Louis Riel and his cousin Dumont, the Metis resisted Canadian ownership by trying to form their own country. This was suppressed harshly -- Riel, Dumont and others captured and hung -- which sent the remainder out across the northern prairies to form, inform and energize people on both side of the 49th parallel, an arbitrary boundary unlike a river.

This story that mixes family ties with economics and idealism is of considerable concern in Canada because of the felt need to sort out people as indigenous versus immigrant. Are the metiz a people who need a reservation or should they simply be considered citizens? In the end many of the people decided for themselves, going back to blend in with the maternal tribe or accepting their fathers’ world.

All of this happened so recently and is mixed with so many other battles and yearnings that it has been hard to understand, particularly for the people themselves. I vividly recall a grandfather telling me about trying to explain to his grandson that they were not Blackfeet -- this was on the American Blackfeet reservation -- but neither were they Cree. “But then what are we?” asked the boy and the grandfather didn’t have the facts in order to explain. The emotions about his kind, called “Cree” here, ran high, both defensive and scorning, The boy really NEEDED to know. It was no vague itch about origins but an immediate social issue.

In the changing terms of what was powerful, what was economically viable, and what the signs and meanings of their lives were, strange anomalies appeared. A metis man who worked as a servant to a priest took to wearing a cassock and, away from the priest, imitated the “magic” for his people. One idea was that a suit of proper British clothes became a sign of near-supernatural power, because the Hudson’s Bay Company gave such a three-piece suit to their valued employees. On the US side, this was called “citizen’s clothes” and not so empowering. But I was impressed by my own observation that many white man’s imports became taboo to traditionalists, for instance, forks. Bundle Keepers were told not to turn their meat with forks.

Such uncontrollable elements as the ability to borrow to buy trading stocks or the means and distances of transportation were the real determiners of success. Against that, family loyalties, alliances by marriage, and skills learned on the land were all valuable but sometimes limited. Yet the people’s identity survives in stories, names, songs and attitudes. The MATL international corporation chose their first land seize victim without realizing he was Metis. Their mistake. And this Salois understood the big picture. He quickly found allies. And new enemies. That’s the way of history. Even though the international corporations have new names.