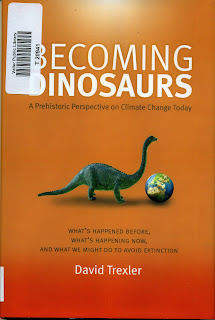 When people aren’t cautioning us about following Rome into the crash of civilization, they’re warning us about going extinct like the dinosaurs. They’re just trying to scare us, right? Well, right and wrong.

I first met David Trexler when he was about nine or ten years old. We often stopped in Bynum to check out the rock shop because Bob and the Trexlers were long-time tourist business owners. In the Sixties one night Bob Scriver and I went down because David’s mother was selling her skeleton with an arrow embedded in it. (Not HER skeleton, but she owned it, kept it in a case to show tourists.) Marion, widowed, needed some money fast, but Bob decided against the skeleton. In the Sixties we didn’t know about the dino eggs but they were probably in the buckets around the room.

Here’s a media account of the dino egg story.

Now David Trexler is all grown up, a full-blown paleontologist with a Master’s degree from the University of Calgary. And he has written a book: “Becoming Dinosaurs: A Prehistoric Perspective on Climate Change Today.” It’s both reassuring and scary. Reassuring because climate change is not as cut-and-dried simple as the media makes it out to be. But there are still a lot of variables out there and some of them -- the most scary one, in fact -- have not been considered until only a few years ago. You ever hear of “methane clathrate”? Me, neither, but if you did, I’ll bet it was in the news coverage of the big ocean oil rig explosion and spewing. One of the problems -- maybe causes -- relates to this material of methane clathrate clogging the pipes and valves of the rig.

Methane clathrate is basically ice that burns, even explodes. It forms in cold water and there are huge deposits on the “shelfs” of land under the ocean along the coasts. If the ocean deposits -- or any other methane clathrate deposits -- get to a certain temperature, they will be released as gas and rise to the surface. There could be enough released to sharply increase global temps to unendurable levels or even to smother nearby oxygen breathers.

Methane, you know, is the gas that cows and frat boys contribute to the atmosphere at the literal end of their part of the food chain. But the amount is trivial compared to what comes out of smokestacks, cars, and various natural processes. It is part of a molecular dynamic that shapes what life can exist on this planet. Only a few centuries ago humans figured out that “air” was actually something, that it had constituents, and that they changed -- much less found ways to understand how the proportions of gases have varied over the millennia, why, and how that affected living beings. We still know a very limited amount about these unseeable gases.

If we keep on with global warming, it will not just mean that you can grow plants farther north. (Today the Great Falls Tribune had a story about changing the boundaries of the growing zones.) Mostly people are thinking in terms of gradual change, gradual enough to deny. But global warming could easily heat the ocean, which is our moderator of temps planet-wide, enough to release a LOT of methane ice at once which WILL create an actual apocalypse, a sharp rise in planetary temperature over a period in between one and two decades, which will kill a very high proportion of humans and other living things. This has happened at least once in history, according to the records preserved in geology.

Most of the thinking about global warming has been in terms of a household thermostat. We like gradualism -- so we have time to adjust. Our understanding of evolution has also been that it was gradual. But lately there has been new willingness to consider sharp changes -- for instance, genes that relocate or precipitate a cascade of changes. Likewise, there has been a new understanding of geological processes. It’s hard to envision a mountain jumping, even as one looks at photos of Mt. St. Helens erupting, and harder to think about its impact on the atmosphere once the effects are very high.

Much of the thinking about the effects of methane ice melting is described by D. Dorritie on a website called www.killerinourmidst.com and there are other sources of information, but David Trexler’s book is a colorful, thoughtful, deeply informed description that will have you pondering how to take action. The OTHER and quite bright side of understanding methane clathrates is that the deposits are holding energy (methane is natural gas, right?) in amounts that dwarf any oil or coal deposits on land. Now that we know it’s there, and if we can figure out how to “mine” it, we will have a source of energy that can last a very long time.

I’ve been thinking a lot about “short term” morality, which is expedient and can bring in quick profits -- maybe at very high cost, like borrowing against payday at an exorbitant interest rate -- as opposed to “long term” morality which might mean saving or waiting because of the future benefits and resources. It’s also the difference between a few people “making a buck” now and everyone profiting in the long term on a dinosaur scale.

People like David Trexler who work daily, hands-on, with the bones of life forms long gone, while living on the east slope of the Rockies, knowing that those mountains are the THIRD cordillera thrown up by plate tectonics and then worn down to a peneplain, feeling the sense of embeddedness and participation that one gets from living here under high winds and relentless cold, can step away from the greed and markers of success in the cities and corporation board rooms. Grounding in science becomes infused with a kind of mysticism, a protective merging with the land. Okay, it’s religion. It supports a morality.

I’ll go even farther and say that industrialization -- world-wide -- has resulted in a kind of “frakking” of the heart, but this landscape and awareness of its long history since it was part of Gondwandaland, the unified first land mass, will restore you. “Becoming Dinosaurs” is an excellent meditation manual.

Just read it. Great book! I hope it makes it out to a wider readership than word-of-mouth for paleontology buffs out West. Maybe it would give some Hollywood type an idea for an "On the Beach" type of movie. We managed to deal with the Ozone Hole and Nukes. Let's see save ourselves from this next scary thing.