I was going to compose a nice little post about cats with original sketches (!), but I have to go to the county seat to buy the only kind of cat food the indoor cats will eat, so there’s no time to draw cats.  I’ll use photos.  My theme is this: the central problem of human love is managing the relationship between physical love (AKA sex) and emotional love, but cats can solve the problem for some.  Essentially sensual and adept at cuddling, they can be attached to one's emotions but if one detaches, the cat shrugs and walks off.  What a relief not to have responsibility for an emotional meltdown!   Only a few men have figured this out.  Maybe they secretly like to cause a meltdown, thinking of it as a compliment meaning the love was true and total.  But that's dog-love.

Cave cats -- in those days they were "all-consuming" lovers!

My mother did NOT like cats.  She grew up on a farm in Southern Oregon where people in remote valleys slept outside on porches in summer.  On chilly mornings the big long-haired farm cats would come warm themselves on the sleepers and my mother always spoke of them as smothering, tickling, resistant creatures.  But to me a cat was most desirable -- I longed and yearned for one.  My father didn't like anything that would prevent travel and pets were exactly that.  Kids were enough trouble, but part of the point of the travel was to network family and we were family. 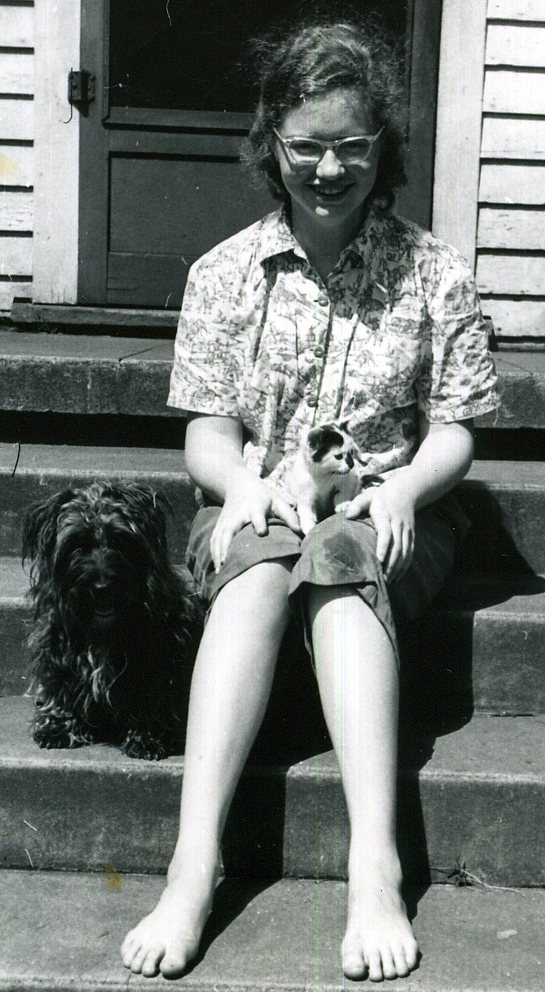 But my mother, kind of unconsciously, equated hair with sex.  When I got to adolescence, she wanted my hair CUT SHORT.  Actually, my uncontrollable hair would be a wonderfully fashionable explosion today, worthy of a Paris catwalk!  But sex is much more fashionable now that it was in 1953.  So me and my bushy red hair were escorted to "Monsieur DuPuis" who cut it short as instructed.  He asked my mother,  "Would Madame like the neck shaved at the nape?"  (Napes are SOOO sexy!)   "Yes, yes, yes, Monsieur."  Of course it grew back and by that time the family was short on money so my mother cut it.  (She was getting her teaching degree, realizing that my father was never going to make much money -- or maybe it was the beginning of the two-income family all across America.) 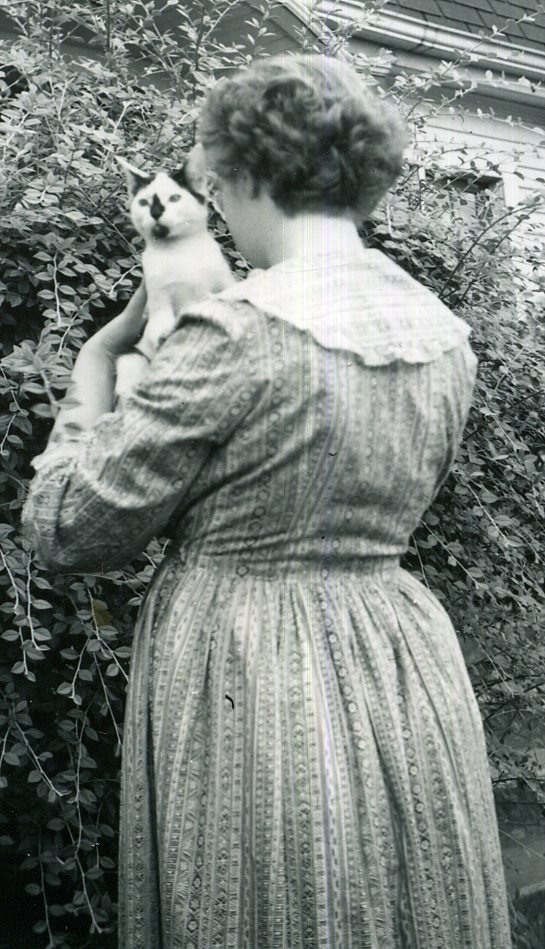 I named the cat "Willis," after the alien in Heinlein's "Red Planet Mars."  But it mostly went by the name of "Mary's CAT" which carried overtones of indecency.  About this time I got one of the two bedrooms in the house to myself, the two boys got the other, and the parents went to a foldaway bed in the living room.  Willis spent his nights outside.  He was unaltered and a fierce fighter who occasionally broke a back toe in battle.  My mother just cut them off with the bolt cutters.  (She came from a farm.  She had killed a lot of chickens.)  He also caught ringworm, then shared it with me and my brothers, so he was black and white and iodine purple, and we kids were required to stand on a stool while my mother searched out the little pink circles and painted them, which made us scream.  We humans were cowards, except for my mother. 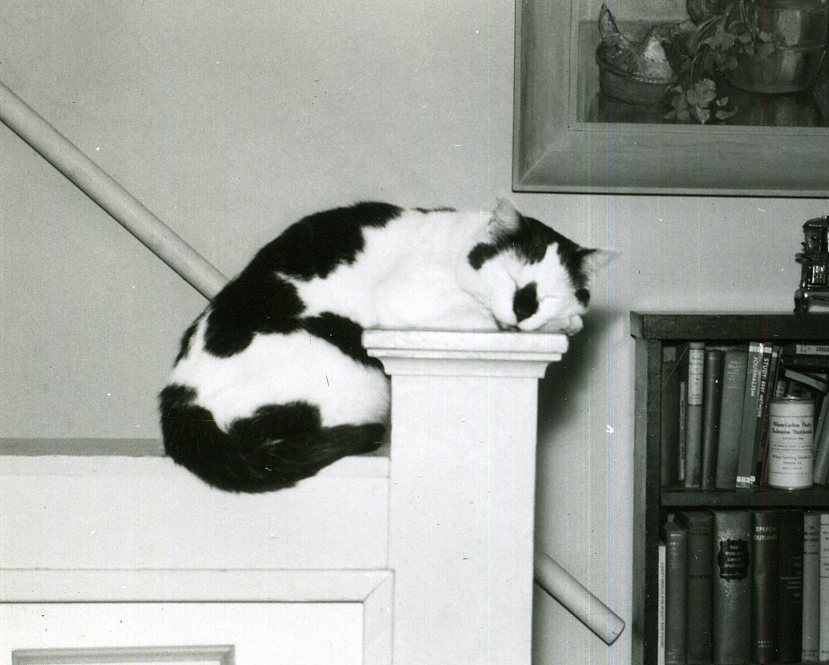 This was one of Willis' fav spots to sleep, so he could monitor everything by opening an eye. 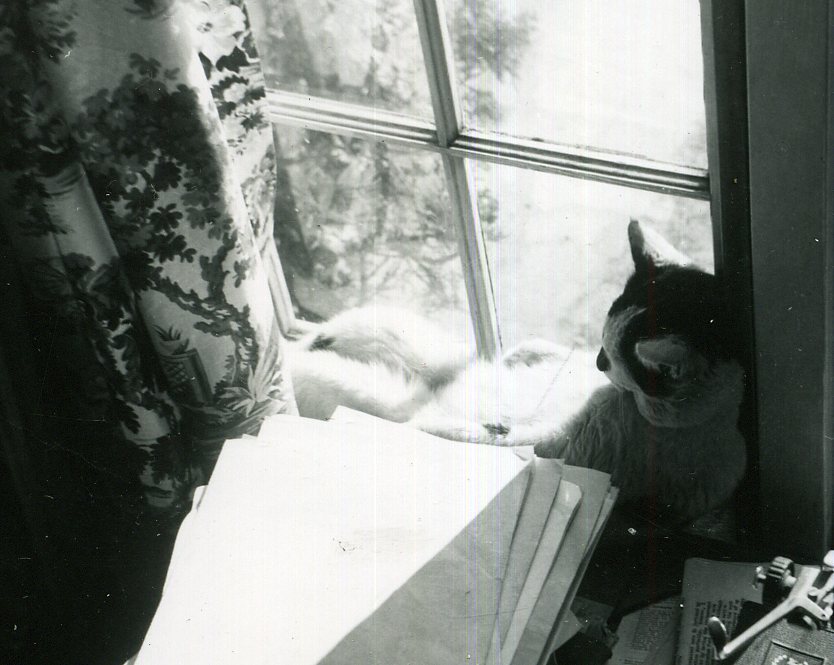 This was another favorite spot for naps, in the window of the "sun room" which doubled as my father's office.  There are a lot of photos of Willis because my father would get bored with writing up his reports about rural co-ops and scratching his head over his expense reimbursements.  Part of his job was taking photos of co-op events and there were sometimes tag ends of snaps to finish a roll.  Then he left for the next job.

When my brother was brain-damaged and had come back to stay with my mother and I -- who was NOT brain-damaged but newly dismissed from teaching (again) and sleeping in this same sunroom, but not on the windowsill -- my brother wanted me to leave.  His injury had been a hard blow to the forehead that destroyed what is called "executive function" and also empathy.  By this time Willis was long gone, but in an effort to make me go away, he told an involved story about how my mother had decided the cat should be euthanized and asked my father to take him to the vet, but he wanted to save money so he took the cat to a forest patch and shot it.  Incompetently, so that the old cat ran off wounded to die slowly and alone in the woods.  Since at this point I was fifty and penniless in a recession, I didn't leave until I got a job, which took eight months.  But by the time my mother died, his stories had made me far more ruthless about him.

To love is to be vulnerable, as well as burdened with responsibility for others.  We were not a huggy family.  We took obligation very seriously indeed.  Through high school I didn't date or I might easily have found human intimacy.  But Willis wanted into the house at 5AM every day and meowed under my window, knowing that I would come down and let him in.  Then he went straight to my bed.  In those days I had made myself flannel nightgowns that went up to my ears and down to my toes, which was an advantage with a wet tomcat stretched out against me.  When I left for college, Willis stayed behind.  In those years I was all mind and emotion, but not physical.

In Browning with Bob Scriver physical love took over.  There were not just cats, but also bobcats, foxes, horses, dogs, badgers, gophers, eagles --  all sleeping in a big mammal pile at night.  Except for the horse or the eagle, of course.  The eagle would accept intimacy from Bob -- not sexual but petting and nibbling fondness.  For a decade everything came together in a saturated fusion of ideas and bodies. 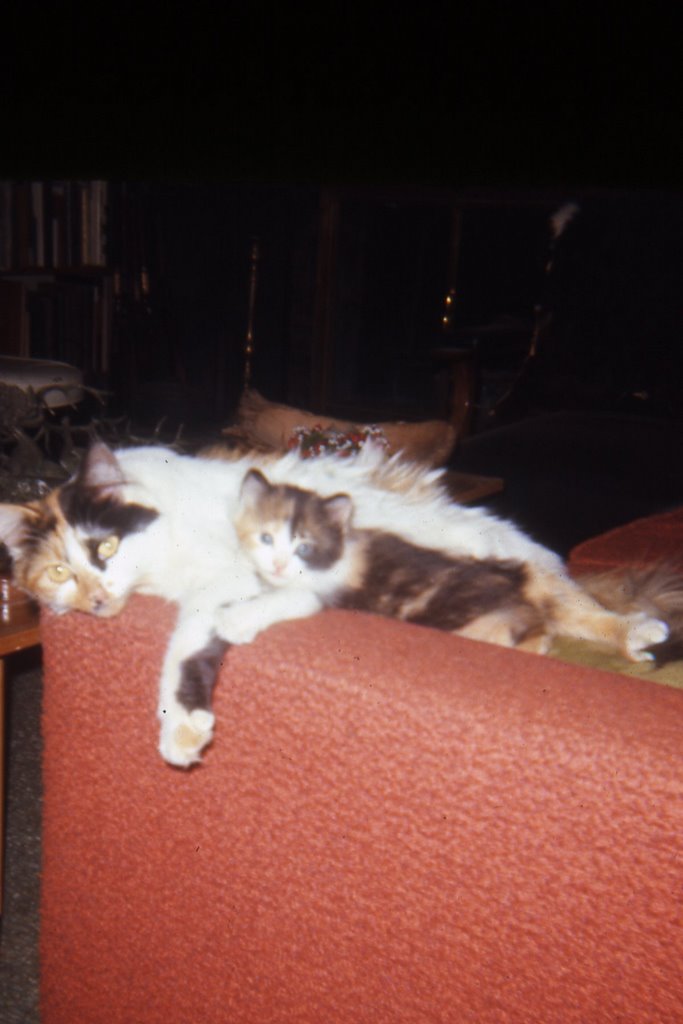 There were always mother cats because that's how the wild babies survived, but they usually managed to produce kittens of their own as well.

Animal control meant a steady torrent of animals, the biggest cat being Jamalya the young lioness, but she didn't tolerate petting.  The ministry meant no cats, no lovers.  When I left ministry, a cat named "Killer" came with me.  She could get out by leaping through the bathroom window onto the little roof over the alley entrance, but coming back in would have been a problem, except for a Japanese cocaine dealer who lived across the hall.  When he returned home at 2AM or so, Killer came into the building with him and he knocked on my door for her.

When I arrived in Valier, I was catless and planned to stay that way, but then I started a teaching job in Cut Bank, so I thought I could afford two kittens:  Squibs and Crackers.  The job lasted only months.  As the MEA union rep advised me, I will never be tolerated as a teacher in any small town.  Too much of a free thinker.  Except sexually, where I will think about and write about anything, but do nothing.  Anyway, a decade later, the two cats are still here.  Most of the photos of them are on the bed because that's when they hold still. 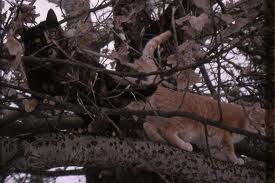 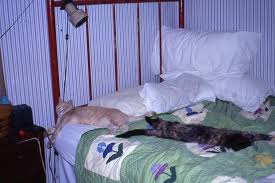 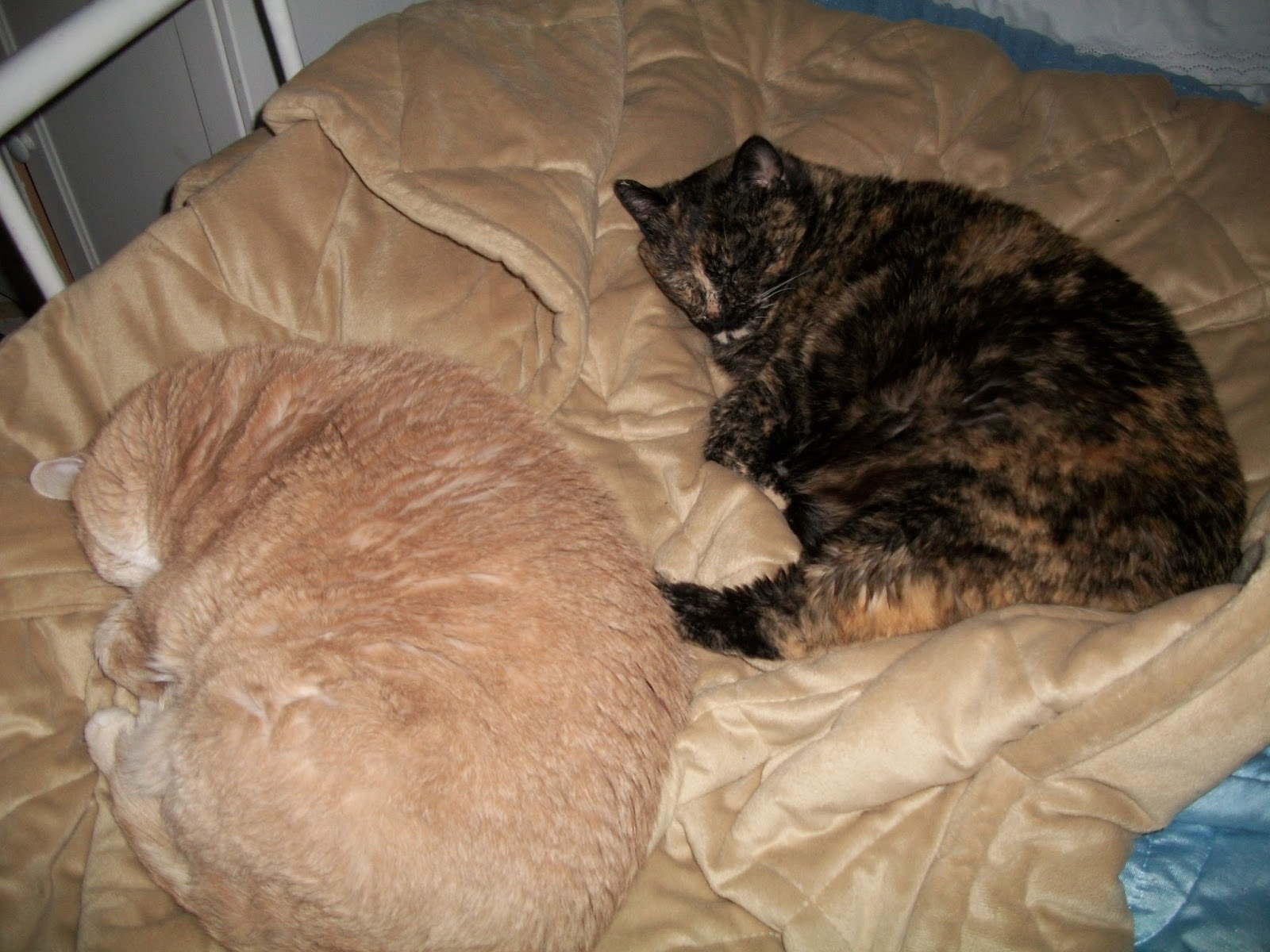 Last fall a feral "queen" cat managed to produce three kittens in my back building.  I immediately set up a live trap, but ran into problems.  The biggest is that they only were fooled by the trap once.  After that they just wouldn't go in.  The next is what to do with them once they are trapped.  They are far too spooky to be pets -- farm cats maybe.  But this area is totally saturated with farm cats, even though the coyotes pick them off.  So they have grown up in the backyard.  I provided a padded dog house in the back garage, but they much prefer the holes under the building.  Some people spay and release, but that costs money if only for driving to the vet.  Two are toms, the little gray and the big white and caramel.  The mother and the female are calico. 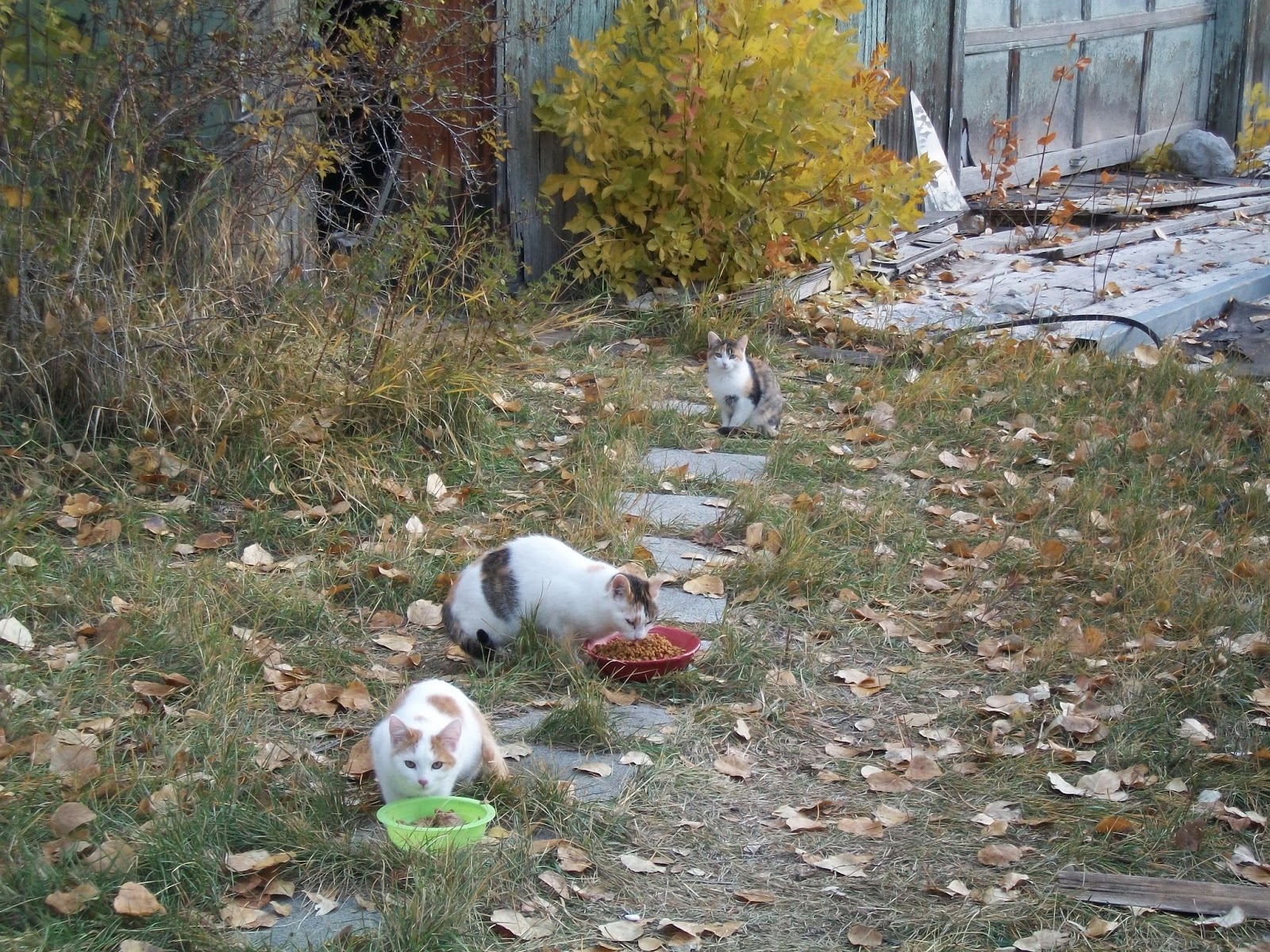 The cat path in fall. 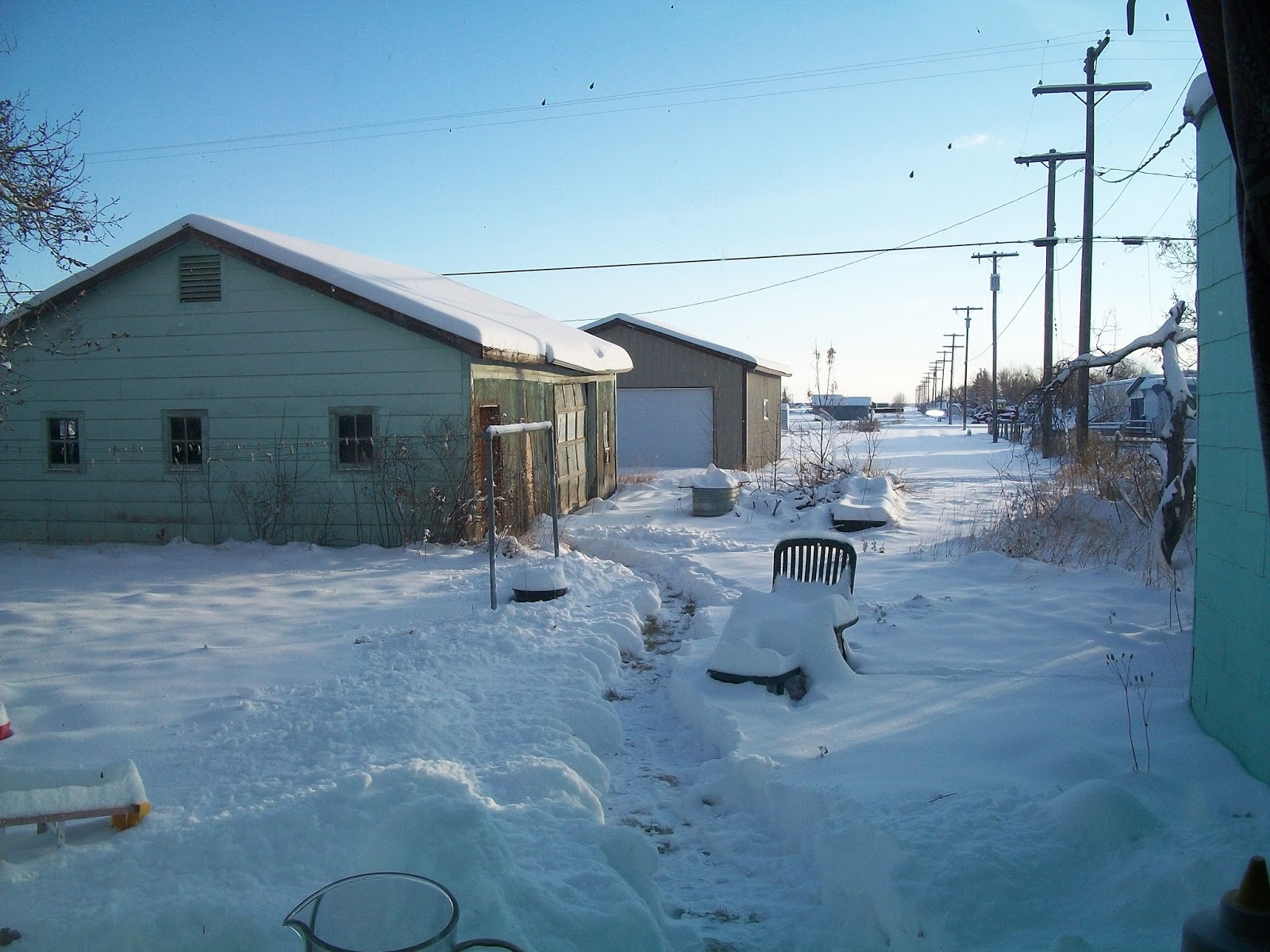 The cat path in winter. 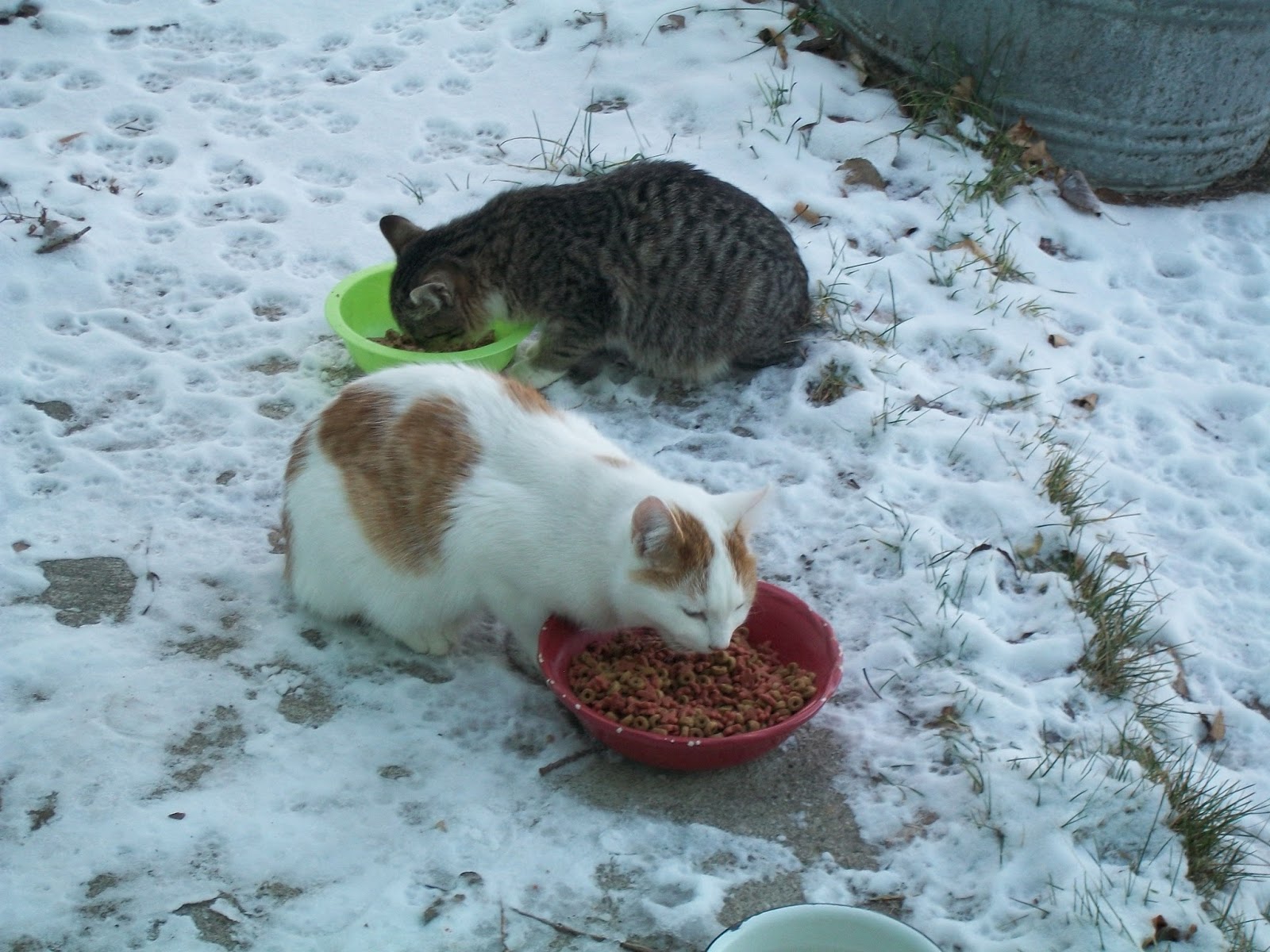 The cats indoors stick around close to me and if they don't, I go looking for them.  But the feral cats seem to have at least one other burrow down the street.  Once in a while they fail to show up for feeding time and then I feel bereft, even though that's the desired outcome, isn't it?  It's not even a physical relationship since they don't let me touch them -- just an economic one.

My frizzly hair has gone white and thin now.  I cut it myself, having lost patience with trying to grow it out.  But I still sleep with cats, admire the little flower faces and Valentine noses of the feral family when they cluster under the window to wait for food.  The neighbors speak of them as "Mary's cats."  They wonder why I have never become a mother.