"ACCUSED" -- maybe convicted and maybe not

At this url is an amazing episode in an ongoing series written and co-written by Jimmy McGovern, one of the most gifted and insightful of the Brit crime serieses that come out of Manchester.  It is one of dozens of stories about "ordinary" people, this one about a mild English professor of Romantic Poetry (leaning on "The Lady of Shalott", a fav of "Anne of Green Gables") and a little corny, out of fashion.  https://acorn.tv/accused/series2/tracies-story/  McGovern was the inspired author of the "Cracker" series, about a man who exceeds all boundaries, even that of size, while stoking a joy in life that makes him irresistible. 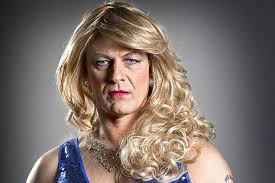 In a reverse Superman premise, the professor on his own time is what is called "a transvestite" which he himself calls -- when it is noted how unconvincing he is as a woman -- that he is  actually "a man's notion of what a woman is like."  Long blonde hair, blood red nails, high heels, long legs.  This is enacted brilliantly by Sean Bean, about as masculine as anyone this side of a bull buffalo.

The other side of this confused couple is played by Stephen Graham, another of the fine BBC repertory company.  If it were not for the excellence of these people and the wide boundaries of the genre, this could not have been so meaningful a story.  "Sex" and gender are braided together most of the time, and often contradict each other, but the complexities of human identity and the underwater monsters of culture that drown whomever they catch, can be at least described, as they are here, for people who are not gripped by their own emotional obsessions.

The plot is simple.  The two men meet when Stephen Graham is driving taxi.  He is the one who is crossing the boundaries in a toxic and secretive way, by using Bean's character to be his sexual partner while his conventional het wife is pregnant.  He becomes less and less able to handle his idea that it's not cheating, not socially unacceptable, until he finally throws his own transgression onto his innocent wife and kills her.  Bean's character is at first wary, then overjoyed to find someone to accepts this alter ego he has invented.  Then realizes who this bland-seeming taxi-driver really is.  He barely escapes.

Usually this material is exploited for shock value and pictured as sordid, dirty, and impoverished.  That's not the case here.  Everyone has a job with adequate pay.  When the Bean character reaches out to his partner's actual wife, the two appreciate each other and meet as equals.  The wife is a make-up artist who helps Bean be more feminine.  This is before the Trannie surgical approach and the social change that would allow a college professor to be sexually fluid, or at least double.

When the feeling of being "loved" as a woman wakes him up as a teacher, his students also wake up to his new energy.  Knowing and liking the wife makes her murder much more horrifying, her innocence established.  She is not a reprehensible nagging or punishing figure who would push an unstable person into going outside guidelines.  This aligns with McGovern's author principle that love of life is so valuable.

Booze figures largely in the story as it almost always does in crime tales where people go outside their boundaries, as is encouraged by alcohol.  If they were users of "weed", violence would be much less likely.  But there is also the caution against leaving conventions like marriage, like gender assignments.  Even the "English professor" day-role is prescribed by our stereotypical ideas about what such a person should be like.  Today they might be more likely a young black woman and the "poetry" choices would be quite different.

Much of this story -- like the theme of this whole series -- is about the inevitable conflict of justice and law.  As time passes and the "ecology" of society changes, the two systems of how to behave get out of sync, leading to terrible economic restrictions and conflicting kinds of behavior.  At the end of this show plot, the English professor is allowed to continue with his imitation female pretense joyfully and his cohort -- wakened by his trial for murder and having attended the trial -- welcomes him to their fav hangout.  He has a new sense of belonging somewhere.

Tracie's costuming, related to cosplay, has that awkward cheap glam feeling of someone who is being a bit phony, maybe on purpose if not consciously.  Leopard prints, imitation fur, costume jewelry pearls.  Likewise the long blonde hair, so ubiquitous among the set who define themselves as "arm candy."  Few studs are bold enough to choose escorts who are black or bald or both.  Mostly they're rock stars used to trashing any boundary they can find, which makes the rest of us timid souls rejoice so long as we're only watching.


The rest of the stories in this series (on Acorn.com) are equally challenging:  two very best female friends when one's son kills the son of the other; a woman whose beloved husband's killer turns out to be his mortician.  They are "what-if" but possible and no doubt really happen in ordinary life.  The solutions, apart from compassion and understanding, are not definite.  Sometimes the court system is unjust and other times it ends in a good result.  The art of the story is letting us unravel what happened in a suspenseful but inevitable way.  It's not about the cops.

it is also a very Brit series about the problems with Rule of Law, hierarchical roles, and class systems -- not just high and low, but who's supposed to do what, even if you don't fit.  The true frontier is always in the individual human.
Posted by Mary Strachan Scriver at 12:39 AM