Joking metaphors are made comparing checkers (them) and chess (us) or three-dimensional chess (who?).  Another saying is "he's bringing a gun to a knife fight." But that's weapons. Am I writing as a weapon? Possibly.  But now I want to consider writing/thinking as a kind of "trip", not psychedelic.  Is what I'm doing either "orienteering" or "parcours"?  Orienteering is traditionally following a trail, a matter of understanding clues.  Parcours is inventing a way through a dangerous environment.

The planet has been changed by us, but was already changing anyway.  Volcanoes, droughts, variations in the mega-patterns of jet streams and ocean gyres can wipe out whole populations, or can support ag enough to allow a few to feed the many. For a few centuries. Gaea always has the last word, but -- as they say -- it is how the humans respond that makes the difference about who and how many survive.  We have very little power and even less awareness about this.

The idea of Nations is changing.  This involves things like boundaries, money, ownership, crime, war . . . so much.  It is challenged by the internet which wraps the globe in words and images, music and food which are cultural idea-carriers that encourage exchange, by suffering people forced to migrate in order to survive, and by the overcomplexification of the Rule of Law and hierarchies that used to save us but now seem oppressive.  Strangely they have no relationship to virtue, so a madman can be at the top of the conventional pyramid with no way to bag him and carry him outta there.  Any effort to level the pyramid is labeled socialism in the way we used to speak of communism.

There's no real way I and many others can escape the assumptions of a particiular stream of culture that evidently began millennia ago with horse people on the plateaus of northern Eurasia and washed south over the population that had bazillions of years earlier migrated up through the Mediterranean from Africa.  Nor do we have much awareness of the Asian, the South American, the Australian, ways of organizing life until the mercantile silk roads and big sailing ships convinced us that sales and resources were the key to Empire.

Empire is the practice of coming in over the top of a population because of the power of militarized kingdoms and the industrial complex that has now progressed to predator drones controlled by young people in a darkened Indiana room, killing with no risk.  No longer do we have the luxury of organizations that can restore order or at least protect the vulnerable, groups like the Red Cross, or monastics who in their friar aspect could go among us respected and without damage.  Today hospitals are bombed and all religious are suspected and convicted of sexual transgressions against the vulnerable.  Churches are empire builders.

"Professionals" who were once self-policing and committed to high ideals that qualified them for respect, are now corrupt, intent on finding exceptions to the rules.  The binaries of reason have become the double-binds of justice vs. law, healing vs. authority, knowledge vs. inability to give up old ideas that don't fit anymore.  Money is all that matters, to the point of accepting the idea that debt is worthwhile because it is an investment that will guarantee a comfortable life.  It only crushes people.

Somehow we've been bamboozled into the idea that a group of investors can control a corporation owned by a few super-wealthy people with special hidden knowledge and connections.  Co-ops fail because no one had time to participate in them -- they are BUILT on participation.  But no one has time.

Those who have big money spend it on big houses with glass walls and vast terrazzo floors, so that it's necessary to invest in industrial machines for cleaning them and a small army of people to run the machines -- plus the people who maintain the landscape and the pool.  They have fabulous kitchens but always eat out, and state-of-the-art computers and vid screens in every room, even suspended over the bathtub, but can't run them beyond operating the on/off button.

At the bottom are people starving, camping on sidewalks, dying of curable diseases and loneliness.

If orienteering is a game in which one follows a trail left by someone else who has gone before, following compass points or scraps of paper, usually in the country, and if parcours is a game in a which those who are able travel athletically and daringly over urban landscapes often at rooftop level and at risk, then which is writing?

I say both, unless one is just picking up repetitious and half-digested ideas for sale, another money corruption of media.  Even the so-called elite websites like Edge, Aeon, or Google are still based on the same prejudices of those who control writers: editors, owners, agents.  Over and over the news is told that dogs can communicate with their eyes because of evolved muscles, along with wry comments about people who invest their emotional lives in pets.

This time in the history of the world was foretold.  We CAN fly now with bat suits, para-sails, and jet assists.  Women can escape the tyranny of child-bearing.  There is no draft.  Etc. etc.  We expected to be overwhelmed by the numbers of people and are surprised by the pain of shrinking, esp. since surviving people are so different.  Not just immigrants with a new culture, but also our own children -- raised in what we thought were enlightened and adapted ways -- ignore parents and depend on each other.

We didn't expect that this changing world would work -- they could figure out what to do.  It's just different and sometimes the experiments don't work.  Households are trying to get off the grid.  Authorities are not respected and are carefully scrutinized, often revealing some majorly compromising stuff.

Most of all, no one imagined a demented President.  (Except Putin, Bannon, and the cabal of evildoers who pretend to be cabinet members, though they can barely get their aging bottoms into the chairs around the table of flattery and ignorance.)  I keep having this vision of the palace guard of Marines in the White House taking a big bag into the Oval Office, stuffing Trump into it, and carting him off the best hospital. 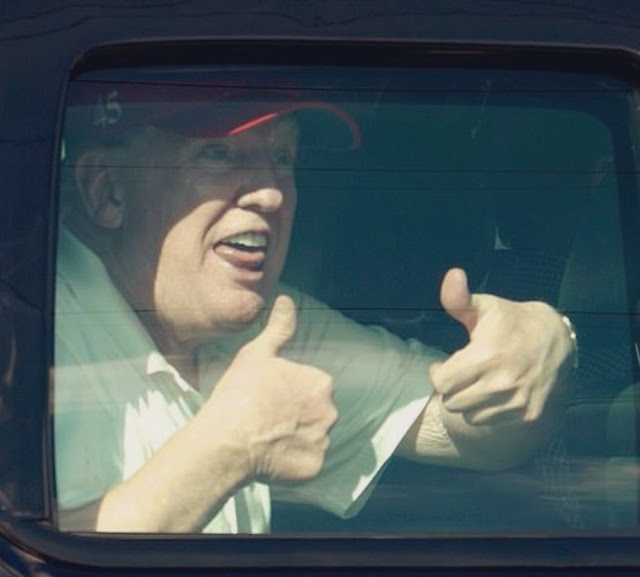 So -- clearly this is parcours that I'm doing when I sit here.  It gets harder and harder to jump the gaps between shelters.
Posted by Mary Strachan Scriver at 6:44 AM