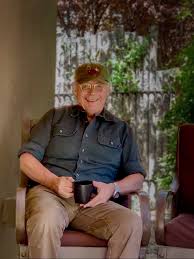 Nicholas was born August 11, 1949, to Hugh Thomas Vrooman and Marjorie Joy Curchin in Rochester, New York. He was the third of six children. When Nicholas was 10, his family moved to Schenectady, New York, where Nicholas’ love of history, community, families, research, and storytelling began. Nicholas had a wonderfully adventurous childhood with his family in Schenectady and summers in the Adirondacks.

In 1975 Nicholas traveled from New Mexico to Montana. There he took a job as a ranch hand for Bert and Darlene Mannix in the Helmville Valley. He loved his time there immersing himself in the cultural traditions of the Mannix family, ranch work, and the valley, including the little-known history of the region’s Métis people.

Becoming Montana’s second State Folklorist in 1989, Nicholas worked with traditional and cultural arts and folkways across Montana. Nicholas saw himself professionally as a folklorist leading the Montana Arts Council to deepen its involvement with traditional arts.

In 2010, Nicholas returned to school receiving his doctorate in history from the University of Montana, with the dissertation, “Infinity Nation: The Metis in North American History.”
Perhaps his greatest work, Nicholas researched and wrote "The Whole Country was One Robe: The Little Shell Tribe’s America." One reviewer wrote, “This is a wonderful, intelligent, extremely well-written and thought-out history of a people whose past was obscure.”

His latest book, "Infinity Nation: New Peoples, the Medicine Line, and American Prejudice" will be published in 2020
.
Nicholas is considered one the West’s most passionate and important folklorists, historians, and creative spirits, always larger than life, immensely generous with his knowledge, Nicholas made an incalculable contribution to our understanding of the diversity and complexity of cultural life on the Northern Plains. His absence will be felt by his extended family and countless friends and colleagues in the United States and Canada.

A Celebration of Nicholas’ Life will be held at 1 p.m. Thursday, July 18, 2019, at ASW Funeral Home, 3750 N. Montana Ave., Helena, Montana. A reception will follow in the social hall of the funeral home. Please visit www.aswfuneralhome.com to offer the family a condolence or share a memory of Nicholas.

--- HELENA INDEPENDENT RECORD
Posted by Mary Strachan Scriver at 11:50 AM