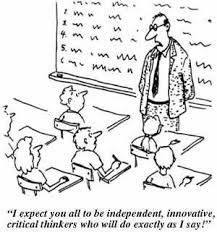 At one time (as late as the Sixties) English was the most basic element of a curriculum and it was even suggested that ALL high school teachers should act as teachers of English -- that is, in science, history and even math classes part of the grade ought to be on the quality of the writing.  Then the subject of English self-destructed, taking some students and most teachers with it.

The first explosion was the realization that science, history and math teachers had lousy writing skills.  Then, that the English teachers were becoming less and less trained.  They were boneheads with delusions. 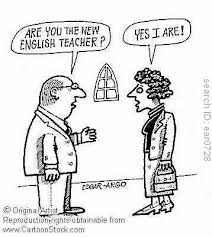 Then an ideological megabomb challenged the arrogant domination by high level English skills and the racist idea of English as the prime language and the right of societies to impose such values on students.  This came from INSIDE the humanities studies of colleges via the French Algerians who had nothing to lose if they spoke the truth. 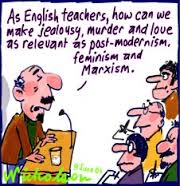 More subtly, the English teachers had managed to conflate proper usage with class: low-class people use vernacular.  The best people (from England or Massachusetts or Shakespeare) have snob accents and huge multi-syllabic vocabularies.  If someone uses slang, they are low-class and if the slang is really profane or obscene, the speaker is probably criminal.  This idea merged with race stigma when African-Americans came up to the northern mega-cities speaking the soft accent of the Southern whites plus a kind of pidgin vocabulary of their own.  Ghetto talk.  Now defiantly celebrated in music. 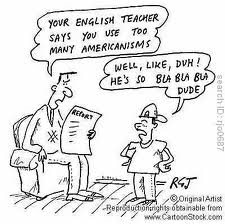 Grammar has not been taught to the level where it becomes useful.  Knowing the parts of speech is only the beginning, like learning the alphabet or how to count.  It is not until one gets to phrases and how they connect to each other, how they can be converted from one to the other (participle to prepositional phrase, subordinate clause to gerund, and so on), that grammar is useful.  Even then it is only useful in service to clarity and parsimony: saying as much as possible gracefully but in as few words as possible without confusion.  (If only the French Algerians had been better at this.)

Another hidden bomb was English education as a curricular/canonical/required check list of books read and the whole idea that one book is better than another without even the teachers quite knowing why -- only that the idea was taught to them.  I’m not talking about whether high school kids should read Shakespeare instead of Judy Blume and Heavy Metal, but that the value is in what you get out of it, not how many you have checked off like a bird-spotting life list.  While I’m at it, you’ve probably noticed that illustrated books and comix are stigmatized and that reading “chapter books” with no pictures is considered a child’s milestone.  How to read pictures -- whether drawn or photographed -- is not taught, and yet the vocabulary of moving images is probably more important in electronic world reconciliation and sharing than any print has ever been.

In American schools English is seen as a subject only in print and one language.  Concepts of meta-language -- why the word for tree has different implications in different languages, let alone the word for love or parenthood -- are never taught.  English is the fountainhead of certainty and domination.  It becomes a moral concept: from “is to ought,” from most-spoken to must-speak.  The language of the King James Bible obsolete locutions are seen as God’s language though the accurate historical languages were Hebrew or Greek or Aramaic and often improperly translated.

We are a country of immigrants that forced even the pre-existing natives to conform to the British Empire.  English as both a language and a subject is that in which the student must qualify as an applicant, not as a way of acquiring communication skills subject to experiment, contradiction, local experience, human relationship, story and simple glee in sound.

Then the gender grenade.  English is a girl language and men who teach English must somehow prove their virility by being blunt and simple, but girls are not allowed to talk that way.  Women are girls; boys are men.  Therefore, since English teachers are most often female, male students try to prove their gender by defiance and acting up.

These assumptions and practices are indeed small disruptive and destructive bombs along the way in high school, but there is one more that is the most life-destroying of all: the idea that writing a splendid book will make a person rich and famous, prove that the author was a hero in disguise and relieve all the author’s angst with the therapeutic gift of revelation.  If the writer is from the lower classes, possibly a “less human” race, the best-selling (it is assumed sales will indicate quality) book will take on the cachet of a “talking dog.” (Isn’t it remarkable that a formerly addicted black high school dropout with a criminal record can even grip a pencil!!  Think what such an uninhibited natural person must be like in bed!!)  The bar is graciously lowered by effete upperclass grad school people whose sensitive humanity allows them to appreciate such efforts (and fantasize).  Which defeats the whole purpose of the struggling autodidact intending to prove he (always he) can write as well as those snobs with their expensive laptops.

Every author with integrity wants to know the true value of his or her book.  Lulu.com will now evaluate your self-published book for a small fee.  What they are really doing is searching the grass for material worth the time and money of a publishing house and making the authors pay for it themselves.  (We’re beginning to catch on.)  But the real truth is that every book is a creature of a time and place and its value is confined to those terms.  What is world-shaking to one audience is banal to another; what was crucial when Harold Bloom was educated is irrelevant now.  What some anonymous “reader” thinks is a good book is not likely to be helpful.

It is possible to go spelunking through history, trying to understand what it was that made the groundlings roar with appreciation of Shakespeare, but why should a modern sixteen-year-old care?  If the story is rewritten to feature songs and dances performed by gangs in Manhattan, is it Shakespeare anymore?  Or just a reputation, a label?

“English” -- so misleadingly named -- is really anthropological communication and ought to be taught as such.  It should include speech and hearing, sign talk, translation, and always the search for assumptions.  This means a whole generation of English teachers will have to be retrained or driven out.  Part of retraining will have to be “how to read” which is supposed to be taught in the beginning but isn’t, which explains many troubles.  Distinct but complex brain skills are involved, unique from person to person depending on the architecture their experience has created in the neurons whose webs form their identities.

So there you have it:  forget “English.”  This subject should be called “the Connectome,” concerned with building up the skill and content of metaphor, story, context, and all the various human communication means including computer language -- even txting.  As well, the school should evaluate and develop the fifty or a hundred brain functions that go into interpreting print.  In a way it’s a good thing that the past version of “English” is so badly taught.  It leaves room in young brains for the future. 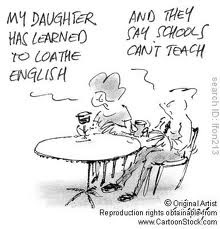 Posted by Mary Strachan Scriver at 12:07 AM