I signed up with TED TALKS to receive a video each day, their choice.  This one came today:
http://www.ted.com/talks/lesley_hazleton_the_doubt_essential_to_faith.html?utm_source=newsletter_daily&utm_campaign=daily&utm_medium=email&utm_content=image__2013-06-24 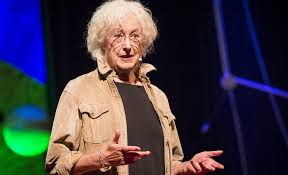 The content, the delivery, the wardrobe and the age of this woman impressed me greatly.  I think I may have found another role model.  Here’s a bit from her blog:
http://accidentaltheologist.com/2012/02/03/hazleton-on-hitchens/
Lesley Hazleton lives on a Seattle houseboat these days, though she’s educationally and demographically of Jewish English origin.  She’s thinner than me, six years younger, and has (marginally) better hair.  Her education hashmarks are B.A. Manchester University, M.A. Hebrew University of Jerusalem, both degrees in psych -- roughly equal to mine, but quite different.  In fact, our theological stances are similar but not the same.  (I am technically a-theist but not secular.)  She is, as one might expect, much more attentive to status.  In fact, there is a curious echo of a very relaxed Maggie Thatcher.  (I’m more Margaret Mead.)   But the real difference doesn’t come out until her talk about Christopher Hitchens (in which she relishes the “spanking” Maggie gives Chris).  I think Maggie would love the thigh-high boots that Hazleton wears sometimes.

In equating Hitchens with an English school boy who is “bad” to avoid being bored and relishes even pain as a relief from that, she neglects the same thing that Hitchens overlooked in Mother Teresa when he took her to task for her love of status and money at the expense of the people she was supposed to be saving.  Hazleton declines to admit that Hitch was living at the edge of the abyss, which he in turn didn’t acknowledge was deep in the psyche of Mother Theresa.  (Otherwise, why would he pay any attention to her at all?) This is where Mary Johnson enlightens us, though she herself is not easily sucked into the vortex, even being in thrall to Mother Teresa for years.  Or maybe she’s just willing to accept a lifeline thrown her by another human being instead of insisting on the more stellar angels.  Or maybe she’s a person who can have faith.  Not all of us are born for certainty.

I was only in Seattle (Kirkland is really part of the mega-city) for one year, but it was glorious.  My ministry there was an interim, meant to persuade the congregation away from their departed previous minister, whom they loved.  I was prevented by denominational rules from staying longer.  Peter Raible, with a certain amount of generosity towards Kirkland since the departing minister took Peter’s wife with him, remarked that if I’d been allowed to stay on in Kirkland, I would never have left the ministry.   There’s truth to that, though it doesn’t really take into account my even deeper attachment to the prairie.  Not the people -- the land.

So where I connect best with Hazleton is her intense nature mysticism.  Like her, I turned out to “have no affinity for organized religion.”  Like her, I enjoy being at the lectern and was good at it, though by now my voice is gone.  Unlike her or Mother Teresa or Christopher Hitchens or even Mary Johnson, I am anti-status, anti-class, and even anti-prosperity.  Like Tim, who also shares nature mysticism but does not find it salvific.  Just therapeutic.

There are ancient tendencies in religion.  I am the anchorite, the hermit, the solitary.  Tim is not -- he believes in community and loves his monastery and its young residents while relishing the protective separation from the world.  They do not copy manuscripts -- they make video.  I get the impression that Johnson is like Tim but Hazleton is like me.

Hazleton can be excused for ennobling the gut-squeezing de-humanizing terror of holocaust because of being Jewish, whose singling out to their minds surpasses all others in its cruelty and numbers.  This is pretty much inarguable because of the industrial cold-bloodedness of it.  My own inherited family historical holocaust was the highland clearances when the British landowners simply dumped out their tenants so that they could raise more sheep to make more money or the Irish potato famine in which a marginal people were given a push into starvation by destruction of their key food source.  This has given me a special affinity for the prairie Native Americans who were also the victims of profitable land clearance and convenient disease.

I would argue that considering any one holocaust an entitlement and enlightenment superior to any other is pride that resists compassion.  The prairie tribes have had to put up with white triumphalism about white “right” to seize the West.  The slaughter of those people is romanticized -- or in a reverse imprint, it is alignment with the Indians made romantic.  Neo-nazis try to do that kind of evil bragging about destroying Jews but it is not admired.  In France and other countries forbidden by law.  No one goes to party-auctions to buy paintings of Nazi’s slaughtering Jewish families, but they do exactly that when it comes to the Plains Indians.  Somehow the stigma of being Jewish is countered and erased by the stigma of being a Nazi.  Tim points out the holocaust against stigmatized gays that is enforced by HIV-AIDS.  Only recently have the fundamentalist bullies who hate gays been resisted.

Hazleton writes on her blog eloquently about the “high” of being a TED talk speaker.  The strategy of TED is to provide an audience of high status and achievement, then to cherry pick speakers who will say things that this audience will accept and appreciate.  This is a prejudice that serves my interests.  (I don’t expect Tim to be invited and though he would have accepted once, it’s too late now.  But he has done the same thing: found people who are sympathetic and enlisted them.  The scribes and the pharisees have taken their revenge on him, assisted by disease.) Hazleton may be more universal than she thinks.

For many years Hazleton used her boots on the ground of the Middle East as a foreign correspondent.  She’s not an academic book theologian, but she can bring careful research to bear on the sensory reality of life.  It’s frustrating that when I first called up the search engine to find her, another video speaking against her was on the google list, but when I went back to find it, the google algorithm had removed it -- because part of their formula is the assumption that I would only be interested in what I approve of.  This is demonic.  It serves the vortex.

Hazleton is not censorious, but I suspect she does not suffer fools gladly.  Our shared mental location is on the boundary, close enough to observe closely but distant enough to see the big picture.  We’re “Sits in the Brush,” which is not comfortable because often it’s on the lip of the abyss, which cannot be seen into, only felt and smelled on the sucking wind.  I notice that one of her favorite artists is Anselm Keifer.

Each human has two opposing desires:  one is to be unique (that’s no one like ME!) and the other is to belong (where are my people?).  I’m not saying Hazleton is “my people,” but we’ve got some echo.
Posted by Mary Strachan Scriver at 12:02 AM

So when do we get the Mary Scriver TED Talk? And what would it be?