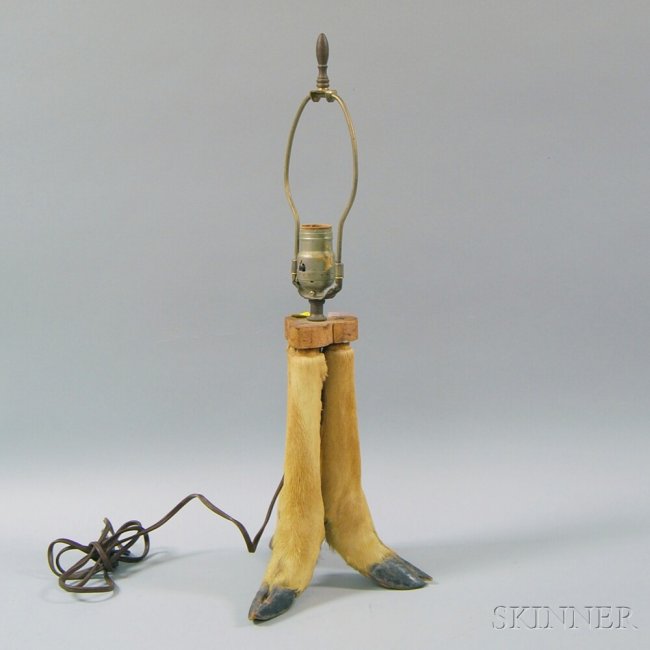 The signs on the outside of the building were faux lariat script, painted onto the stucco by Al Racine who had actually taken sign-painting classes.  It was corny because corny works with tourists, esp. the tourists in the Fifties when the Scriver Studio opened its door.  It was a taxidermy business -- how corny can you get?  (Not as corny as the recent retro craze for small animals imitating humans.)  There were lamps made from deer feet clustered or ashtrays made of buffalo feet or (ulp) coin purses made from various kinds of scrotums.  (Is that so different from a Native American artifact?  Like a water bag made from the skin of a newborn fawn?) 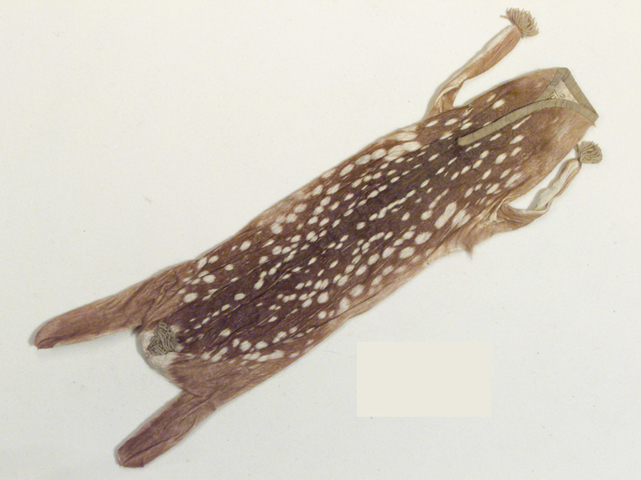 Actually, this is a rice bag from Minnesota.

Some of this stuff was in the front window, along with mounted snowy owls, spread-winged, and a giant head of Charlie Russell.  I was divided about it.  On the one hand it was, well, corny, and on the other hand it brought to mind one of my all-time fav books:  “Two Little Savages” by Ernest Thompson Seton.  Remember how Yan (which I pronounced like yam) lingered in front of the taxidermy shop window?  There was something English about it, that 19th century love of natural history, an innocent love of figuring out how things fit together before all that French philosophical stuff got into it. 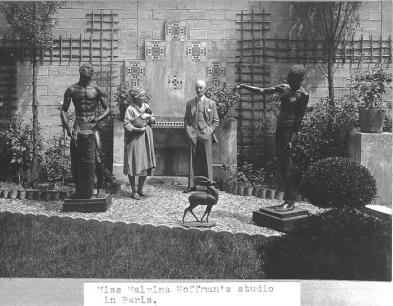 Hoffman and Stanley Field in Hoffman's Paris studio
The statue I chose for my acting project was the one on the right.

It was the week before school started and I had just arrived in town so I was still exploring.  The front door stood open.  No one was inside except Bob, through the Dutch door in the actual workshop, skinning a bobcat suspended from a hook.  At first I thought it was a monkey -- cats of all kinds are always so much skinnier and long than they look with their fur all fluffy.  It was relatively dark back in there, but Bob invited me in.  He went into tourist mode, meaning trying to sell me something.

But there was no one else coming in.  We settled into conversation and discovered a major overlap:  Malvina Hoffman and the Field Museum.  I had just graduated from Northwestern University where Alvina Krause used the Hall of Man anthropological portraits Hoffman had made as a sort of character bank.  Her acting students were expected to assume the posture of one of those people and “become” them.  The idea is that muscle tension, the attitudes and gestures of the limbs, the spine (always the spine) would reveal the inner life of these people.  (The portraits aren’t there anymore -- they’re considered politically incorrect.)  Bob and I both knew the statues well enough to talk about them individually.  Hoffman's book “Sculpture Inside and Out,” (yes, my bio of Bob was an homage to her), was his basic text as he learned sculpture.  Now that my eyes adjusted to the dimness, I saw sculpture mixed with taxidermy artifacts like eyes or tongues or papier maché bodies. 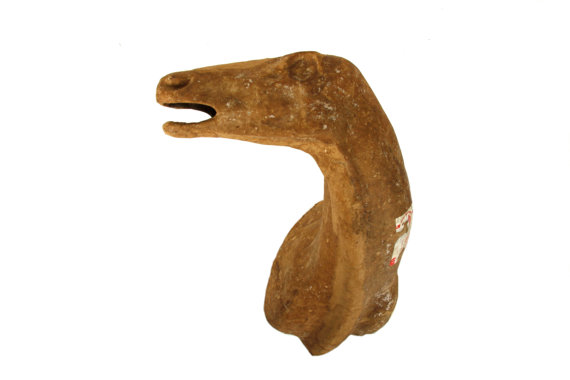 Taxidermy on the level Bob was practicing is essentially sculpture.  Far from being “stuffed” as small animals may be, the big game animals were papier maché hollow figures with the hide tanned and glued onto it.  For his first really big mount, the figure was bought from Jonas Brothers.  The actual bear, which was shot near Chief Mountain, was too massive to pack out entirely, though he brought out the limbs.  The hide alone probably weighed several hundred pounds.  Generations of people stood under the claws pretending to be attacked.  No one ever stole the claws, which were worth a lot of money, but now and then someone stole the tongue, pink rubber from Jonas Brothers.

What distinguished Bob’s work was his ability to make his own molds for the papier maché shell from the actual body of the creature.  He was able to visualize the living animal -- the specific animal -- because he collected the game animals in the museum himself, even planning where to shoot them so the hide would be in good shape.  When he worked on them, like the actor imitating the person portrayed by Malvina Hoffman, he took on their poses in his own muscles, slipping into their minds, melding in what it would probably not be exaggerating to say a “spiritual” way. 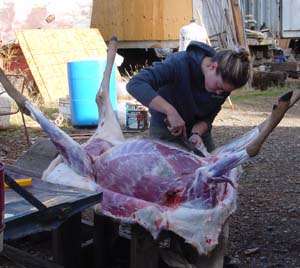 Another of the parts of Bob’s estate that was not understood by his lawyer or widow was the huge molds for the buffalo, the moose, and so on.  Made of plaster and rebar, they were stored on the ranch in an old motel that had used to be across the street from the Museum.  He had some vague idea of using the rooms for guests, but they turned out to be insulated with asbestos-contaminated vermiculite.  In fact, we used great quantities of vermiculite in packing and to mix with plaster to make it lighter.  We never thought of masks.  I was interested to read the newest research which is that the kind of asbestos involved is capable of triggering rheumatism and arthritis in later years.  What working stiff in Montana doesn’t ache and cough?

There was not a lot of blood -- almost none.  The muscle bunches of mammals are sheathed in a silvery membrane, arranged in a logic of pulleys, each one paired with its opposite.  Game animals are field-dressed to cool them as quickly as possible and there is blood connected with that when the organs are spilled out onto grass or snow.  As a sideline, he also bought fur from trappers. 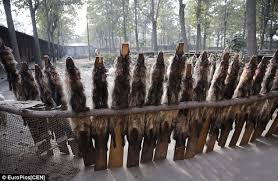 Beaver hides are stretched in hoops and end up round.
Other animal hides are dried on board scabbards.

Taxi-dermy means toxic-skin, but Bob used borax on the bird mounts instead of arsenic, which has a bad effect on tissues.  The tanned hides of mammals were cured with salt and then mild acid bath, soaking in a huge wooden vat in the basement of the workshop.  I’m unclear whether it had been a water reservoir or for fermenting wine, but it was maybe twenty feet across.  Next to it was the walk-in freezer from a grocery or meat store, always full.  In winter when the temp went down below zero, we took out the contents and sorted them on the unheated museum floor, cleaned the freezer, rarely threw anything away.  This always made the temp rise above freezing.

When a pet died, it ended up in the freezer because Bob always said he wanted to make a sculpture model, which he would have done using measurements.  He intended to but never did made any portraits of them.  The real reason was that he had a hard time parting with anything -- couldn’t bear to either bury the body or just take it to the dump.  His beloved “Gunnysack,” (“Gunsmoke”) his half-Arabian white horse, was buried out at the ranch and he asked to be buried alongside. 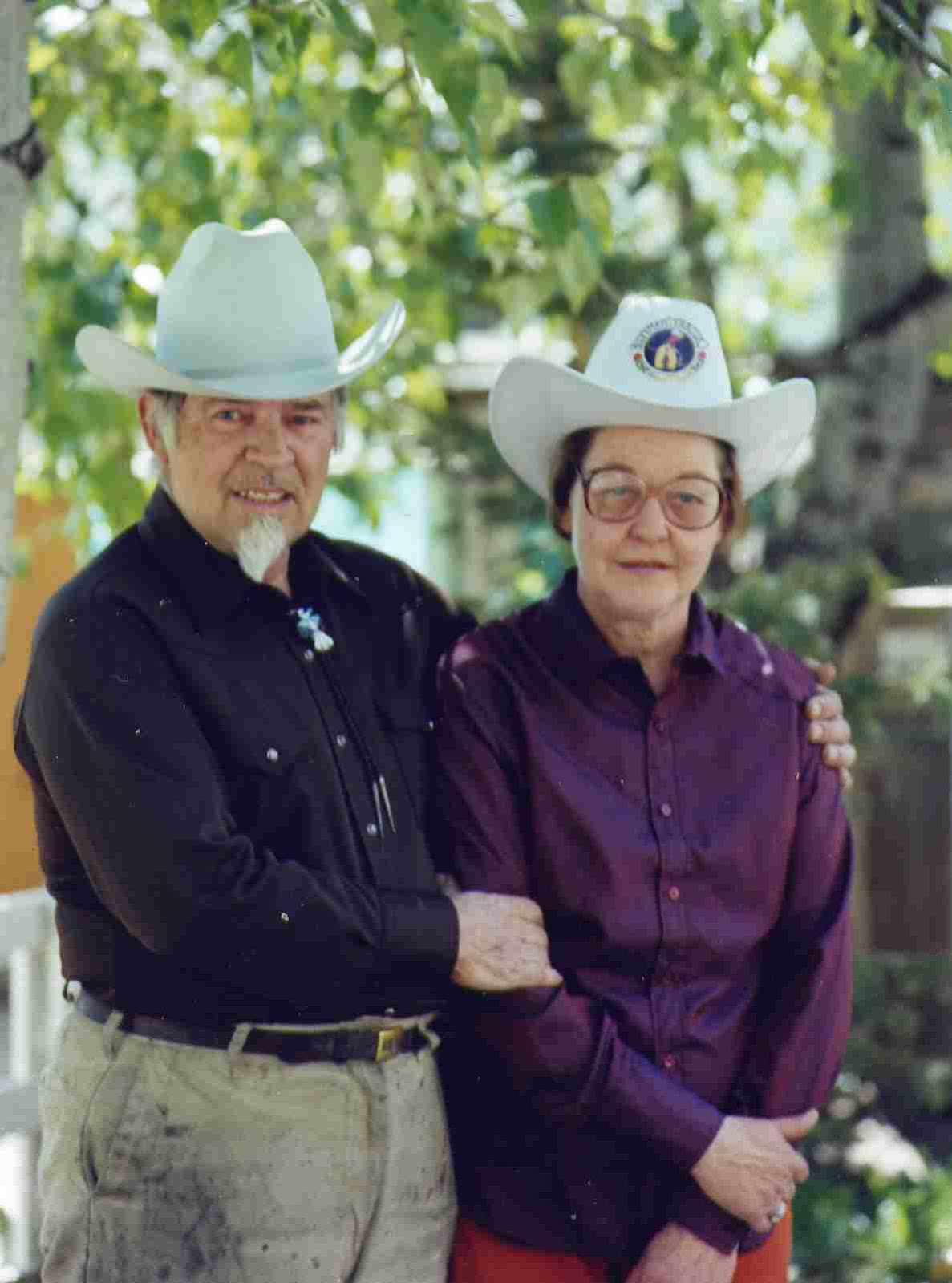 Instead of that his widow buried him in the “white people’s cemetery” in Cut Bank and had her name put on the headstone next to his, but four years later when she died in Vancouver, BC, her hometown where she built a house, her family cremated her and scattered her ashes in the ocean.  I suggested we put all the pets from the freezer in the empty grave beside Bob.

The Scriver family is buried contiguously in plots bought by T.E. Scriver when it was clear that with both boys enlisted in WWII they might be needed.  There were four gravesites but Harold's wife Hazel is truly buried beside him.  Harold, Bob’s brother, saw the worst of the the worst in combat and was quietly traumatized without anyone really knowing except his wife.  Many were like that.  A form of toxin.  Bob was spared.  To some that means he wasn't really a veteran. 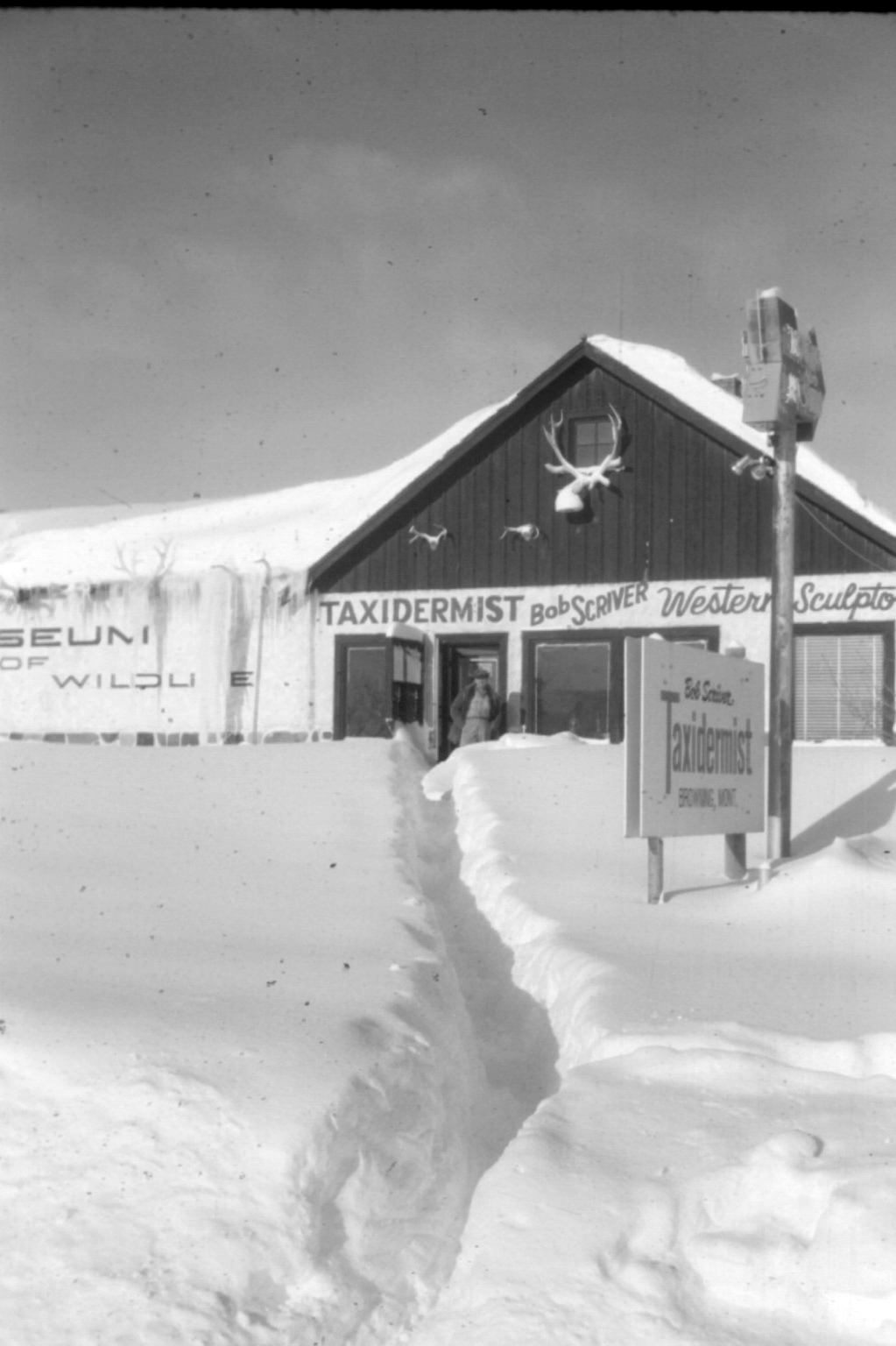 It was kind of sad when the sculpture crowded out the taxidermy.  On winter days the snow piled up quietly or the wind howled, on fall days carcasses and heads stacked up in the sub-zero museum or maybe a whole grizzly sprawled on the workshop floor next to us, thawing so it could be skinned but seeming merely to be asleep.  There was a lot of quiet sewing and gluing with only the hissing of the airbrush while lacquering noses to make them shine.  My job was often putting edges on bear rugs, sitting on the big plywood table where they were stretched -- my back against the wall and the flat bear across my legs while I plied a three-edged buckskin needle -- sometimes needing pliers to get the carpet thread through the hide and the felt edging.

At three PM Bob always declared “tea time” and we all piled into the pickup (maybe four or five of us, maybe a couple in the back) and went up to Angie’s for long johns (maple bars) and coffee.  It was a small sweet world. 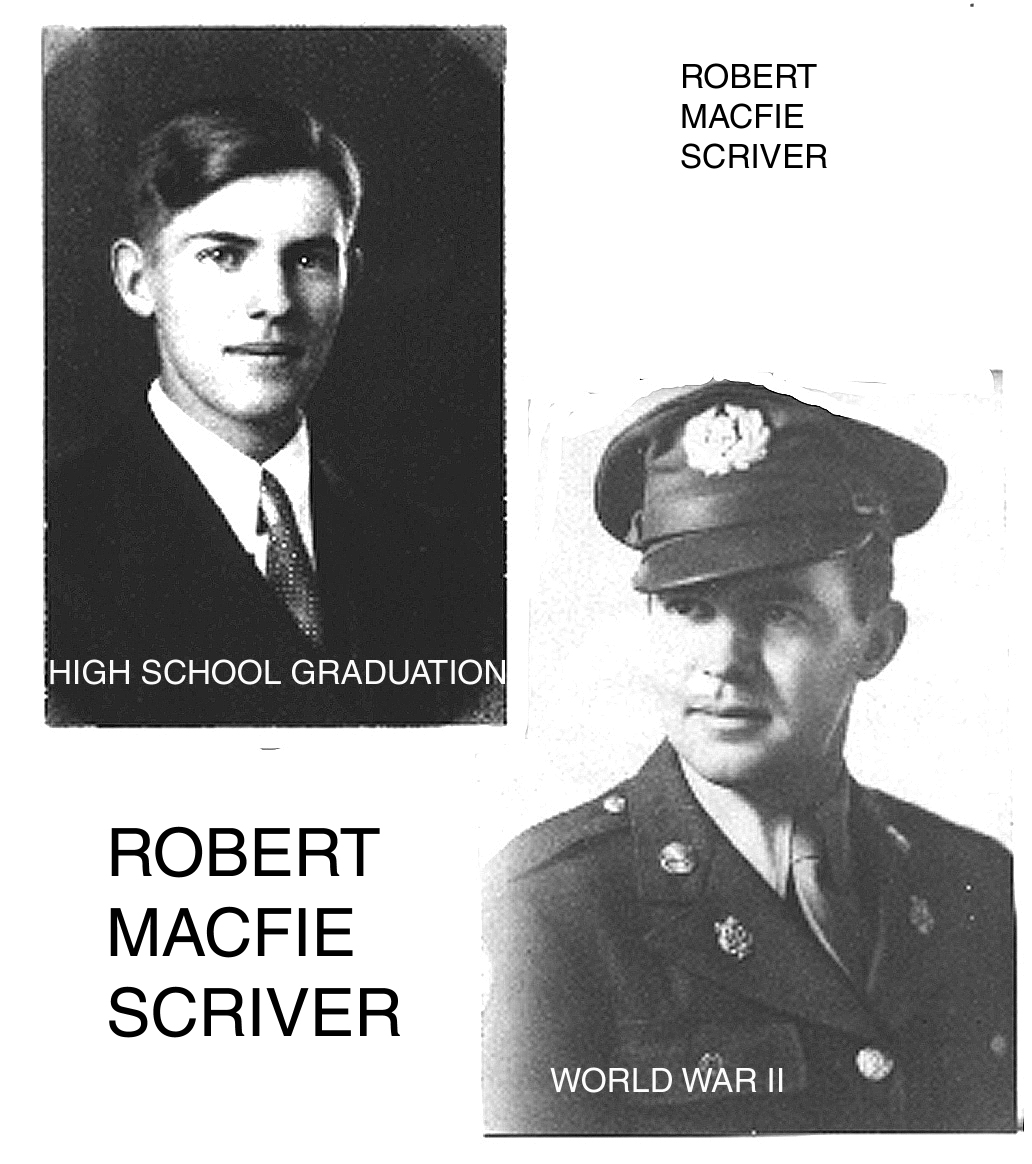