MY MOTHER WAS NOT A RETIRING WOMAN 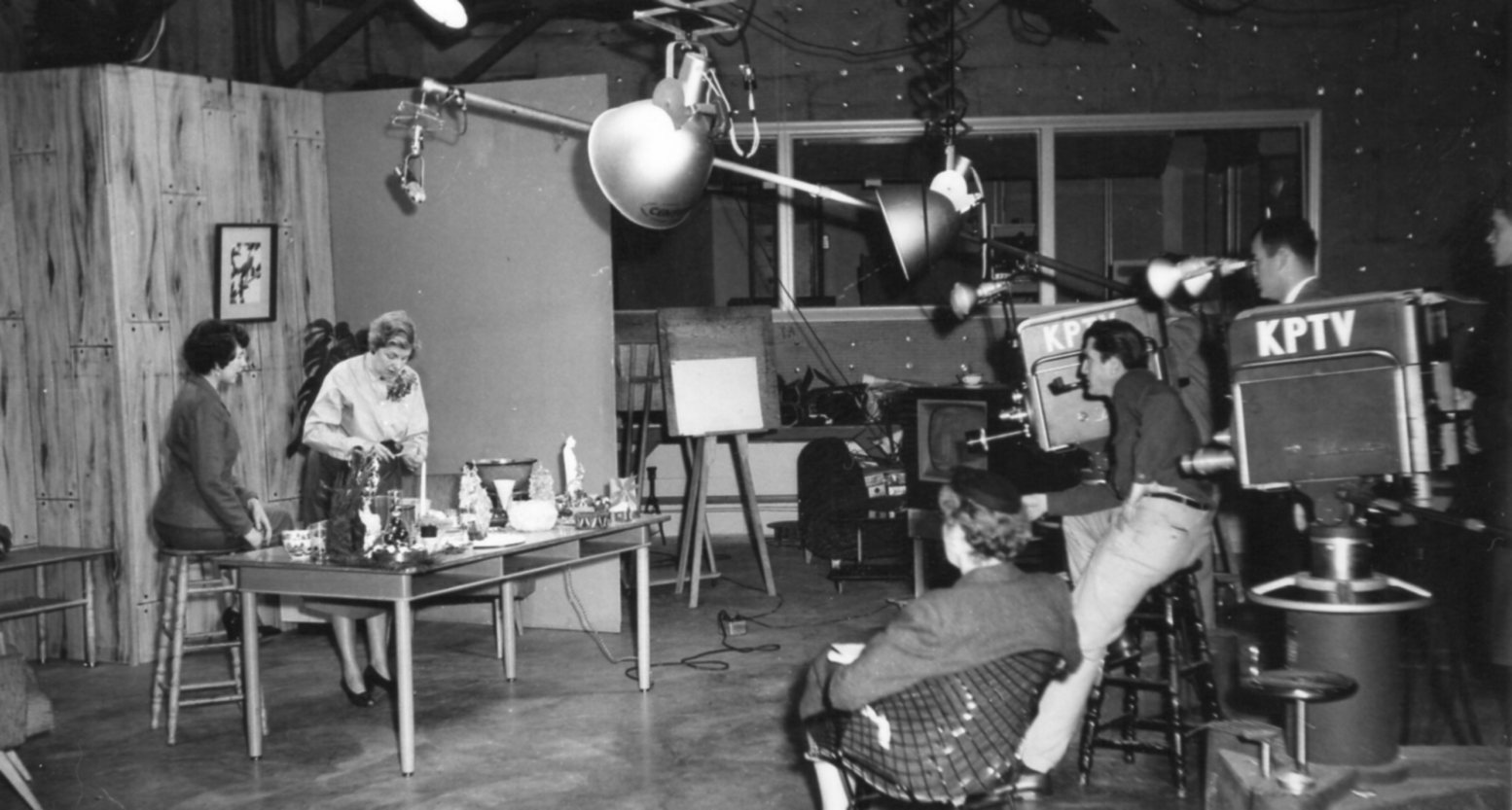 Demonstrating how to make candles on the local TV in the Fifties.  Note the director with his pipe!

One of her favorite stories about herself was that when she already had a job as a bookkeeper for the local auto dealer and was also working for the Roseburg, OR, small-town newspaper, she was in the grocery store when the owner lamented being unable to sell canned cherry pie filling.   After all, most people in that part of the world had their own cherry tree and knew how to can.   So my mother made a deal that she would get ten per cent of all sales she made, tied each can of filling into a cheap pie pan with a couple of inventive recipes, and took them door-to-door with the pitch that someone might suddenly come to dinner and catch the cook a little short.  She sold them all quickly. 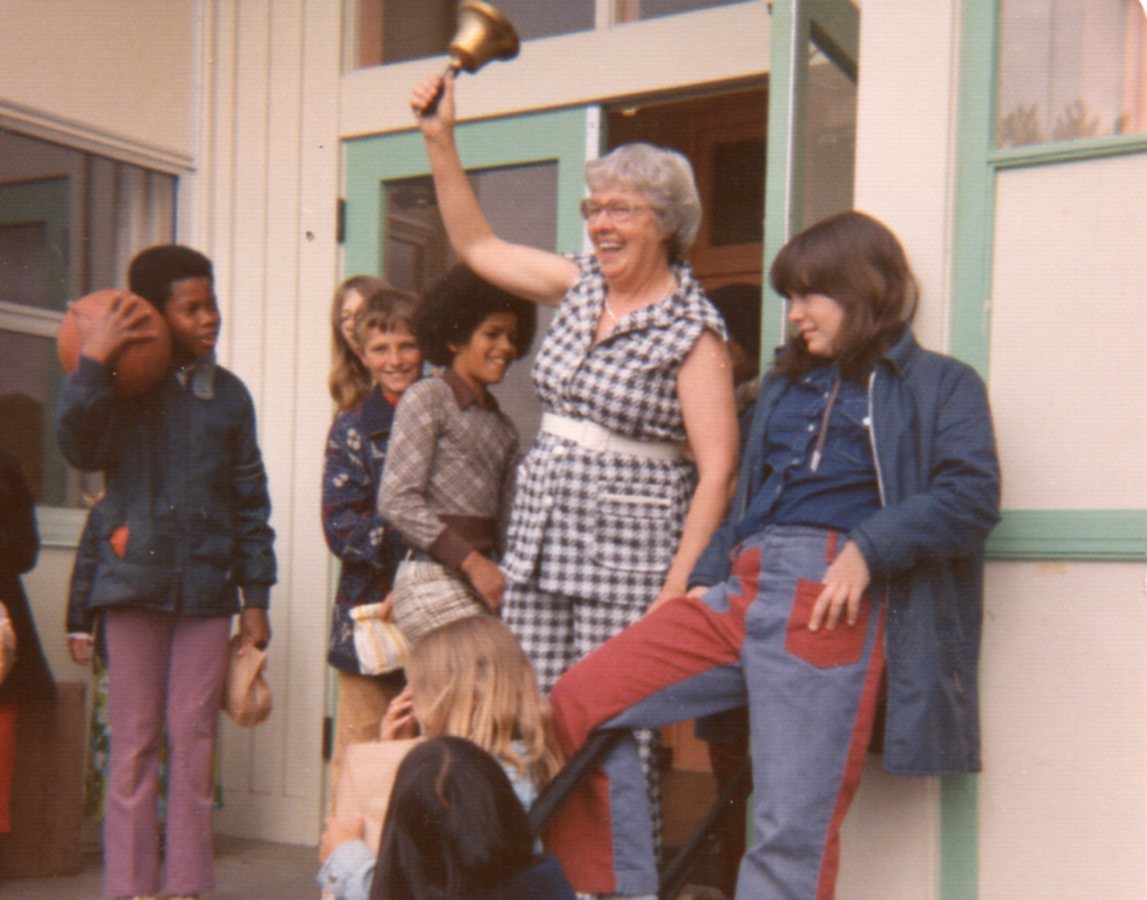 When she retired, the school gave her an antique school bell.

The school where she taught, Columbia Elementary, was just outside the City of Portland district which was lucky because she had attacked the Portland Schools so many times that she never could have been hired there.  Eventually, Portland expanded to include Columbia, but by that time she had been there for years.

Nevertheless, she stayed at this school for her whole career.  She had a good time, I think, though t was a quirk of our family that they always picked out a villain/enemy -- usually an older woman -- and a hero, the main authority figure (the principal).   (I think this is an artifact of the previous generation's dynamics.)

The kids loved her and she didn't call them disadvantaged or at-risk -- they were just "my kids."  It was the principal that asked her to be the librarian, though she had no special training -- just a house full of books.  Also, she enjoyed helping with the "arboretum" which was actually reserve land in case they had to build a new school.  When she had been retired longer than she had taught, she marveled.  Both the work and the retirement had gone by quickly. 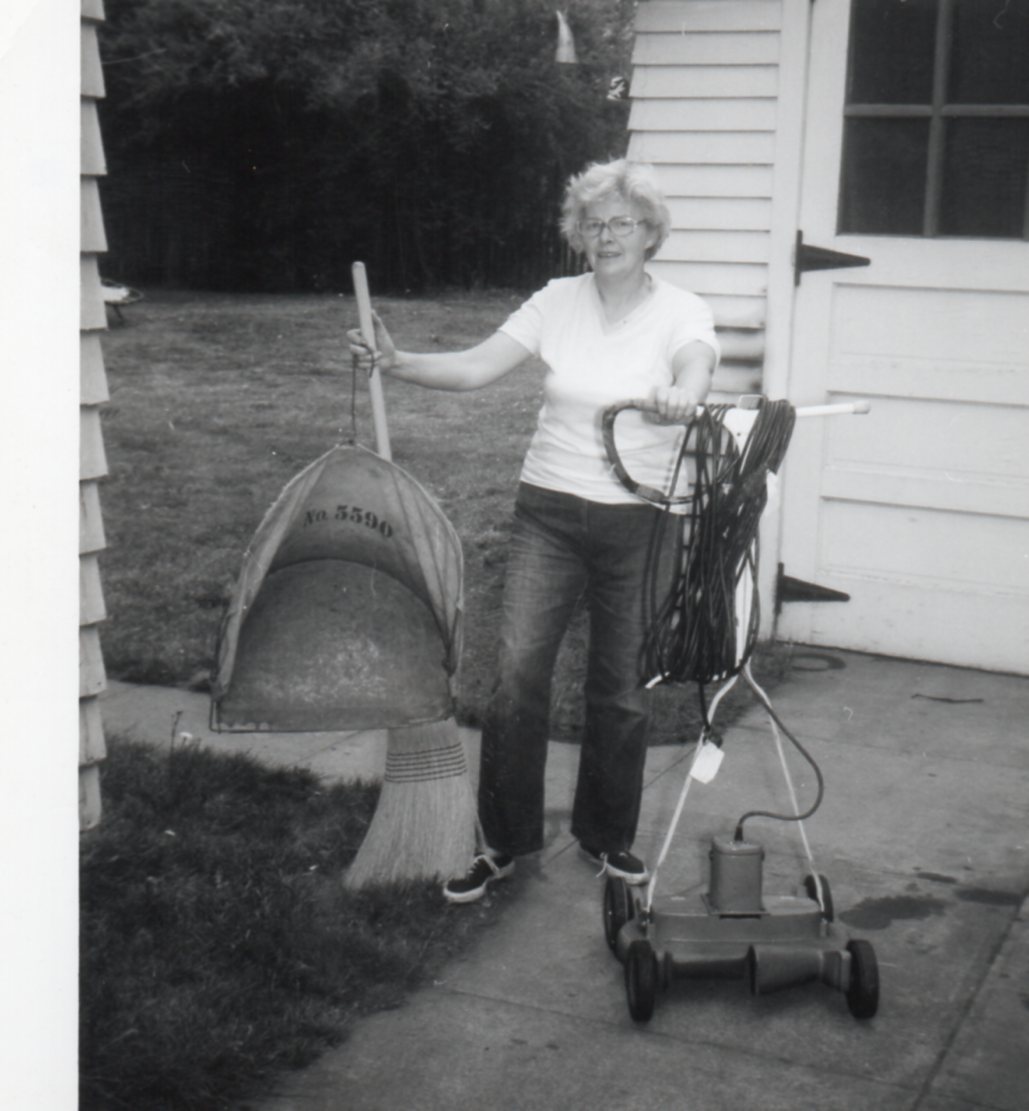 The tools of attack.

My mother was not fond of indoor housework.  She liked working on the yard because she had been an outdoor country girl.  She didn't do a little now and then -- it was a full-scale planned attack.  The best birthday party I ever managed for her was taking a shopping bag to her house at lunch time on one of these yard days.  Instead of a cake, I got individual tiramisu treats that had been decorated to look like a forest floor with meringue mushrooms and tiny logs.  My mother had not known about tiramisu and she made me write it out so she could brag to her friends, informing them of this special thing.  A big part of her life was recounting her feats and discoveries to her friends.  When she was both the oldest of the group and the last one living, it was a sadness, a diminishment, to have no one to tell about excitements.

I took her to lunch at Piccolo Mondo in the Watertower shopping center and she enjoyed it, but complained that the coffee was not really hot.  (I looked for them on Google but they have closed.)  In her last years the coffee was never hot enough and she couldn't smell very well.  She wore "Aromatics" perfume -- a lot of it -- and it's already strong.  So I got her "Wrappings" which was a less intense version of the same scent.  These are "green" perfumes.  She was mortified to realize she had been so, well, "aromatic," though she had wondered why everyone who got into the car with her immediately rolled the window down.

When my father was still alive -- he died in his sixties and was nine years older anyway -- they toured Europe and had lots to tell and many photos to hand around.  My mother always had a passion for the Asian Pacific countries and  when she was properly retired, she signed up for teacher tours of the east.  Her best friend in the neighborhood (a friend she shared with my brother) was a Philippino artist and professor of art who lived two doors down the street and loved gardening; he had his culture's respect for the old.   She also shared his cat, Mokli, when he went back to the islands to visit his family.  So one of the first countries she visited with a tour was the Philippines. 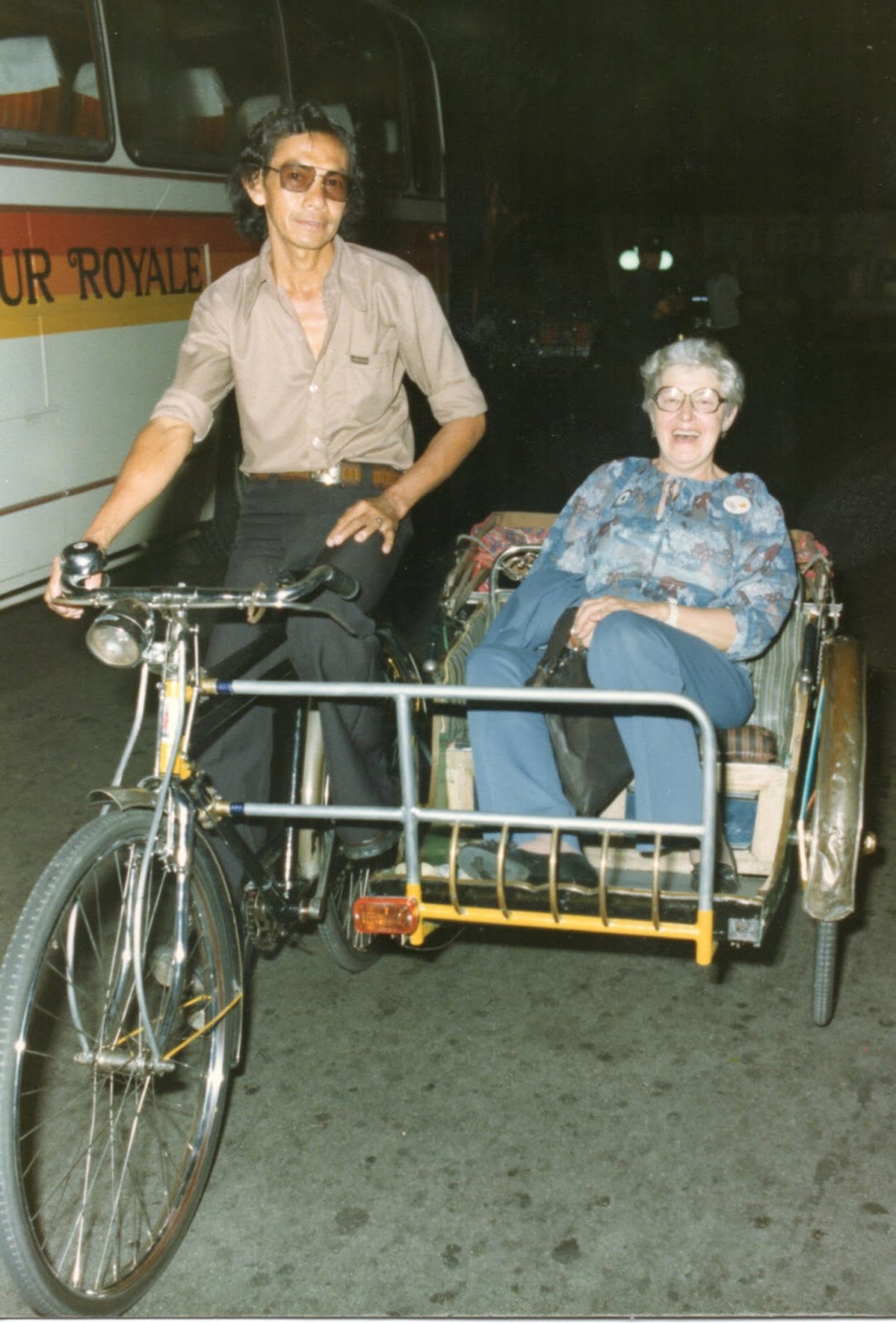 Riding a pedicab in the Philippines.

A little earlier she visited Egypt, a country she and my father had missed, and was proud of riding a camel. 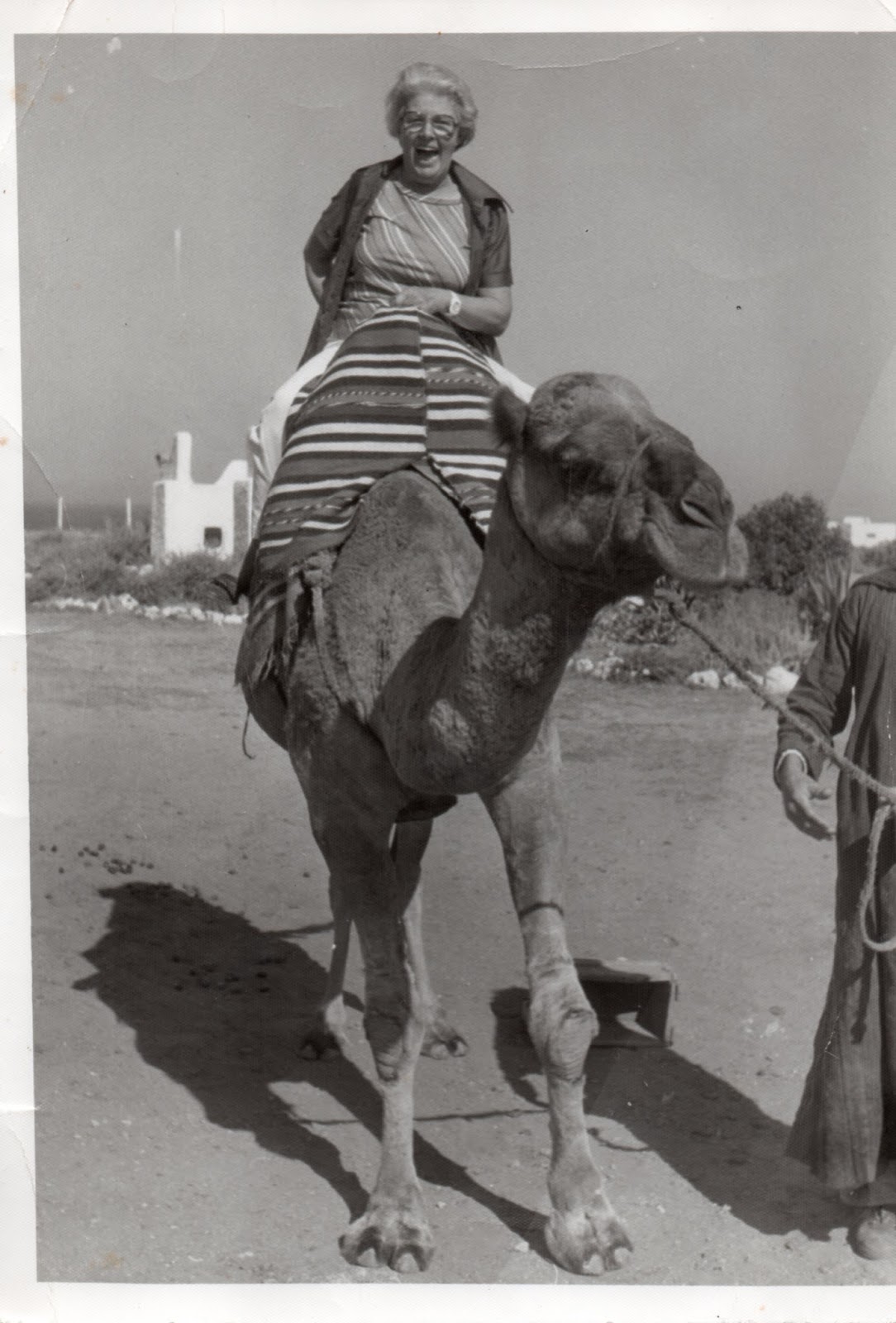 The camel was not excited, but my mother was. 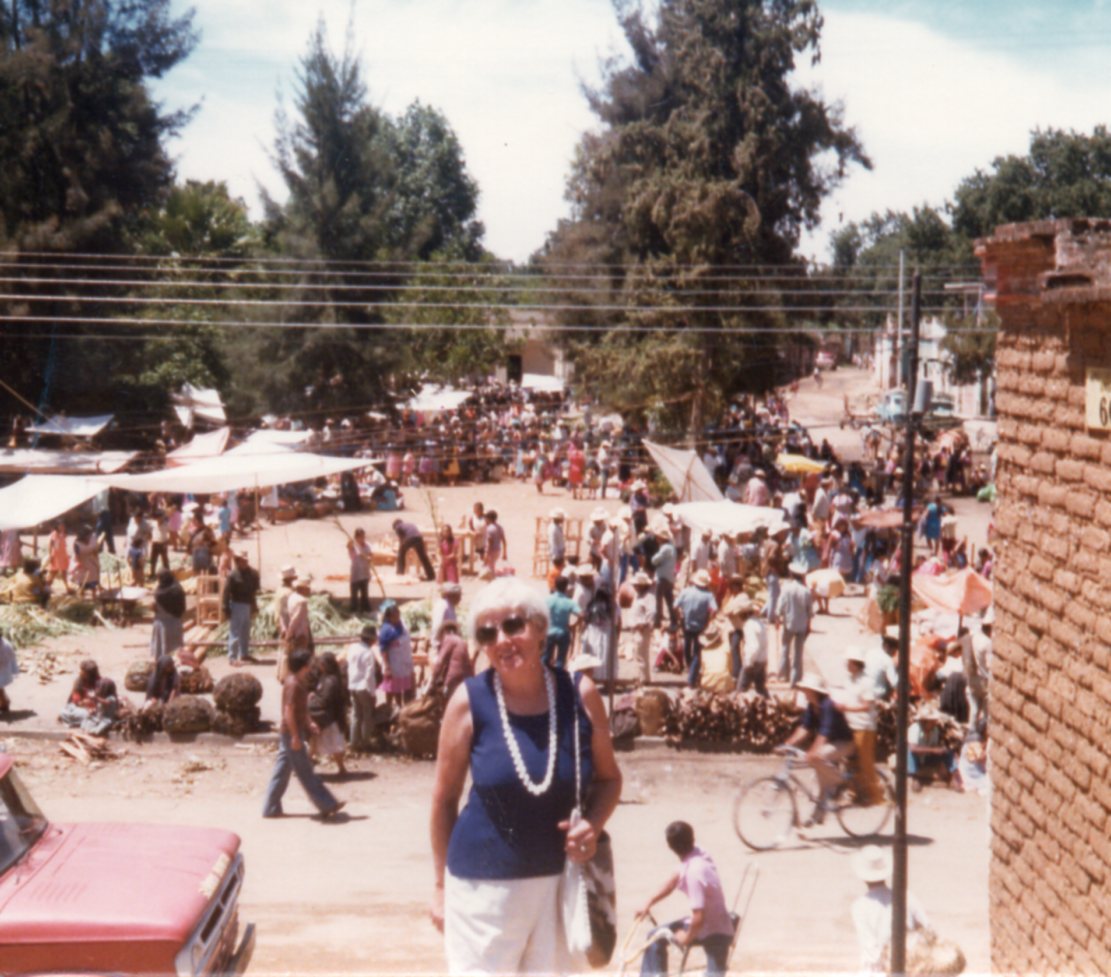 The Mexico trip was one she considered repeating.  The visitors stayed in a graceful house with a walled garden where a watchman sat all night on the wall, softly playing his guitar and singing love songs.  The owner/manager was blind and asked the teachers to read her mail to her, which they were glad to do, though it was just business.   They felt trusted and included..  My mother did not get sick.

Years later she developed a blood cancer -- I always suspect because of going back to smoking after my father died.  (He objected to smoking and drinking.)  That weakened her but she was not in pain.   it was a cancer of white blood cells that takes five years to kill the patient.  (There is no cure.)  She kept her faculties but was just a little weak.

Her doctor was Japanese.  After she died at age 89, I sent him a note thanking him for his excellent care of her. I said I thought that she was raised in an orchard, so had a special feeling for the Japanese love of cherry blossoms.  In fact, we grew up eating off "Willow Ware", looking at the wistful love story.  When I asked her about her special fondness of all things Asian, she thought it was because of the many missionaries who came through Roseburg and told wonderful stories about China and Japan in order to raise money. 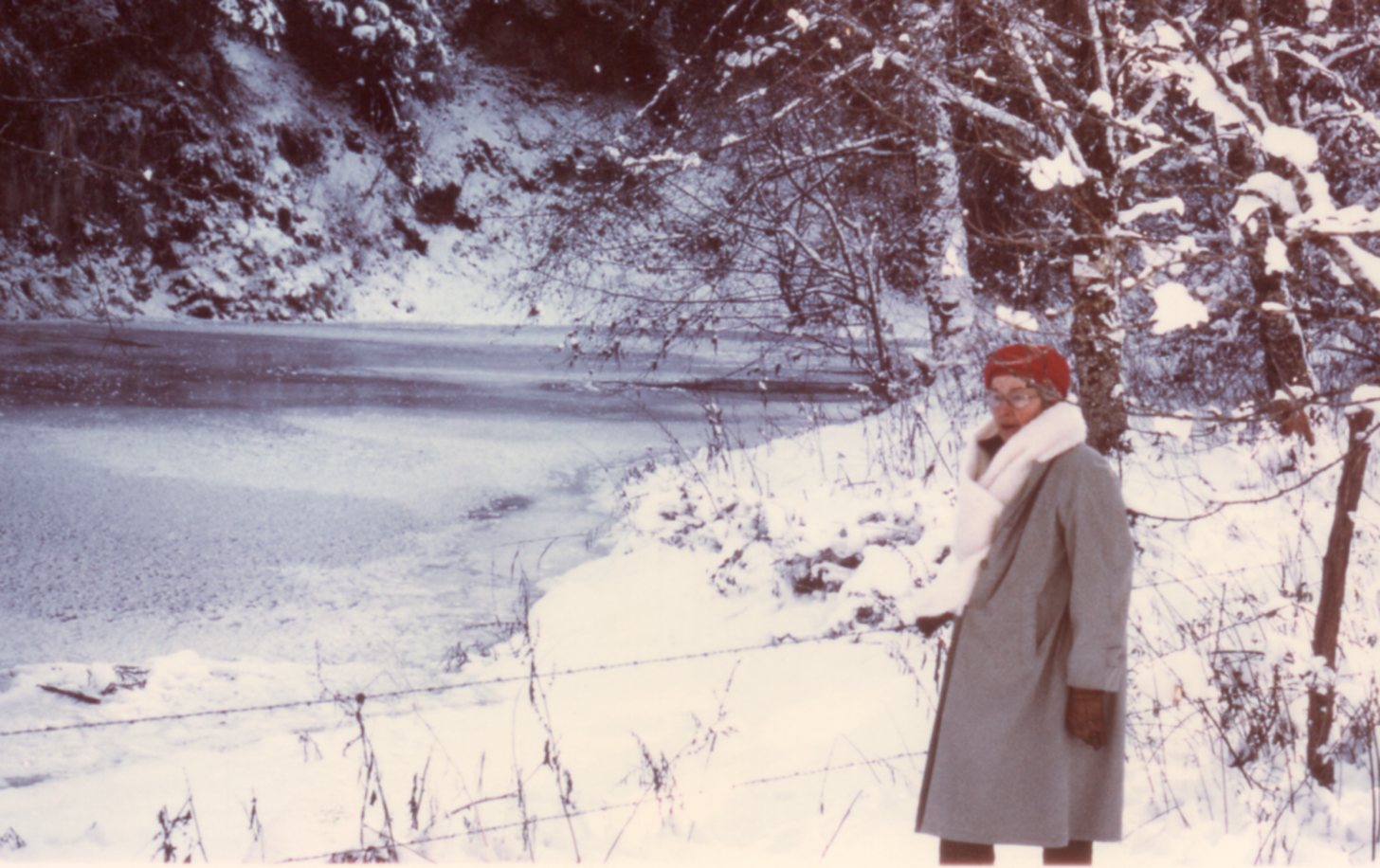 In the end, she died at home as she wished, in the "Sun Room" where the window was festooned with blooming wisteria she had brought as a bride from her mother's wisteria vine, a bit of continuity her father probably didn't know about since he objected violently to the marriage.  She said,  "I hope the next planet is as much fun as this one has been."  At her graveside service, my brother rang her retirement school bell.  Both my brothers were Marines so they knew ship bell code.  Mark rang "eight bells" which means "end of the watch."