ART TALENT IS A WEALTH 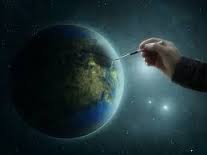 One strategy for rising through layers of hierarchy is to specialize.  One might do that alone, but usually people tend to group themselves into new hierarchies, one of the specialists and one of the clientele.  Then another kind of specialization might arise among “critics,” meaning people who try to explain which is better than others and why.

Art is one kind of specialization of a universal human skill.  Everyone can see art, make art, think about art, but to different degrees.  Doing these things will cause their brains to grow neurons, the same as any practice will develop skill.  Skill IS growing neuron connections and their ties to muscles as well as developing the muscles themselves.  One becomes better able to hold and control a brush charged with pigment and to see how that results in marks.  The capacity to grow neurons and muscles, the responsiveness of the body itself, is called “talent.”

We have been aware that Time magazine and others have proclaimed that God is dead.  But we have not realized that since this imaginary ultimate authority has died, everything else that claimed God as its source and authorization must regroup.  In the past, artist’s talent has been assumed to  come from God.  Hierarchies were thought to be assigned by God and therefore the low cannot rise because God has his foot on their necks and the high are up there because God gave them a hand up.

Now that these anatomical staircase metaphors are gone, artists are free to just step out of the system and they do.  (Actually, they always did but the best money for art was always paid by organized religion to embellish their greatness.)  In fact, through political defiance and simple “sin” artists have always cut the umbilical cord.  (Anatomy sneaks back!)  This forces “birth” in order to live.

But that separation does allow questions about what’s better, not in terms of money even though the opportunists will try to sell whatever art they can get at, but in terms of whether it “works,” whether it “communicates,”  whether it is a valid message about the universe.  Some art remains valid and some does not.  If it is tough enough to survive physically, it may go in and out of validity over centuries. 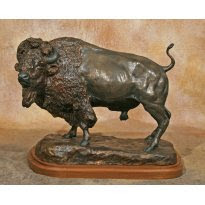 Here’s Bob Scriver’s sculpture of a bison, called “Herd Bull”.  He made it with a real bull buffalo in front of him, the one that was mounted in the Scriver Museum of Montana Wildlife, so it’s fact-based, measured, in scale except one-fifth the size of the real animal.  It’s not doing anything, but it’s standing there the way the real animal did.  Bob didn’t embellish or exaggerate — his goal was to be accurate and “real.”  It was the Fifties.  His fans had lived the history of the West, though none was old enough to have seen the big buffalo herds.  They valued buffs nostalgically, but particularly the metaphor of the dominant bull.  They wanted as near to participation and “genuineness” as they could get, an icon. 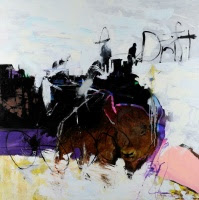 Here’s another version of a bison painted by Rocky Hawkins, an “abstract figuralist” or “figural expressionist.”  (Those’re just labels that try to describe style.)  He calls it “Drift” and the figure of the animal is at play with a snowdrift or maybe “drifting along” or maybe both.  The claim is that the very distortion of the figure gives it the reality of the emotion.

The point is that the subject, the approach, the artist’s experience and skill, the culture of the times, all influence how the value of the work is seen.  If “Drift” had been offered in the Fifties when people were used to the realism of Charlie Russell’s paintings of the West, it would have been mocked.  But now the realistic portrait of a specific bull by Bob Scriver might not even seem to be art, esp. since one can make an accurate computer-generated replica of any three-dimensional object.  Photography once seemed remarkable because it was an accurate replica — or so it seemed.  Now photographs that are “creative” might be valued more highly.

Appreciation for art has become many-lobed.  Younger, more “hip” lovers of Western art might like Rocky’s “Drift,” but there is still an audience for Scriver bronzes and “Herd Bull” shows up in auctions all the time.  For a while Western art critics didn’t exist and Western art wasn’t considered art, at least not “fine” art.  It was mere “illustration” though admired by many, and Helen Card was one of the few people to pay attention.  Then Harold McCracken, then Kennedy Galleries in Manhattan.  It took a while for customers to gather the courage to decide what had value for them.

Several forces helped.  One was biographies of major Western artists, especially colorful characters like Harry Jackson, another was the organization of Cowboy Artists of America which was basically a marketing co-operative, and another was that the men who had made their money through the development (you could say exploitation) of Western resources had collected art as a way of holding wealth and didn’t want to see their collections dispersed.  They founded museums all across the country.  At present the aging of these people and the stifling grip of certain art exploiters has brought the field to a kind of pause, not quite a standstill.

There are other subtle forces: a movement towards high-end architecture that is glass and stone — no walls to hang art.  Now some of the most potent art is literally moving: video.  Does one install a giant video screen over the fireplace to display one’s acquisitions?  Or does one keep the art in pocketed form, small format, to carry around.  How narrative does art have to be?  The early Western art was criticized for being “merely illustration.”  But most of the great paintings we know are storytelling.

Deeper than that is the movement to redefine wealth.  People are always asking how much this painting or that sculpture is “worth.”  The answer has to be “whatever someone is willing to pay to own it.”  We are dominated by the definition of “paying” as money shelled out by someone acquiring something to put in their space as proof of their significance.

But there is also a sense in which wealth is the ability to generate art, not because God dropped it out of the sky onto the artist’s head or sent a letter saying they were authorized, but because it was something the artist used his time and space to acquire, a part of his identity that comes from the gut.  Like any other work, it’s earned.

Posted by Mary Strachan Scriver at 12:16 AM