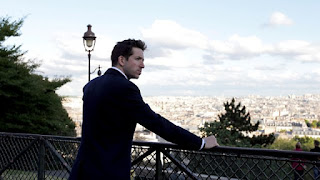 I just watched a three part series called “Bright Lights, Brilliant Minds: a Tale of Three Cities” in which Dr. James Fox explains his admiration for Vienna 1908, Paris 1928, and New York City 1951.  These were times/places considered extraordinarily flourishing times for art and thought, all three of them intervals of extreme change and worry just before War sweeps the world.  (The last one is the Korean War, or maybe Vietnam.)

It turns out that this BBC Channel 4 production is a feature of a new website called BBC Arts.  All very high brow, the usual Brit effort to take the high ground, which is fine if you’re up for it.  The assumption is that change, defiance, break-throughs by figures who became famous and made a lot of money, are all more deserving of attention than others.  Intensely difficult times of change “cause” brilliance because of the attempt to cope.  This could be challenged.  But the program is an interesting walk-through and, given the present, one hopes that the idea is true.  Fox, who is an art historian, is described in newspaper quotes by his anonymous biographer on Wikipedia as “absurdly lucid.”  His is an intriguing entry altogether if seen as a list of high-culture TV.  I hope the various documentaries will all show up at BBC Arts.

If you are a person of high erudition who knows about artists and the esteem of certain cities, but are getting a little tired of all this arrogance and assumed importance, you might enjoy a little book called “The Caravaggio Shawl,” though you’d need another dimension of sophistication to give you enough confidence to read it, at least publicly.  Samuel M Steward (1909 - 1993) also has an eye-opening entry, though the bios of such people are not dependable on Wikipedia.  https://en.wikipedia.org/wiki/Samuel_Steward  The point is that he began as a college professor and then, under guise of running a tattoo business in Chicago and then in LA where he was the official tattoo artist of Hell’s Angels, wrote high end porn.  He is a spelunker of the underworld, using big Latin words to explain. 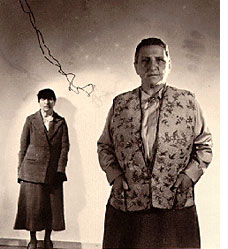 The book is one of four mysteries, each featuring (NOT Miss Marple) the famous Gertrude Stein and her partner Alice B. Toklas.   Attempts by the latter to match with a yarn sample the color of the heel tendon of Orphee in a painting by Caravaggio reveal that the real painting has been replaced by a copy.  The plot is unimportant, only an excuse for biting satire on pretentiousness (which excuses the slightly batty devoted women) and a lot of nutty word play, using double-entendres, grammar critique, and the jokes produced by cross-referencing two languages — French and English.  The English practice of saying naughty things in French is a major source.  The dialogue of Stein ranges from semantics to exclamations such as “Holy Cow”!  Latinized composite words show up in the chapter headings, such as “A Zetetic Docimasy and a Quaternion.”  A free-association chapter while walking the little dog is entitled “Kayaking Up the Medulla Oblongata.”

Likewise, the practice of describing a scene or wardrobe in vivid detail is presented here in worshipful minutia:  “. . .the faint crackle when Gertrude turned over a leaf in the black-and-green-grained schoolboy notebooks she always employed to write in; the little sliding sound (if the room was very quiet) that the monster pen made on the paper, the small pause and moist click as the nib of the pen touched the glass neck of the ink-bottle; and the deep-throated grunt of the chair-joints as Gertrude shifted her weight.  All of these together — or any two of them separately — meant that Gertrude was writing and must not be disturbed.”

As a wide-waisted woman of maturity, I was interested in the several descriptions of what these famous women wore:  “Atop the brown tweedy skirt that Gertrude wore over her ample hips was a satiny yellow blouse, handsome under a lovely brocaded vest, all rose and beige, with intricate appliqués of silver thread in traceries of leaf and vine patterns.  Alice, smaller and somewhat bent, was in a tailored grey suit, very smart and well-fitting, with a white shirtwaist and a small black bow-tie, a dark butterfly perched at her throat.  Gertrude was bare-headed, her Roman haircut brushed well forward and Alice wore a smaller hat than usual — almost a sailor hat with a down-curving brim of shiny black straw with some dainty white lilies-of-the-valley nodding a little as she walked.”

Male readers might not be very interested in the above, but few females will be attracted by the criminal’s main perversion: stabbing his lovers in the rearend with a corkscrew.  The fact that he’s a “flic” will surprise no one these days.  This is not a particularly sexually explicit sort of book, but rather a Proustian entwining of the boringly mundane with all the nuances of social climbing that often preoccupies a certain sub-category of atypical persons, even in the protected world of the louche.  The manic flights of style mock and evoke James Joyce.

So Professor Fox identifies his versions of Caravaggio  (quite the fashion lately) as Picasso (the ladies approved of him), Mondrian, Egon Schiele, Andre Breton, Jackson Pollock.  All these male people are bitingly critical of society, but caught the attention of scholars like Fox who made them markers for art movements.  Steward knows all this and enjoys making fun of it.  The reader will need as broad a background in order to get the jokes.  If that person knows Paris well enough to follow the locations, so much the better.

Posted by Mary Strachan Scriver at 11:15 AM