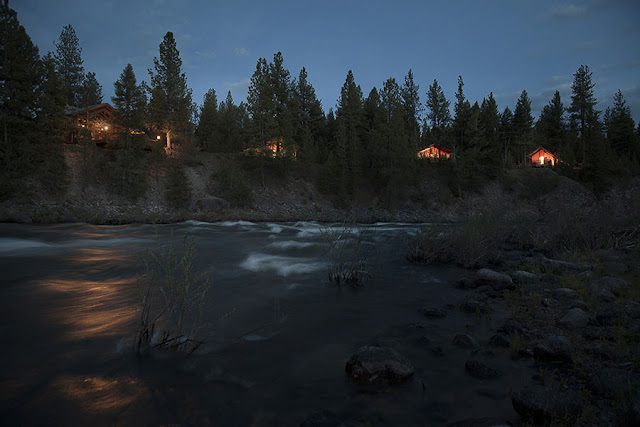 (From "BETWEEN THE RIVER AND THE ROAD", a longer essay unpublished.)

Human settlement patterns around the world follow the water.  When density reaches a certain point, the road forms along the same route because that is where the people are   -- because that is where the water is.  If you look at the Blackfeet Reservation at night, either from a satellite sky-perch or even by driving through, you will see this pattern.  Each stream-centered valley forms a community.

The Town of Browning has just been dissolved and the real reason is the water.  Willow Creek does not carry much water and when it gets to the location of the town, it spreads into a sheet that creates a marsh instead of a deep thalwag.  (The thalwag is the course of the deepest water.)  In early days — a century ago — there was neither the knowledge nor the tools for determining this.  Anyway, no one thought about the human dimensions of water use as ecological, because the term “ecology” hadn’t been invented yet, much less the modern understanding of the dimensions and relationships.  Now we think of the ecology of everything, including genetics and including the structure of families.

My aunt said to me, “Never buy land without checking for an adequate well.”  She learned this the hard way, as my grandfather — urged by his birth family to move near to them outside Roseburg, Oregon -- bought hastily.  The prune farm on Roberts Creek had a slow-to-fill low-yield well.  Economics for prune farmers weren’t good anyway, and because the land was slanted and relatively dry, the only practical crop besides prunes was chickens.  So my grandmother stayed there to raise girls and poultry, while my grandfather stayed in the family business of construction, which deconstructed his family. 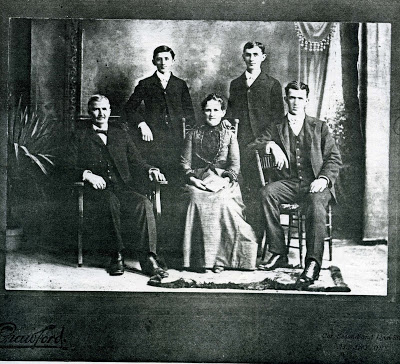 John Pinkerton, my grandfather, on the far right

The Pinkerton family was parents and three sons, who transplanted to Washington State from Illinois and did well on the construction of huge barns that supported the new dairy industry on high grass wet lands.  Two of the sons were twins.  As adults the family was vulnerable to lung afflictions from the dampness.

The father and one twin, who was married and had a daughter, moved to Roseburg, acquiring rich land for small crops, like berries.  On that land which was along a high branch of South Deer Creek grew a “council tree” where indigenous people had gathered for many centuries.

One twin stayed behind to finish up the business there and died of a mosquito-borne swamp fever.  His mother felt the family doomed him and grieved the rest of her life.  The surviving twin was a gentle religious man, but my grandfather, the other surviving brother, was overemotional and judgemental; the tragedy didn’t help.  His fierceness attracted my grandmother, who saw it as protective.

The Oregon prune orchard was where my mother grew up, much aggrieved by what she considered a step down from the previous comfortable home in Washington.  There were two older girls, my mother the oldest, then a break in the sequence — maybe due to moving — and then two more girls about the age of their cousin. 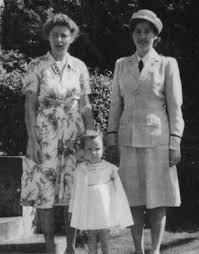 Here are the two older girls and myself.  My mother, Lucy, is on the left, drawn down emotionally and physically by having babies and losing the career-girl lifestyle which had given her freedom, money and a busy social life.  She had not thought living in Portland would be quite like this.  She had not expected her husband to be on the road all week.

On the right is the next oldest girl, Vera, who is at this point has finished her nurse’s training at the precursor for OHSU and is serving in the Army, about to go overseas.  History, the catastrophe of war, had intervened.  She signed up as soon as the war started, interrupting her career as the head of surgery operating at a Great Falls hospital.  When she was in Portland, she and my mother were close and my mother accepted her expertise in medical matters.  (Ironically, both eventually had more children than they had planned.)

The three other Pinkerton girls, the young ones, Helen, Aliene, and Nadine (the cousin) formed their own subgroup which was smashed by a high school accident.  Vera was driving herself and Helen back up Roberts Creek to home on a rutted muddy road when she crashed into a stalled-out and dark car.  There was no way to steer around because the ruts had seized the tires. (A fate metaphor.)  Helen went through the windshield which fatally cut her throat.  Their father, that ferocious man, proclaimed that they would ignore her death and go on as though she were just temporarily “away.”  (The legacy to me is contempt for denial.)

Vera did not attend high school the rest of the year.  No doubt this tragedy influenced Vera’s choice of nursing and then her decision to join the Army and serve in London and Rheims.  In London the smog was reportedly so thick that at Harrod’s department store, one could not see the tops of the counters.  I suspect she took inhaled damage, the kind that shows up in old age as derangement and subtle endocrine consequences.  She saw horrors that finally slaked her appetite for compensation and she returned home stunned.  Now we would call it PTSD.

Vera married the last bachelor Hatfield who was not “mental.”  I learned about the ghost one when visiting her ranch as an adult.  She went through a box of old photos with me, but tried to skip over him.  (He's not in the online genealogy records or obits.)  His features were the same handsome face as Mark Hatfield, the governor and senator, (who was cousin to this set of sibs, but an only child with an intelligent and ambitious mother).

This South Deer Creek set of sibs was not education-minded, though another set was.  It all depended on the mothers.  There was a thin thread of instability in the family of this mother, but she carried genes for a very pretty girl-face, big eyes and a rosebud mouth.  Roy Hatfield was a strong opinionated father who guided his family firmly.  He did not take John Pinkerton seriously.

Eventually, in old age. Vera and Aliene both died demented, but I don’t think it was either Alzheimers or vascular.  Aliene’s was diagnosed as electrolite imbalances — she was forgetful but sometimes simply dropped in her tracks, unconscious.  The last time she fell she lay in the grass dead, holding the laundry she had been hanging.  I interpret my aunts as suffering from pesticide/herbicide poisoning related to the raising of sheep — in pastures, not in roving flocks, which meant pesky flies.  The sheep had protected the Hatfield men from serving in the army.

Aliene's husband, the Alpha Hatfield, was pretty clearly an Alzheimer’s victim.  He kept taking off in the pickup until “they” hid his keys.  Then he made such a fuss over the empty key hook that they hung keys for some long-gone vehicle which kept him busy inserting them in the lock uselessly.  Then he left for town, puttering down the highway on the riding mower.

My mother died at 89 with no signs of dementia.  When she was angry with me, she called me Vera, and when she was pleased, she called me Aliene, but that was lifelong.  With Vera the relationship was rivalrous or sometimes co-conspiring.  With Aliene it was fond but rueful because she had married a Hatfield.  My mother was the Alpha Pinkerton girl.  She scorned Hatfields, who lived well in the broad and sunny South Deer Creek Valley.  She wanted city.

I suspect that the blood cancer that finally killed my mother was related to her resumption of smoking after my father’s death.  (He was against smoking, drinking and gambling because he spent his money on cameras and 78 rpm records of classical music he didn’t understand.  He may have had a graduate degree and progressive views, but he was irreducibly bourgeois.  His morality was rule-based.)

I have never smoked.  My early poisons have been heavy metal and acids from the foundry.  When I die, it will be from lack of exercise and maybe inhaled cat hair.  What is my thalwag?  It wasn’t marriage, it wasn’t vocation, it wasn’t urban, it wasn’t even physical.  But it was secretly passionate.  This inquiry must be continued, searching out the threads interacting below my consciousness, but able to weave presumptive assumptions.

Posted by Mary Strachan Scriver at 10:32 AM