THOUGHTS AFTER "CIDER WITH ROSIE" 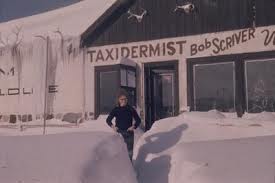 Today is the last of the bitterly profound cold of this Arctic Vortex.  The records show something equal in the Sixties.  I was here, but I was young then, and madly in love, working as hard as I could, singing.  This time I could only hope I wouldn’t need an ambulance, that the gas would stay on, that the cats in the garage wouldn’t freeze to death.  (They could barely eat their catfood before it froze too hard for teeth.)

The shells of old poorly insulated houses like this one creak and sag.  I can’t plug in two electric heaters at once without blowing a breaker.  The pickup is useless but roads are risky and maybe there’s no mail anyway.  The UPS man, bringing another case of mail order cat food, is normally in a tearing hurry — taps on the back door and hotfoots back to his truck.  This time he knocked hard and lingered, chatted for a few moments.  It wasn’t until later that I realized he was making a welfare check, since I haven’t been to the post office for a week.  They probably asked about me.  Daily he leaves off some packages there, I presume because they are addresses too remote to visit.

Once my brains are emptied by the day’s writing, I watch vids via the computer.  Netflix is all explosions and sex while PBS has sunk into royal sentimentality.  So I’ve gone to YouTube in spite of many of their films being blurry and muffled.  It’s hypocrisy to criticize PBS when the BBC films I seek out are the source of their trademark shows, meant to be high class.  But I like the very early roles of the Brit repertory actors who now show up as grizzled old battlers in fantasies.  Even the women have been allowed to age over the decades.

Yesterday I struck gold with “Cider with Rosie”.  It was the perfect film for a very cold turn of the year because it is a celebration of Laurie Lee’s childhood in country England, specifically Slad, Gloucestershire.  The book came out in 1959 when I was in college, but I have the unreasonable feeling that I read it in grade school when I was his age.  There have been several film reiterations, one in 2015, but I was watching the one made in 1998.   https://www.youtube.com/watch?v=cLx1vwKqmCs
It preserves the gloriously poetic writing in the author’s own voice by using him as a narrator.  His purpose is to make memorable the last of the agricultural rural life, and he succeeds.  To me, this has far more meaning than the Big House gentry of “Downton Abbey.”

The turn from agriculture to industrial factories is still very recent — Laurie Lee was the same age as as Bob Scriver.  My parents grew up in circumstances less embroidered than the scenes in this film, but not that different.  Their lives were on the cusp of the shift from rural to industrial, propelled by war.  In fact, Browning and Valier still cling to some of the old ways while wishing for the amenities of the industrial revolution which are now beginning to shrink.  Infrastructure is failing.  Railroads are a good example, and even the search for oil and other minerals is changing.

Of course, here on the high prairie there is an underlying way of life that goes back millennia, the hunter-gatherer tribes we had better remember in case it becomes the only means of survival again.  This time without buffalo.

We are on the verge of an entirely new set of givens that are hopping over everything else, though many people are not educated or connected enough to realize it.  It is putting many people out of work, shifting our economic patterns.  Megacities thrive on high tech, even as naked people in SE Asia or Africa are displaced, carrying only a plastic water jug and a starving baby.

The president is not Eisenhower anymore nor is it even Reagan.  We will spend 2018 throwing the bastards out of office, wasting funds that could rebuild Puerto Rico where the factories make meds and IV dispensing bags for the rest of us.  Many will die and more will not care.  When I talk to people about politics, especially women, they are likely to say, “It’s all so ugly and confusing.  I just won’t have anything to do with it.”  Which is how it came to pass.

My own style, partly made possible by this long interval of retirement (which means I have the time), is to plunge in, following the liberal side, absorbed in The Rachel Maddow Show.  Trying to get my mind around a system so governed by the universal corruption of profit, that a charlatan can become an “asset” of a Russian KGB-originating plutocrat in order to try cancelling progress across our nation.

I’ve been reading revisionist histories that go back to the first hominins.  I’m halfway through “The Silk Roads” by Frankopan, which is the clearest explanation yet of how we got to where we are by struggling to control the Middle East for the sake of oil to feed machines and for its militarily strategic location.  This book is also frank and vivid on the subject of food as a weapon that deliberately starved to death millions of RUSSIAN/UKRAINIANS — far more than bombs.  The price embittered Russia, though it was set by Stalin.

When compared with that iron reality, “Cider with Rosie” is golden escapism to an England where it doesn’t seem to rain and there is food even without income.  Partly this is due to the receptivity and generosity of women, a whole sequence of them from grade school to grave.  Stern reality is not always the best or even the most moral course of action.

This morning the sun is back, sluicing gold through the blue drifts.  Feral cats are plowing trails in the snow.  The world is cyclical -- though the planet wobbles on its axis -- and human lives at least tell stories.  It’s Sunday and I don’t hear plows out on the highway, but the usual number of big pickups is parked at the Baptist church next door.  Day after tomorrow the temp is expected to be in the Thirties, so our struggle will be with wet rather than cold.  This snow, soaking into land with a water table that has been shrinking, will mean good crops and those can mean peace.