ORIENTALISM: A STRATEGY FOR DEALING WITH THE OTHER 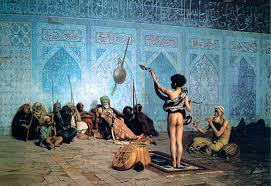 "Orientalism" by Edward W. Said was published in 1978 but written over a long time of formation in Said's mind but it is most often misunderstood. It is not about the Orient. This mistaken belief has been so powerful that "Oriental" is a word no longer encouraged -- I'm told I should say "Asian" but that would be appropriate only if I were talking about "brute facts" or truly existing phenomena.  "Orientalism" is not about that.

Said was reflecting on a sociological/psychological/military/economic/media construct by people who were not actually part of the "brute world," but rather the periphery that formed around an "Other," which they fancied was a certain way. They were privileged, entitled, powerful, and at the top of the hegemony created by colonialism and imposed on an identified category of people (brutes). The strategy was so collaborative and so endorsed by politicians, writers, merchandizers, artists, and all the other second-level self-appointed "experts" that the IDEA of the Orient took over and blotted out what was really there and its history, the understanding of the people who were and are still there.

"Orientalism", as happens with these ideas, was once a privileged idea of the educated and entitled.  Over the years it wore thin, proved misleading, and died of irrelevance except for certain people.  Everyone wandered off.  it's still wonderful stuff.

Said came to the U of Chicago while I was there ('78-'82) so I saw him and his wife.  He was on a day-long collegium: proud, setting his own schedule (late returning from lunch), handsome, wearing the putty-colored high quality clothes of the sophisticated. I did not read the book. It was not on the bibliography of future UU ministers.  It should have been there.

"Orientalism" is to define by geography, income, social category, persuasion, or denomination any group, creating around it a fiction so vivid that it persuades everyone that it is a true essence, and then acting out or depicting the construct instead of the reality. It's almost a description of where American politics go wrong and how we lose wars that never should have begun. But it is a terrible (in the root sense) struggle to face our own "brute" reality.  (Said likes that word "brute" and so do I.)

So we escape to this strategy about the Other: the criminal (oh, how we love our fictions about mafia and drug deaiing), the Mexicans, the women, the Russians, the Canadians (!), the artist, the . . .whatever we know only as a big block without considering their multitude of inner categories or their context, including their specific history.

For a decade I have chosen several groups that are the sources of fantasy, some of them long-lasting, close to eternal, and always a little scary which is excellent for sales.  Often infused with suffering.  This happens organically with colonies, where by definition a superior power goes in to control a foreign population with force.  But it also happens within the US, often because of economics.  One of my chosen groups is Blackfeet on the Montana side.  Another is young male sexworkers with AIDS.  Specific as they are, the fantasies about them can be countered with individual testimony from people INSIDE the reality, but also is sometimes endorsed by testimonies or first-hand observations rather than library studies. The main thing I see is how unreliable the latter are. But I have been convinced that the "inside" often sees its only safety in secrecy.

The next thing I see is how passionately people from outside the "circle of actuality" can be if you question them.  Some people believe that the "Indian" described by James Willard Schultz actually still exists somewhere.  They have no understanding that he was a fellow with a bad back making a living by giving people what they want.  Likewise, they will not accept that Mary Renault's idealized young male lovers are produced by a lesbian woman denied the openness of her own story.  But others, thinking they are superior in the hegemony of thought, believe that only exposée is true.  They forbid the enjoyment or sales of idealized fantasy and insist that only misery is true.  And only true if sourced by a member of the category.

Said says, "Taking the late eighteenth century as a very roughly defined starting point, Orientalism can be discussed and analyzed as the corporate institution for dealing with the Orient -- dealing with it by making statements about it, authorizing views of it, describing it, by teaching it, settling it, ruling over it: in short, Orientalism as a Western style for dominating, restructuring, and having authority over the Orient."  Then he admits he is relying on Foucault.  (P.3, Intro)  He feels the Franco-British sort of anthropological "discipline," an excuse for resource seizure, was much energized by WWII.

This is the matrix for Trump, who still suspects anyone not like him is from a different species, including women -- merely resources. He used the American myth of coming up from riches, the self-made man, an "Other" that small down moguls endorse and the NYTimes reveals.  Kavanaugh relies on a parallel myth, the man in the smoky back room card game with the rich and powerful, puffing cigars and sipping whiskey, but still clever enough to win with a bankroll from a sponsor.  Both these "types" with their supporting myths are well-represented in our media, sometimes presented as "brute reality."

Said cautions, "One ought never to assume that the structure of Orientalism is nothing more than a structure of lies or myths which, were the truth about them to be told, would simply blow away."  He means that the possibility of portraying an Other in this picturesque oppression justifying style is only possible because the group is vulnerable in some way. Maybe it was smallpox finding the indigenous or HIV finding the MSM ("gay" is the construct name, not the reality) that made them vulnerable, even though both diseases had been killing many other people all along.  Maybe it was the industrial revolution with its destruction and concentration of peoples.

Another current runs the other way: rural was bad but now it's good. Boys who survive are Tom Sawyer, or at least Huckleberry Finn. Men pressed into drug dealing are noble victims. Former Japanese generals are now worthy warriors.  The Outsider version of the Inside is always full of judgment. Or love.

PS: MSM (Methylsulfonylmethane) is stuff you put on food, The abbreviation can also mean MainStreamMedia. When I use it, it means Men who Sleep with Men.