PEOPLE, COLONIZERS AND ROMANTICIZERS, AND ME

"Orientalism proposed that much Western study of Islamic civilization was political intellectualism, meant for the self-affirmation of European identity, rather than objective academic study."  (Wikipedia bio of Said.) So there's a rather cynical but provable criteria for postcolonial thought about a previously colonized people.  As a white Scots-genetic female from the Pacific Northwest, I should be suspected of colonizing Others, but somehow I've challenged that.

Partly it was my farm-girl mother's love affair with the Far East and local Indians (I'll call them NA's for short typing.)  The first came from the stories of Christian missionaries looking for donations and the second came from watching the seasonal workers who camped near enough to the house in Washington state where she grew up that she could watch them from her upstairs bedroom window.  Also, my fourth grade teacher in Portland was Mildred Colbert, an elder of the Chinook who took us through the NA collections of the Portland Art Museum.

Partly it was my love of myth and fairy tale, which then became soft sci-fi (no bug-eyed monsters).  This is romanticism, the love of exotic stories.

Beginning in high school, my education was largely in terms of theatre, how to be "inside" another person expressively, which was a matter of human emotional knowledge framed by bodily sensation. (the Method).  My first job was on the Blackfeet reservation as an English teacher.  Students from that time shaped me.  Now they are dying of old age, ten years younger than white Euros would. It's not genetic -- it's poverty.

I married a man twice my age who was born in 1914 right there in Browning, MT.  His father came in 1903.  Bob Scriver grew up going in and out of the homes of Blackfeet of many types -- very old people born in the 19th century, very poor people, criminal people, drunks, artists, achieving professionals, Pentecostal evangelists, ordinary ranchers and cowboys -- or so they seemed.  I went right along, even as a ceremonialist.  His bronze version of "Orientalism", meaning the romanticization of Blackfeet, is a collection currently housed in Fort Benton, a re-creation of the original emplacement as far up the Missouri River as boats could go because of the Great Falls.

If you can imagine a boundary between peoples that is usually depicted as a circle, though that's not really what it is, those who are inside that "circle" are immersed and possibly unconscious of being part of it.  They are simply "we the people".  Just outside that circle are those who are interested in and attached to those people, even as clients.  The people, like Blackfeet, were treated as a colony.  They take their identity from it and use the emotion and injustice of it to express who they are.

Some of that encircle of outsiders will be using the techniques of Orientalists to define and depict the people inside, picking out the most exciting qualities (the ones that sell the best) to depict and explain them.  They claim to be experts, have the only true knowledge, and get rich at it.  They may try to join the inside. Usually they are people uncomfortable with their growing-up culture, imagining they can find a new home.  Examples might be traumatized veterans of combat or gays, though only a certain kind of gay.

Some expected HIV/AIDS to go through reservations like wildfire, the modern Smallpox, killing many people.  It didn't happen.  The new disease was drugs.  It had nothing to do with HIV because the "virus" was meaninglessness, not mattering.  Alcohol was only first drug.

The culture of the USA, colonizing by trying to capture the poor, has persecuted what was once secret and illegal until it burst out into a whole subculture of gays of many kinds, too soon attacked by both HIV/AIDS and drugs.  These forces are what created the Smash Street Boys, a loose group of young surviving sexworkers with HIV/AIDS.  They realized that their affinity for each other made them into a community that could reach out to others, which is a source of meaning.  Since their families reject them, they make their own family.  The early version was European, even global in some aspects, which meant it easily carried the eroticism of Orientalism, the lure of the other.

The US South version of this group -- some of which were still present as guides and helpers until Trump began closing down HIV clinics and safety net rules -- has been made into a diaspora.  But their computer expertise, their camera dexterity, has maintained much of their identity.  The Puritanical and poorly suppressed understanding of male sex is still colonial, denied, used violently and omnipresently, even in the highest levels of government where the stigma of nonconforming sexuality is a rich source of extortion and blackmail.

So there is a third circle around the insiders who are the first circle of the defined group, and the second circle of admiring and pressing would-be experts and "helpers" who are still colonial and therefore damaging.  A third circle looks at both sides of the original boundary and tries to understand from the "inside" without defining except in dynamic terms, because this is a moving boundary.  That's where I see myself.

I'll never be inside the circle of NA's or of struggling boys, but still partly qualifies me.  I am so deeply opposed to being controlled and told who I am that I easily identify with all peoples who feel that same way.  I try to go there, with thought and sensory response, but I don't want to imitate.  The truth is that some parts of their lives are so painful that short periods are all I can stand, even if they are compensated by times of rejoicing and freedom.

Most clearly this comes from the Sixties in Montana, when the art was a source of income, a philosophy of value in terms of life, and a community of cowboy artists.  Then the latter began to harden into a bureaucracy and the limits of loving the West closed in. It became mercantile. 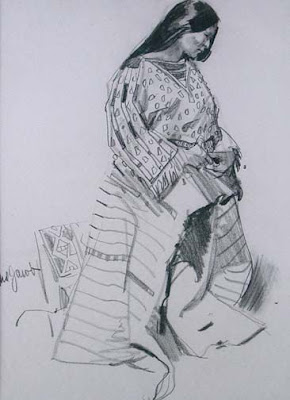 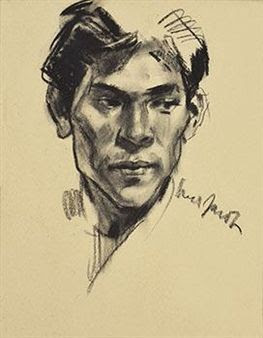 I'll close by "picking on" Ned Jacob, an artist who is my age, who came to Browning very young and then moved on.  He was excellent at the most appealing romanticism of Blackfeet, usually authentic.  But he also loved indigenous people in the most direct and intimate way.  He was just outside the boundary, looking in.  We can see with his eyes.

Posted by Mary Strachan Scriver at 11:47 AM