COYOTES DO NOT STAND ON ALTARS

Mythic.  Misty.  Ubiquitous but vaguely seen.  Smaller than a wolf.  More clever than a cat.  Not various like a dog.  Not solitary like a tiger.  Not indolent like a lion.  North American.  (First sighting of a coyote on the other side of the Panama Canal in 2013.)  Every continent has its signature canid.  Coyotes are ours.  We feel them. 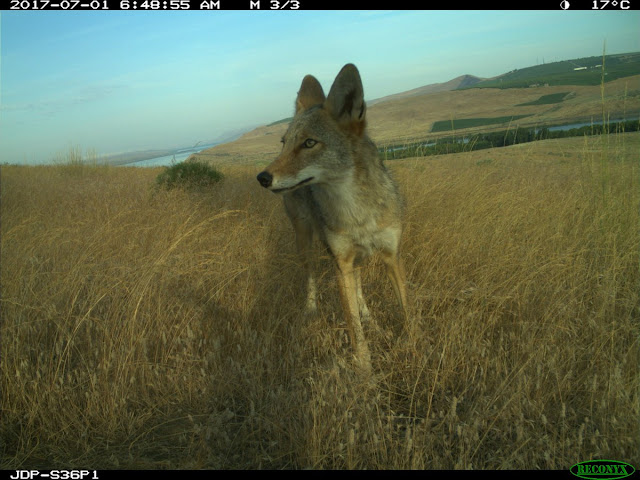 Shape shifter, biological coyote has survived by staying the same always, but changing his behavior -- learning from experience.  Like humans, they fit themselves into the ecology.  They are random, but relevant.  This irony fits humans and is the source of the Sacred , for the animal on the great parched spaces of the West, filling the moonlight with song, is nothing like the predator trotting down the elegant avenues of LA suburbs with the limp corpse of someone's pet in its jaws.  But it is.

Predator coyotes frame as death and danger, but not confrontation.  So many attempts to wipe them out -- guns, poison, traps, fire -- and yet they persist, seemingly the same coyote we exterminated yesterday, ineradicable because they are a phenomenon of the land, close to the ground.  Those humans always at war with them, escalating into violence, become callous and cruel, beginning to enjoy suffering.  Hanging the stiff and bloody bodies on the nearest fence -- upside down.  Believing this shows power.  For the coyote has shifted their shape -- I mean the human killer shape -- and now they will look for more chances to kill.  I mean the human killers beginning to kill other humans.

But the coyote also tells stories, wordlessly, about survival which is the key to survival.  If something does not offer survival, it is Sacred in an evil way, which some call Devilish, always wanting forces to be anthropomorphic.

The topaz gaze of the coyote, level and sometimes blinking, follows us in town and across land.  Only when the sun showers wealth and passion on them and they roll over to sleep, only then do they close their eyes.  They have no special concern for us, except as they must accommodate us.  But in our deep metaphor lives, we seize this canid and make it ours, all about what is hidden and powerful, Sacred -- even though there are no coyotes in the European, African, Asian incorporated religions.  No church controls the coyote.  They are deeper and more autochthonous than that, at the root of the North American Sacred.   Running together, howling to each other, laughing -- when we sight them, we are them.
Posted by Mary Strachan Scriver at 10:09 AM