NOT A CHRISTMAS STORY

So it starts with a one-celled blob that develops a nucleus.  All it knows is to go towards edibles and away from threats.  Some of what it eats are other blobs that keep their identity and become "inclusions."  This goes on until meiosis teaches how to make replicas that stagger, stutter, bind bits of other blobs in their protein-patterning, learn new things.  Evolve. 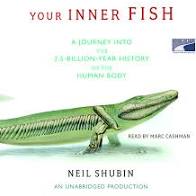 Once creatures get to the stage of having vertebra in a line to organize two sides, they are on their way to us.  Soon they were "your inner fish", then reptiles, and next mammals.  Each stage of development built on what came earlier, adding and subtracting as the situation allowed or demanded.  Then came primates and in maybe a hundred versions, the hominins.  This is a more fantastic and elaborate story than God making little people out of mud, but not that different.  We are humanoids because we came from humus, we are emergent from the earth we stand on.

But we have trouble with our operating manual.  That's a joke.  Jokes depend on consciousness of mismatch, inappropriateness, thinking blunders.  There is no operating manual.  We are like Navajo or Inuit encountering their first fire-driven internal combustion engines, carefully taking it all apart and saving the pieces, hoping we can put it back together.  When they do, they are masters.  But we're mostly still teenagers jumping in, cranking the music to blast, and driving off in all directions.

So mammals still have a lot of reptile instructions in them and humans still have more than ninety percent mammal directions for operation, but only a small percentage of humans is conscious.  We're very proud of our consciousness and use it to consider ourselves.  Still, more than ninety percent of what we think we know is wrong, often merely because we gave the parts and functions names based on what we used to know instead of what we know now.  It is hard to see new things before clearing the old convictions out of the way.  (See LeDoux.) 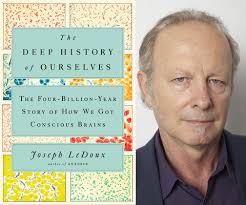 Another boundary is the difficulty of understanding how an MRI works if one's own tools are only hammer and pliers.  Defiantly, people are working hard to understand what it is an MRI or fMRI and other instruments tell us about ourselves.

Human beings want to know about what is beyond our ability to know.  We know we have limits, we keep finding more of them, we don't know what we don't know and never will because humans are limited by their vulnerability, their existence in a world they can only access through the use of tiny electromagnetic codes in the aggregation of one-cells that are their bodies.  Humans only last a century, if that.  We seem to work by aggregating patterns in brain circuits derived from experience, which is an accumulation of sensory information, including some information about what the body is doing to function, though most of that is unconscious,

For a few centuries we've been distracted by the idea of a "brain in a bucket" as the primary identity, but now we know it is experience through time that makes us -- as much pushing against each body as each body pushing against the world.  It can have as many dysfunctions as any auto engine, from missing parts to lack of fuel.

For those who worship computers and add them to cars, consider that one day I had an old car that misbehaved until a smart mechanic took a look.  "It's the computer," he said, and cut the connecting wire.  Then the car worked fine.  It was like cutting the prefrontal cortex of the brain, the part behind the forehead, a lobotomy, removal of that lobe.  Then the human is just a mammal again.  There is a body of literature about what that means.  Ask Tennessee Williams.  Ask a Kennedy.

We want to know about religious experience and God, access to what can't be known by any mammal means, unthinkable but felt by some.  If we run magnetism or electricity through certain parts of the brain, we feel it, or symptoms of it.  But we still don't know the meaning of the universe.

So if we're not scientists we resort to lots of stories: who did what, where they went, what they found, and what it did to them.  Many were destroyed.  Some went and hid.  Others fit into patterns offered by the rotation and tipping of the planet, the ceremonies of climate, the intimacy of another person who miraculously understands us, and the invention of new codes.  Not just those in science but also those of what we call, after ourselves, "humanities," meaning music, books, paintings, and opera.  That sort of thing.

Then there are the biological patterns of family, one person coming out of two other persons and being received into a little circle of people.  When this gets fucked up, there is great damage.  Sometimes great damage drives achievement and insight beyond what one circle knows.  Sometimes that circle is respectful and rewarding.  Sometimes the difference scares or offends them and they destroy that person.

We invent codes of communication and try to use them from one person or one culture to another, with enormous emotional effect that results in cathedrals and wars.  We have never found another kind of being that has bigger and more inclusive ideas than ours, but we imagine them in hopes that we can be like children again and let someone else do the hard and fatal effort of being alive on a planet.  When that doesn't happen, we destroy our sojourn as hominins, not the planet which goes on without us, forever changed.

Porges proposes that the third vagal autonomic nerve connects our brain to the "frame of expression" which is the face, the heart/lungs, and the voice.  This is an instrument of attachment and intimacy, of sharing that needs a new name beyond "empathy," because it is liminal, both sacred and plastic, a virtual kind of contact that not everyone can achieve.  This is the highest human skill we know right now. You could ask for the books for Christmas.