It's impossible to know (at least for me) whether the similarities between artistic and computer driven depictions of the largest cosmological structures and the tiniest human neuron cell loops are the "real" nature of existence or whether one is caused by the other.  Can we ever see anything more than we can think of, i.e. envision?  What we do know is that every population uses the information they have, which is mostly drawn from their ecosystem, to imagine the hidden nature of the sky and the mysterium tremendum that seems to live there.  What we know in our own time is that there is no old man on a throne, no angels sitting on clouds with harps because of no clouds.

Today we have amazing telescopes and -- using augmentations -- we can see all sorts of things, perceived in dozens of ways including just by implications.  Dark matter, for instance, can't be seen by measuring light.  But we can "see" its gravitational pull.  So we construct our own visual equivalent reports of accumulated information and contemplate them in wonder.  Randomness and chaos, which is what we find all around us in daily life, are not part of these constructs. 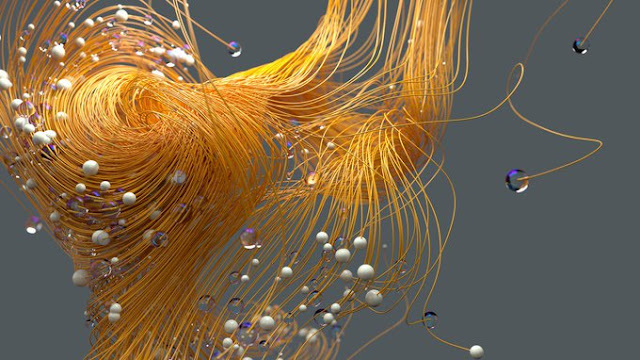 An artist's depiction of the giant structures of the universe.

"These discoveries hint at the enigmatic influence of so-called “large-scale structures” which, as the name suggests, are the biggest known objects in the universe. These dim structures are made of hydrogen gas and dark matter and take the form of filaments, sheets, and knots that link galaxies in a vast network called the cosmic web. We know these structures have major implications for the evolution and movements of galaxies, but we’ve barely scratched the surface of the root dynamics driving them."

"Galaxies tend to form gravitationally bound clusters that belong to even larger superclusters. Earth’s long-form cosmic address, for instance, would have to note that the Milky Way is part of the Local Group, a gang of several dozen galaxies. The Local Group is inside the Virgo cluster, containing more than 1,000 galaxies."

Maybe calling cosmic galaxy clusters something like "Local Group" as though it were a neighborhood is an attempt to make something so overwhelmingly inconceivable just a familiar term, like angels in nightgowns, who would surely not play harps but rather something like a "kithara" or a "plucked chrodophone."  Maybe angels in Appalachia play zithers.  And wear hoodies.

But we don't do that much better.  Scientifically there are four fundamental "forces" that are irreducible, that can't be disassembled.  There's an explanation and a graph here: https://en.wikipedia.org/wiki/Fundamental_interaction  Not much is intelligible but one little part is a left-handed fermion:  "In particle physics, a fermion is a particle that follows Fermi–Dirac statistics. These particles obey the Pauli exclusion principle. Fermions include all quarks and leptons, as well as all composite particles made of an odd number of these, such as all baryons and many atoms and nuclei. Fermions differ from bosons, which obey Bose–Einstein statistics."

And here I thought Bose was a sound system!  I have no thought about baryons.  "The name "baryon", introduced by Abraham Pais, comes from the Greek word for "heavy" (βαρύς, barýs), because, at the time of their naming, most known elementary particles had lower masses than the baryons. Each baryon has a corresponding antiparticle (antibaryon) where their corresponding antiquarks replace quarks. For example, a proton is made of two up quarks and one down quark; and its corresponding antiparticle, the antiproton, is made of two up antiquarks and one down antiquark."

It's all very logical, TOO logical, which means it is interpreting science as something that goes back through Western thought through specific men [sic] who give their names to what are simply guesses.  It's mental Tinker Toy and Leggo construction.  But it is one very effective way of managing a world that is overwhelming.

An essay on Aeon today surprised me by returning to an alternative from the psychotherapy world.  Kirk Schneider is a proponent of the "Existential-Humanistic Institute." His system is the same thing in a way -- concepts from "men" who gave the systems their names.  Here's Rollo May!  I haven't thought about him for a while!  All the other heroes: Maslow, Jung, and a woman I'd forgotten, Kay Jamison who wrote "Touched With Fire: Manic-Depressive Illness and the Artistic Temperament".  It's time I got back to some of this, though it relates more to World War than today's stunning reconfigurations of knowledge.

This is from Schneider's book, "The Spirituality of Awe." in which he defends those who are tormented but don't avoid it.  "But such realisations, particularly if they are to endure, often take time, they take struggle, and they take encounters with larger parts of ourselves that go beyond our internalised oppression to a kind of conciliation. In the end, depth and existential therapy promote a hard-won coexistence between rivalling parts of ourselves, parts that sometimes agonise yet in the long run shed light on the experience of being fully human: of being deeply and richly alive."

"But the looming and overarching question is: at what cost? At what cost is an externally or even cerebrally normalised life, a life of routine and regulation, elevated over a life that flops and flutters but also throbs? At what price is a life that sails over the many-sided intricacies of emotion and the ripples of discontent? Too often the price is death, both literal and figurative . . ."

"I wonder if I would have experienced the rigours of being alone, or being challenged, as I was by my analyst, to develop inner resources such as my creativity, curiosity and imagination. He encouraged me to reflect on the bases for my fears and to move at my own pace. He respected me and my capacities, which in turn spurred me to create drawings, stories and thoughts about life’s puzzlements; or to venture out into uncertain terrains, relationships and ideas, which I eventually did after much tussling and even further therapy."

As a very young child Schneider was overwhelmed by the death of slightly older brother and the grief of his parents.  His first psychotherapy was at age five.  He remarks that if he had been that age in our times he would have been simply given pills to quell the storms.  He calls it "flattening the biology".  It seals over the entrance to what I call "spelunking the unconscious".

But I could have evoked one of our little voyagers into the galaxy, riding the solar wind.  Schneider is of the personal world.  I'm looking for the system that admits the chaos of the inhuman unknown.  Maybe not a therapist but a poet, like my friend who writes in ghastly and obscene terms that can resolve into something transcendent, quite beautiful but not peaceful until death.  Then one needs no words.