Selena Not Afraid, a young Crow woman, has been found dead.  Her death must be marked, attended, mourned, and remembered.  But it is not the whole story.  I do not want Ō’m”kaistaaw”kaa•kii,@mariahgladstone to have that as her only mind picture.  I put against it two other deaths, those of  two Blackfeet, both named Beverly Kittson. 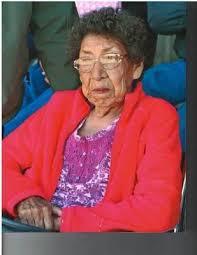 In 1948 she married Jim Kittson and they made their home at Old Agency where she helped ranch, rodeo, started the Busy Badger 4H group that she was also a leader of. She also worked for the County Extension Office as a liason for the Commodity Program before going to work for the Home Development Program and CHP Program as an Outreach Worker and Director, retiring after receiving many awards in her 31 year career. She received the Appreciation award for outstanding and dedicated services, another for 20 years of service from 1968 - 1988 and was awarded the National outstanding CHR award in Las Vegas. She retired in 1998. However, retirement she found boring and she went to work for Headstart as a Cultural Teacher teaching them to speak the Blackfeet, and then on to Blackfeet Comm. College where she was an advisor to the students in the Indian Cultural Program.

Beverly was a well known and well loved woman, who always had an open door and heart for those who came to visit. She loved to bead, sewing and knitting, bingo, playing the machines and traveling as well as being with family (5 generations) and friends for any and all occasions. She was one of the last members of the Green Wood Burners Society and the War Mothers Society.

In 1961 the Browning Elementary School grades were "tracked." For the 8th grade there were four tracks.  The highest was for those with the highest grades but also -- without admitting it -- for whites and tribal families who were prospering.  The bottom was for those who didn't care, who were semi-delinquent, and so on.  In the middle two tracks were classes that were mixed in terms of grades and we sometimes moved them back and forth, but it was just bookkeeping with no regard for relationships. There was no counselling. None of it touched who the person essentially and potentially might be.  One of the least responsive in the 4th group was the father of one of the most responsive and intelligent boys I ever taught.

In those days "boarding school" was not the Catholic Holy Family Mission with its religious focus and determination to impose a culture, nor was it the shameful public school north of Browning where conditions were horrible.  The kids I knew were boarding because their families were too far from Browning to get to school reliably and they bused to the Elementary School daily.  They had formed a family of their own among themselves.

Donna Marie Kittson Guardipee, 71, passed away at Browning Indian Health Service, in Browning, Mont., on Dec. 14, 2019. A wake was held at College Homes with Rosary on Thursday, Jan. 9; Mass was celebrated on Friday, Jan. 10 at Little Flower Parish, followed by burial in Kittson Cemetery at Old Agency.

Donna was born Jan. 31, 1948, in Browning, to Beverly Reevis-Kittson and James Kittson Sr..  She was raised and educated at the Blackfeet Boarding School in Browning until high school, and then went to Chilocco Indian School in Oklahoma.  She graduated from Browning High School.

Donna married David “Chug” Guardipee in 1968 and later divorced. She worked for the Blackfeet Tribe for 50 years as a secretary and office manager.  She was currently working for the Blackfeet Environmental as an office manager.  Her hobbies included going to the local casino, camping, taking rides, picnicking, and especially spending quality time with family and friends.

When people ask me what "Indians" are like, I can't tell them all the stories or trace out all the families, who are so much a part of the indiividuals they are but once I knew them very well, shared my days with them, ate lunch sitting at the same table eating the same chili with commodity cheese.  They were all funny, full of stories -- many of them about narrow escapes or peak experiences.  This is about time for the celebration of the so-called Baker Massacre and some of them were descendants of youngsters who barely escaped and still lived as their grandmothers.

The man who triggered that revenge killing was Malcolm Clarke who lived on what became the Baucus ranch.  He married a Blackfeet woman.  His daughter, Helen Clarke, was educated in the Midwest, acted on the stage and went to Europe in the troupe of Sarah Berhardt, and became the one who assigned the Indian land allotments.  She gave herself East Glacier and lived in a modest house behind the Big Hotel with her brother.  She's buried up the road to the EG water source.  Her nephew was John Clarke, the famous woodcarver who could not speak.

So, Mariah, that's just on the US side!  Plenty of stories among the Canadian Blackfoot.  Someday they will be celebrating that Gladstone girl who taught indigenous sustainable foods and who could fly on a trapeze, way up high.  There's already been time enough for that.  But we won't forget Selena Not Afraid, a Crow girl.
Posted by Mary Strachan Scriver at 10:23 AM