WHERE IS HATHAWAY NOW?

The mismatched pair of detectives stand looking at the crime scene, which they had been sent to because of concerns about something like the death of a child.  One is a tall thin man who once thought of being a priest.  He didn't exactly lose faith, just sort of misplaced it.

"It's hard to take," says Hathaway.  "Where are the guides for a culture like this one? How are we to cope with infanticide?"

Marigold snorts.  She never loses anything.  "Can you fry a small fish?"  She is belligerent, uses anger as her fuel.  What she loses most often is her temper but not to the point of being blind.

"Yes, I know the Tao and Verse Number 60 about doing things very carefully in a nourishing way."  Hathaway was used to the academic practise of identifying sources.  He couldn't quite stop.

"Your problem is that you can't focus.  You think about the vast universe instead of the small specifics of a particular case."

"Ah, yes."  Hathaway was always wryly aware of his troublesome and troubled nature.  "But my mind with its go-with-the-flow way of thinking is capable of catching fish.  I can think like a fish and predict where it will swim."

"Depends on the kind of fish.  Bottom feeder?  Top-of-the-food-chain?  Maybe not a fish?  We gotta keep our options open here."

"What I like is a case like those invading Asian carp, big fat fish that jump right in your boat!"

A gunshot rang out.  Both hit the ground.  Reality is always intervening.  This time the reality was that they were out in a wooded area with a very nervous policeman who came from the city.  He had thought he saw a bear.  "I just fired into the air to scare it off!" he said in a shaky voice.  The two detective scowled at him as they knocked the dirt and leaves off their fronts, pretending to be composed though they weren't.  They both carried notepads and scribbled in the man's badge number.

"There are no bears in this whole state," Hathaway said evenly, always relying on research though it's never possible to know for sure where bears are.  Then their minds went back to the case at hand.

"Just where is this dead child," demanded Marigold.  The officer pointed behind a bush.  The form was very small and had a bit of tarp thrown over it.

Hathaway had no children because he was not able to guarantee them a reliable future.  Marigold had no children because if anything happened to them she would not be able to stand the loss.  But life outwitted her, because to her mind all the children were hers and she could not bear the loss of any of them, not even the worst and most aggravating.  Gingerly, she turned back the tarp. 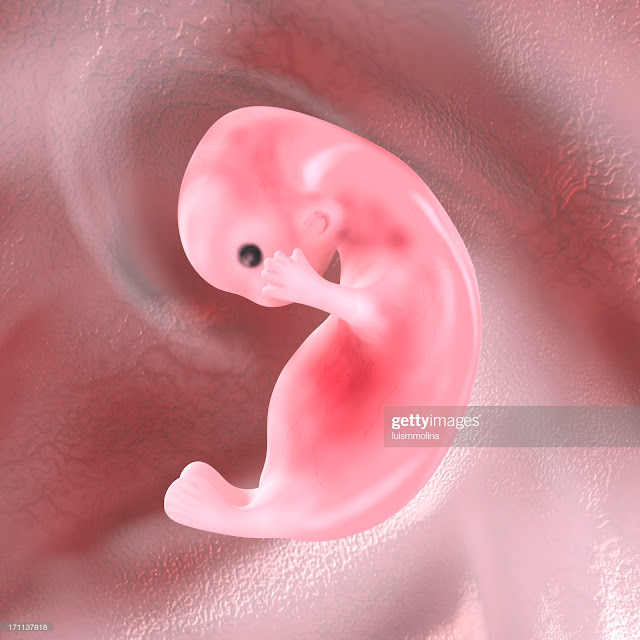 "Is this a baby or a fetus?" asked Hathaway. "Has it passed week 37?"  He didn't know everything after all.

Marigold was enraged.  "Of course it's a baby.  The stage it's in is totally irrelevant."  She paused.  "Is this a human fetus?" she demanded.

"Looks like it to me, but is this a deliberate abortion or a natural miscarriage?  Did it happen here or was it brought from somewhere else?"

"Don't you dare call this little mite 'it' when he or she was certainly a child, a baby, a human being even though incomplete."  Marigold was indignant and Hathaway was contrite.  He recognized the justice of that.  But was this far enough developed to be either he or she yet?

Going to what was obvious, he said, "There's quite a lot of blood.  Who would do an abortion all alone in the woods? Or was there someone else involved?"

"Someone who knew it was a crime, you idiot!"  Luckily, Hathaway made it a practice to ignore all name-calling.

"You're full of love, Marigold," he said mildly.  "I expect the mother was desperate one way or another.  We'll have to know the motive."  He thrust his hands into his pockets, a little harder than necessary.  "Well, anyway, if this is a fetus rather than a baby, it's not a case for murder detectives."

"Maybe we'll have to get a higher authority to decide that."  The two of them stepped back to make way for the coroner's crew with their snapping cameras and evidence collecting bags.  The body bag they had brought was so much too large as to be useless.  The naked little curled bit of flesh fit into a small zip-lock evidence bag.  But they were trained respectful people who didn't make jokes.

The cop who was worried about bears had been abashed and to keep out of sight had been poking around in the underbrush.  Pretty soon he found something he wasn't really looking for.  "Detectives??" he called.  He was pretty sure this discovery might redeem him.

They came slowly, watching where they stepped as was their habit.  The cop had found the mother, quite dead and quite young.  She was sprawled in plain sight with no evidence of struggle or footprints, not even those of her own tennie runners.  Her jeans were pulled up but darkly stained with blood.  Her nail polish was black and her hair was pink.  Her long sleeved shirt might hide both tattoos and needle marks.  The cop went to call the coroner's crew to come back.  They would need their body bag after all.

This was not morally debatable or even unusual.  The detectives made their notes according to their usual pattern of description, estimates, possible theories.  The main question was what caused the death, but as they say in all the best cop shows, that would depend on what the autopsy showed.

Back in the car, returning to the station, the two detectives didn't say much.  The predictability of the girl's death almost overwhelmed the earlier surprise of a baby that wasn't quite a baby yet.

Finally Marigold asked, "How old is a fetus before it becomes ensouled?" She didn't quite expect an answer but Hathaway had thought about it years earlier.

"Some equate it with 'quickening' which is when the mother first feels the fetus move.  Pope Benedict wanted it to be the moment of insemination."

"Oh, God," said Marigold.  "My cat is pregnant.  Last night it was on my lap and I felt the kittens myself.  Do kittens have  souls?"

"Where would Benedict say the girl is now?  Francis would take her into Heaven."

"But where does a fetus go?

"Limbo.  Maybe that's where we are ourselves."

Posted by Mary Strachan Scriver at 4:19 AM