In 1975 at the direction of my boss, I created an education program for the Multnomah County Animal Control.  This meant that I was "management" rather than being an officer out in the neighborhoods in a truck.  I was given a corner office and a car.  (A partitioned-off part of the reception area and a very old sheriff's stake-out car with an excellent sound system.)  This had a big effect on my self esteem.

I decided that now that I was respectable, I should find a church I could belong to without regrets.  When I passed a flat brick wall with a door and "First Unitarian" in aluminum letters, I thought that this was the kind of serious, no-frills sort of place I could appreciate.  But it turned out to be the back door.

Inside I went down a long dark hallway to the main sanctuary, flooded with light.  It was a pale, elegant, no-stained-glass hall with a muted tapestry of the Tree of Life in front instead of a naked dying man.  Listed on the National Register of Historic Places, it was designed by Jamieson Parker in Classical Colonial style.  If I had approached it from the front, I might not have gone in.  I did not know the congregation was recovering from the loss of a long-time minister and a disastrous fire started by allowing hippie youngsters to sleep on the pews.  One of them was disturbed and hostile enough to start the fire.  The Outside-In program for homeless kids was continued, still is.  The new minister, Alan Deale, in his red Harvard academic robe had restored order, but only just. 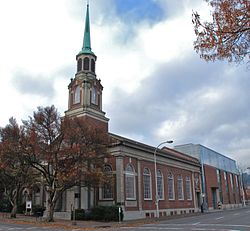 A backbone of justice and perseverance was characteristic of the church at that time, but they were also generous and graceful.  Things were done according to the rules, with respect for each other.  The rather unhinged passionate people who are often attracted to the movement were not there.  Portland itself was still mostly a reserved orderly place with a strong hint of Boston.  (Many of the early residents and the namer of Portland were from that area.)  This church had helped to found Reed College as well as the most prominent mental hospital, which was on the side of Mt. Tabor.  The early minister, Thomas Lamb Eliot, a relative of T.S. Eliot, could be seen driving his horse and buggy up Hawthorne Street to visit students or patients. History, status, and gentility were keys.

I identified with this church, considered it very much who I was, joined and participated and even became a candidate for ministry with the support of these people.  Once ordained, I served as a circuit-rider in Montana, which wore me out though I loved it, then as an interim in Kirkland, across the lake from Seattle.  A family-centered group of artists, educators, therapists, and other lively colorful people, with them I thrived.  Then I went to Saskatoon, a small spare group in a city that knew hardship and did not like indigenous people.  It was a bit wonky, needed a lot of work, and was not the right fit for me.  They have found other leaders who were fitting, some of the most problematic members have died of old age, and now they defend the indigenous.  But I had hit my limits -- which were in me rather than them -- and left the ministry.

Congregations vary according to the conditions of their times and the occupants of their pews and pulpits.  They often look very different from the vantage point of the pulpit. "Religious" journeys can take a person through strange places.

But wait.  Back on the Blackfeet Rez where I had been for a decade, I was asked to hold the pulpit because their candidate, a chaplain from the Navy in Florida, had abruptly changed his mind and left.  The idea was that because I was ordained, my living in the parsonage would mean it could keep its tax-free status and since I was living there free, the church wouldn't pay me.  The parsonage was a little "ranch" on a gravel flood plain on the West side of town.  I was delighted.  I'd enjoyed the church as a community when I first arrived there in 1961. The minister at the time, Jim Bell, was an earnest and authentic tall Texan.

Browning Methodist Parish had no idea how I would preach, and only the vaguest understanding of denominations and so on. I went by the Christian liturgical guide that took churches through the Bible.  Unitarians, presumably, went by the basic principles of the denomination which were broad, historic and thoughtful with no pre-eminence to the Bible.  Drawing my theme from the abstractions of the Christian Bible guide, I filled the theme with images and metaphors from the Rez, especially the opening words, the prayer and the dismissal.  Sermons were stories rather than theologoy.  The people were pleased.  It was a happy year.

But I went back to my old childhood desire to be a writer, though I didn't know what that meant or how to do it.  In the end I had to return to Portland and took another civil service job (animal control is a civil service job) as a clerk until my mother's death six years later gave me enough money to move to Valier where I live next to the Baptists, kitty-corner from the Lutherans, across town from the Methodists and Catholics. Jehovah's Witness sold out and left town. The population of this village is about 300 or 400.

When in 1938 my mother had come to Portland through marriage, she was a dedicated Christian and churchgoer, with two streams of connection.  Her father was a Presbyterian, active and faithful but contentious until pledge-time, when he picked a fight so he could leave until the drive was over.  Her mother was a Baptist as a girl, but attended with her husband.  Luckily the two churches in Roseburg, OR, were next to each other and she could find an excuse to slip over for the comforting Baptist sermon.

My father was an atheist and liked talking about it.  He considered it Progressive.  My grandfather made it the focus of his objection to this marriage and did not attend my mother's wedding, nor did he let her mother attend.  His mild brother and wife acted as parents. The marriage was in a Presbyterian church in Albany where she had been going to college.

In Portland my mother was impressed by Westminster Presbyterian Church, a great stone edifice in the neighborhood, a little too far to walk.  It was prestigious and and conservative.  As a toddler, I was led to the basement Sunday School area and left there to wait.  We were early so there were only tiny empty chairs, a sea of them, so malevolent that I freaked out.  My mother had to be found to take me home.

Then we went to Vernon Presbyterian, much humbler and closer.  The neighbor in back of the church was a Chinese immigrant family.  The ambitious minister was horrified by fish drying on the swingset and turtles kept scrabbling in a box before being made into soup. The daughter of the family (very Christian, converted by missionaries and helped to immigrate by them) was in the 5th grade with me, a close friend throughout my life, my first lesson in racial tolerance.

In college at Northwestern, taking seriously the religion classes I chose, I felt I was no longer Presbyterian, maybe not even Christian, so I wrote a letter withdrawing my previous pledge of membership.  That ambitious minister condemned me from the pulpit, saying that I was heretical and faithless, corrupted by a snobbish place.

My mother rose from her pew and walked out.  She said the minister was just angry and resentful because his own daughter, about my age and an aspiring poet, couldn't qualify for a scholarship as I did,  so had to go to Portland State, much lower status.  She was probably right.

The story of my original membership in the Blackfeet Reservation Parish will continue later and has been partly told.  This is all background for what comes next.
Posted by Mary Strachan Scriver at 7:12 AM