For decades my on-going project has been a theory of what happens during intensely meaningful moments, particularly those hoped for during ritual celebrations.  I thought of it as "religious."  I think I sort of "caught" the idea like a local virus on the U of Chicago campus between 1978 and 1982.  About "feeling" rather than rationality, which last has been the marker for Unitarian thought for decades, my thinking has gone through many stages and morphs, partly because human knowledge has been exploding -- one might say since the atomic bomb explosion.  But I persist in pursuing "felt meaning" and find significant writing about it.

I keep a big notebook of ceremonies of all kinds, from a New Guinea ritual sequence about the cassowary to the Uruguayan soccer team whose plane crashed in the mountains, forcing them to cannibalism.  There was a marriage in which the groom was dead, killed on his way to the wedding, but the bride was alive and asked her clergyman to go ahead.  I included some theories by a sequence of Unitarianians, which caused a major world expert on ritual to direct me to go to my own denomination.  Experts love boxes.

I called this big pile of pieces "The Bone Chalice" meaning it to be a curtsy to the flaming chalice sigil of the Unitarians, but reinterpreting it as brain thought.  That was before I knew formally about embodied cognition, which suddenly reconfigured everything.  Acting training via the Method is about whole-body thinking, both emotion and rationality, working with muscles and sense memories to evoke a character.  My acting class approached through classical Greek drama, which is highly emotional as well as thoughtful.  But confusingly, the first ideas about "cold" rational proto-scientific thought were also Greek and Roman, even as the Isle of Lesbos supported unconventionality.

This double beginning to "Western" thought, the science and math part being elevated to primary and the emotional part contaminated with male moral judgement, has taken us centuries after Descartes to the belief that science is real and religion is a kind of fantasy where one takes refuge from the brutality of life.  It's called "faith" and defined as believing in something that might not be true.  This is psychosis.

So I just dumped the whole meshuganah that was "religion."  A big rolling and struggling ball of phenomena, the concept pulled in government and institutions, rules for health and restrictions on the marginal, community morality and the control of money.  None of it was what I was thinking about.  It was hard to give up the neat skull/chalice image I found.  Sigh.  And "The Bone Chalice" was a title I had to discard.  Double sigh. 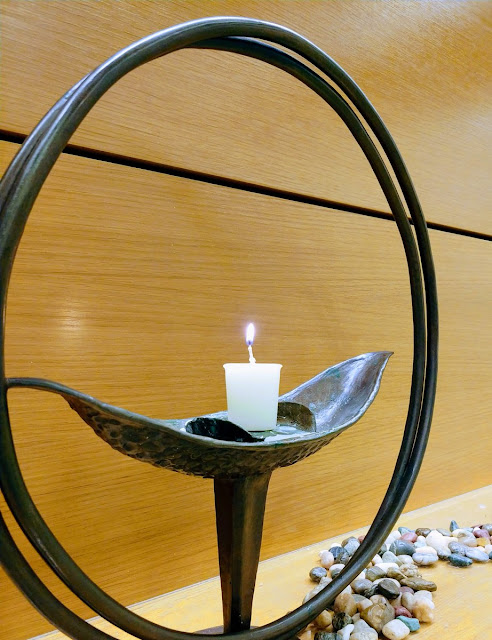 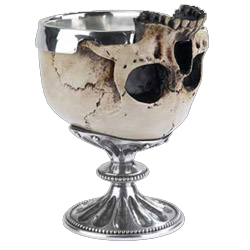 The sigil I wanted

I did complete seminary.  The PNWD-UUMA (Northwest clergy) had a study group that met at Humptulips, Washington, because they were mostly head-trippy guys who took a bumblebee's point of view of flowers (sexual), so the name sounded vaguely naughty.  Actually, it's a local indigenous place-name meaning "really rainy" and it was.  They assigned topics to newcomers that they thought would challenge and shake them up, so since I was one of the early women I was assigned the task of explaining gender-centered religion.  That is, they assumed I was a feminist, admitted Christianity both culturally and doctrinally, was paternalistic.  They were expecting a female tirade.

I wanted to outwit them.  I went to early writing, especially by female saints.  Saint Theresa, for instance, as depicted in sculpture by Bellini was positively orgasmic.  More sexual than gender-assigned.  What struck me in the writing of female Christian saints was their accounts of what I would now call "dissociation": leaving earthly reality for paradoxical self-contradicting sensory experience:  dark/light, hot/cold, falling/held, thirsting/sated, and so on.  The figures she described seemed as though they were going to the most basic sensory capacities, ones that a person were born with -- concepts inexpressible because the expresser had no words.  Perhaps the epiphany was so impressive and intense because the memories were so early that they were part of the elemental structure of perception.

My first ministry was a four-point charge: four small fellowships in Montana.  I lived in a old van and on Sunday preached twice, once in the morning and a hundred miles later in the evening.  There was lots of time to think while I drove and while I lay in my sleeping bag waiting for sleep.  In three years the extension ministry was ended and I took on conventional churches.  I was surprised not to fit them.  They were about compliance, social respectability, and the group's consensus about what was true.

When I left, returning to the Blackfeet Reservation where I had once been included in a small circle of Old-Time believers, they had died of old age.  I was asked to serve the Methodist parish.  To keep the integrity of their denominational support, I used a pan-Christian calendar of Sunday themes based on the Bible and meant to take the liturgist through the year.  There were four quotes: OT, NT, Psalms, and Gospel.  I figured out the common subject and translated it to the terms of the rez, which worked well since this is also a tough land with a lot of wind and political drama.  Then I began to see how the images and even the dogmas came from real life.  I was using Lakoff's and Johnson's premise that all thinking is metaphor, first as the basic construct of what one's world-theory is about and then the smaller comparisons we use to explain what we do.  This fits all the ritual scraps I've saved.

Over the years on this blog I've accumulated enough material to publish as an anthology or to rewrite into a composed "book" though at 79 I'm running out of time -- my eyes are suffering.  But I've lost my sigil and my title.  I see an old post called "The Turning Moment."  That has possibilities.  What metaphorical image can I find? Dance?  Someone looking over their shoulder?  Something sidereal?  It's equinox today.  Is not this the turning moment?

Now the sun strikes the altar. 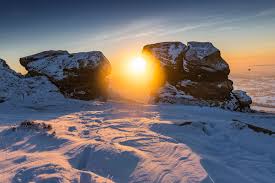 Posted by Mary Strachan Scriver at 10:55 AM